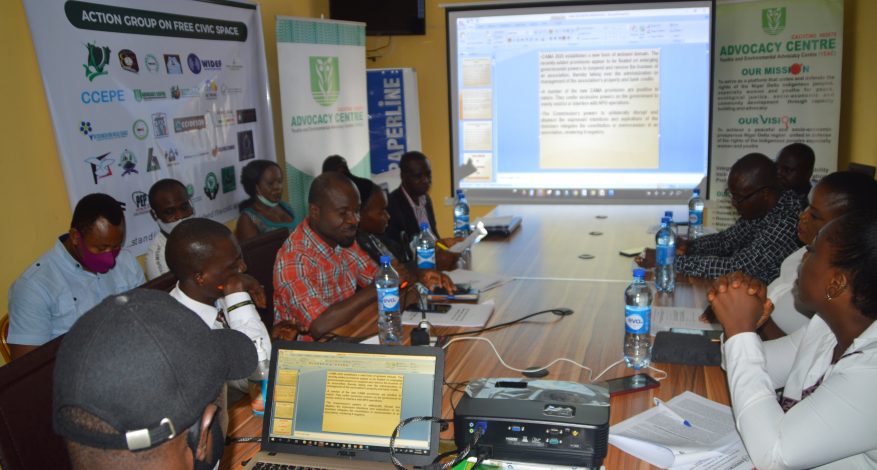 Youths and Environmental Advocacy Centre (YEAC) under the auspices of Action Group on Free Civic Space on Wednesday, September 16, 2020 organised sensitization program and press briefing on the Companies and Allied Maters Act (CAMA) 2020 recently passed into Law and assented to by President Muhammadu Buhari on August 7, 2020. The sensitization and press briefing on CAMA which held simultaneously in many States of the federation among the Action Group members saw the lead organizations sensitize the non-profits organizations (NPOs), civil society organizations and other stakeholders in Rivers State that were represented at the event also attended by different media organizations. This program was aimed at helping nonprofits better understand the latest revisions of the law and its implications on legitimate charitable operations in the country as well as improve NPOs’ knowledge of their statutory responsibilities under the new provisions of CAMA 2020.

Equipped with a better understanding of the CAMA 2020, participants demanded for an urgent review of the CAMA 2020 recently passed into Law as some of the provisions under Part F that deals on issues of non-profits issues do not only contradict some sections of the Nigeria’s 1999 Constitution (As Amended) but also imposes multiple regulations on the profits thus shrinking civic space in Nigeria. Participants particularly fawned at series of provisions of the CAMA 2020 that targets to take over the leadership and management of trustees simply because their bank accounts were dormant among others.

The ACTION GROUP ON FREE CIVIC SPACE represents a loose network of over 85 organizations, student unions, social movements, and active citizens across Nigeria, working on different thematic issues, but committed to ensuring that government regulation in the name of national security does not shrink the civicspace in Nigeria. Civil society organizations, under the auspices of the Action Group on Free Civic Space, have examined the newly-introduced legal provisions of the Companies and Allied Matters Act 2020. Deeply concerned about several provisions of the new law that hold enormous potential to restrict the civic space and limit constitutionally-protected freedoms, we make the following observations:

Excessive Focus on Properties Belonging to Associations: The fixation on sacking an association’s trusteesand taking over the administration or management of an associations property and bank credits is deeply worrying. The entirety of S. 839 (6) represents a new form of eminent domain. Empowering the Commission to vest the association’s property in the hands of an official custodian, or order debtors to discharge their liabilities in an interest-yielding account held by the Commission for the benefit of the association, and to restrict the association’s transactions, essentially take away property rights just as much as an eminentdomain does. Theonly difference is that the CAMA provisions allow the government, through the Commission, to evade the just compensation requirement throughthe trick of appointing interim managers.

in nature and confer excessive powers on the government to overly restrict or interfere with NPO operations in the country. There are no provisions enabling associations to use their internal controls to take corrective actions when their activities go off track, denying registered associations the opportunity to use their internal mechanisms to self-correct or redress any perceived or actual wrongs. External intervention should only be initiated as a last resort where internal mechanisms have been inefficient in dealing with corporate governance issues. Under the new CAMA, the Commission may dissolve an association with dormant bank accounts and transfer the amount standing to their credit to another or other associations. This provision interferes with the rights of members of an association to freely dispose of their assets upon dissolution. It also changes the rules that govern how owners can use or dispose of their property.

Relegation of the Association’s Constitution: The Commission will have the power to override the terms andconditions espoused in the memorandum or constitution of an association, which represents the collective agreement of the members for the running of the association. These registered objects are rendered nugatory where the Commission can unilaterally discard them (in the public interest) and take over the affairs of an association, including imposing new trustees and managers, without the consent of the members of the association. Foisting interim managers and official custodians who do not share the same values and ideals with the members of an association, forces unlike minds to come together to run the affairs of the body amid glaring disparities in their vision, cultural perceptions, ideas, and common goals.

Inconsistency with Constitutional Freedoms: The freedom of association is an essential determinant of civicspace as it guarantees the right of individuals to form, join and participate in associations, groups, movements and civil society organisations. CAMA 2020 Section 839(1) provisions do not meet the internationalobligations and standards of due process, as they infringe upon the freedom of association and restrict directly its operations by a discretion decision of the government body (the Commission). Any such decision should be a part of the judicial process because it constitutes a sanction, in its legal nature, towards the association and its governance and management structures. It also infringes on the independence of the association to choose their own governing and management affairs independently. By interfering with the rights of associations toassociate and self-govern freely, Sections 838, 839 and 842 of CAMA 2020 contradict constitutionally-protected freedoms, especially the freedom of association.

Furthermore, sections 838, 839 and 842 of CAMA 2020 are inconsistent with 43 and 44 of the 1999 Nigerian Constitution which guarantees the right to acquire and own property and to freely use and enjoy such property without interference. The combined force of Sections 43 and 44 of the Nigerian Constitution ensure thesanctity of all property, both movable and immovable, by prohibiting the taking of such property without cover of law, compensation, and access to the courts. The protections offered by Section 44 of the Constitution are broad, covering all types of property and forms of interest. As such, these protections extend not only to land, but also to immovable property, such as cash in banks, housing, and to moveable property, including office furniture and other items. Consequently, forced takeovers envisaged in the new CAMA prima facie violate the constitutional right to property, regardless of whether or not there has been misconduct or mismanagement in the administration of the association.

Duplication of Roles and Regulatory Overlap: The Commission’s power to investigate fraud, misconduct andmismanagement of an association, suspend the trustees of an association and appoint interim manager(s) to take over the administration of the body, duplicate the roles of existing regulatory agencies charged with uncovering and punishing financial crimes such as the Special Control Unit Against Money Laundering and the Economic and Financial Crimes Commission (“EFCC”), established under the Economic and Financial Crimes Commission (Establishment) Act, 2004. More tellingly, all the new legal additions to the CAMA law create thepotential for regulatory capture. When that happens, the Commission could hide under the cloak of omnibusclauses like ‘public interest’ to target particular organizations and divert their assets to other favored associations.

Compliance Would be Onerous, Time-Consuming and Possibly Ineffective: In addition to the regulatoryoverlap, the duplicity of regulatory functions shall result in multiple reporting obligations to different entities. Increased reporting to multiple agencies means a higher workload for registered associations andnon-profits in particular, requiring additional resources to ensure daily operations match regulations correctly. For many entities, especially the smaller non-profits, compliance with the plethora of reporting obligations to multiple entities can be burdensome as considerable time and resources are expended on satisfying legal requirements than on their actual humanitarian work.

The ACTION GROUP ON FREE CIVIC SPACE lauds the efforts of the Commission to introduce legal reforms aimed at easing the processes for running the affairs of corporate bodies, and tackling corporate governance challenges internally and externally. However, the duplicity of roles and overlapping regulatory powers hampers the development of democratic processes by encouraging the waste of scarce public funds, weakening existing institutions and creating excessively complicated administrative procedures for law enforcement. The recent revisions to CAMA are particularly reminiscent of the prescriptions of the rested 2016 NGO Bill sponsored by Umar Buba Jibril, which aimed to interfere with NGO assets. 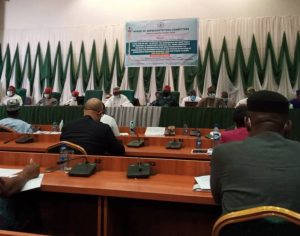