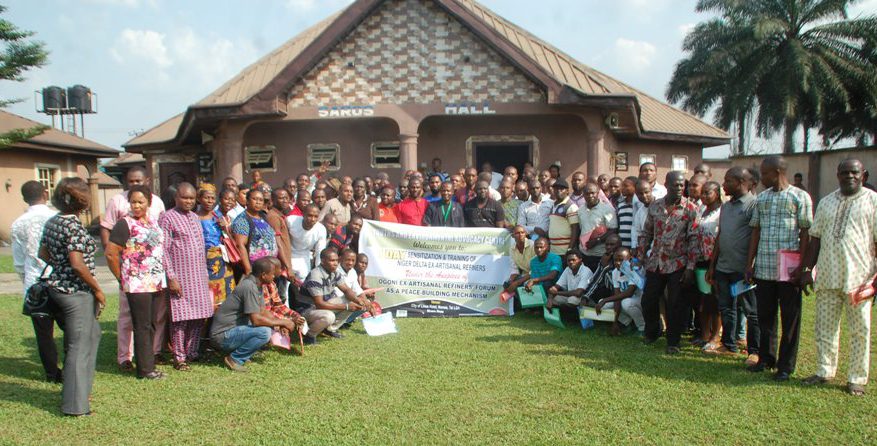 The training which held in Ogoniland was attended by Ex-Artisanal Refiners from Rivers, Bayelsa and Delta States.

Participants were exposed to trainings on “How Ex-Artisanal Refiners Can Channel Grievances/Demands without being violent; The Roles of Ex-Artisanal Refiners in Ogoni and Niger Delta clean-up” as well as “Modular Refinery & Ex-Artisanal Refiners; How they Key in and benefit”. The training was organized for those artisanal refiners who have voluntarily abandoned oil theft and acts of artisanal refining that contributes to the environmental pollution in the Niger Delta region of Nigeria as a way of disabusing their minds from returning to the act. The engagement was also a way of preparing them to benefit from the federal government proposed modular refineries in the Niger Delta to create opportunities for youths engaged in acts of oil theft and environmental pollution.

The physical training was part of ongoing media campaigns by YEAC for both the multinational oil companies and illegal hydrocarbon refiners to stop further pollution of the environment and call on government agencies to speed-up the environmental clean-up of Ogoniland and other polluted parts of the Niger Delta region. Earlier before the field training programme, YEAC had been carrying out advocacy on radio through jingles which can also be listened to here https://soundcloud.com/youths-and-environmental-advocacy-centre/yeac-radio-environmenatl-advocacy-jingle-2017

(Photograph of cross section of participants during the training)

Speaking on “How Ex-Artisanal Refiners Can Channel Grievances/Demands without being violent”, the resource person, Dr. Bieh Nwoke, Nwoke called on the ex-artisanal refiners to be peaceful and channel their grievance whenever one arises through constitutional means and call on those still engaged in the act to stop forthwith. Dr. Bieh further addressed the media thus; https://youtu.be/a7tSTVDx66g

On his own part, Mr. Christian Lekia, another resource person highlight the roles of ex-artisanal refiners. Mr. Lekia who is the Executive Director of Niger Delta Coalition Against Violence (NDCAV) to include conducting themselves peacefully for clean-up to thrive, engaging in meaningful activities by making themselves available for employment, etc.

Mr. Piriye Kiyaramo, S.A./Liaison Officer, Office of the Special Assistant to the President on Niger Delta and Presidential Amnesty Programme who was also present at the training spoke to the ex-artisanal refiners on “Modular Refinery & Ex-Artisanal Refiners; How they Key in and benefit”. Mr. Piriye called on the Federal Government to make real, its proposed modular refiner and ensure that the original people who were engaged in the bush refinery benefit from it so that they can stay off the creeks and safe our environment. A short videos of the training session can be found here; https://youtu.be/CjV0sRlOAzE and here https://youtu.be/8sl1P3ic5rE

Also speaking at the event, Mr. Fyneface Dumnamene Fyneface, the Executive Director, Youths and Environmental Advocacy Centre and the Research/Project Officer, Energy & Climate, Social Action congratulated the ex-artisanal refiners for towing the part of honour and voluntarily discontinuing the act of oil theft and artisanal refining to safe our environment. He call on those still engaged in the act to stop especially as government is taking steps to clean up the Niger Delta region, starting from Ogoniland where the United Nations Environment Programme (UNEP) Report 2011 is being implemented. Mr. Fyneface further said the training and engagement would be a continuous one to keep them informed and exposed to opportunities that may be available as alternative livelihood sources.

(Group photograph of participants at the event)

Representatives of Niger Delta Ex-Agitators for Peace Organization (NDEPO) within and outside the Country with over 156 Niger Delta Ex-Artisanal Refiners participated and benefited from the training with some of them sharing their experiences with the media thus; https://youtu.be/OAG4Gxq_eu8. Highlight of the event was the appointment of the Executive Director of YEAC, Mr. Fyneface Dumnamene by the ex-artisanal refiners to coordinate them, unite them and provide them necessary leadership and platform that would enable them benefit from the federal government proposed Modular Refineries proposed for youths in the Niger Delta Region. Mr. Fyneface is to function with other inaugurated members as the Regional Coordinator, Platform for the Coordination of Niger Delta Ex-Artisanal Refiners.