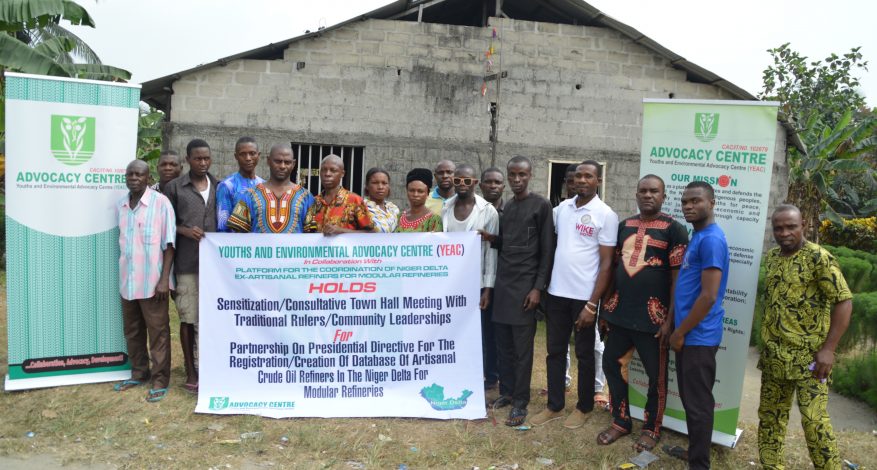 Youths and Environmental Advocacy Centre (YEAC) in collaboration with Platform for the Coordination of Niger Delta Ex-artisanal Refiners for Modular Refineries on Thursday, February 6, 2020 on invitation by the traditional Ruler of Gio Community in Tai Local Government Area of Rivers State, Chief Fidelis A. Nkerelo sensitized and held a consultative town hall meeting with artisanal refiners in the community on presidential pronouncement for the creation of database and formation of Cooperative Society to benefit from licenses for the establishment of Modular Refineries. Chief Nkerelo like his counterparts in other parts of Rivers State and the Niger Delta where its youths are involved in artisanal refining, he had earlier received a letter from Advocacy Centre, requesting for partnership for the registration and creation of database of artisanal crude oil refiners and formation of Cooperative Society for them to benefit from licenses for the establishment of Modular Refineries as President Muhammadu Buhari, GCFR directed the traditional rulers to do during the inauguration of the National Oil Spill Detection and Response Agency’s (NOSDRA) Laboratory in Port Harcourt on Friday, January 10, 2020. The President was represented at the said event on January 10, 2020 by the Minister of State for Environment, Mrs. Sharon Ikeazor.

Speaking at the program, the Executive Director of Advocacy Centre, Fyneface Dumnamene Fyneface thanked the traditional ruler, council of chiefs, elders and the community leadership for the opportunity to sensitize them and the youths who have been involved in artisanal refining in the community. The traditional ruler who was represented at the event by the Chairman of the Community Development Committee (CDC), Mr. Akwae Simple Joseph expressed appreciation to Advocacy Centre for coming to sensitize the community adding that the activities of artisanal refiners have contributed to environmental pollution and loss of livelihoods for fishermen and farmers in the community and that the  steps currently being taken by government to provide them with licenses for modular refineries would solve the unemployment program that drove them into the acts. Advocacy Centre had earlier had a meeting with the community paramount ruler and council of chiefs that paved the way for this sensitization. {The Executive Director of Advocacy Centre, Fyneface Dumnamene (4th from left) and the Paramount Ruler of Gio Community, Chief Fidelis A. Nkerelo (5th from left) and other Council of Chiefs members and YEAC volunteers during the earlier meeting with the council on February 2, 2020}

The community leadership and youths were sensitized by graphically presenting the backgrounds to efforts earlier made aimed at mobilizing youths to benefit from modular refinery with a view of ending their activities that contribute to pollution and black soot among others. Highlights of the sensitization was the presentation of registration procedures expected to commence as soon as partnership agreement with Advocacy Centre is entered with the community leadership for the creation of database, formation of cooperative society and requesting for modular refinery licenses from government with their counterparts in other parts of the Niger Delta. Reacting to the sensitization, participants asked questions like “Since government want the act of artisanal crude oil refining in the Niger Delta to stop in order to build modular refinery, will all of us involved be able to work there?”, “After the license is acquired, how long would it take for the modular refinery to be built and we start working there?”, “Who will provide the land needed for the modular refinery?”, “How are we sure that the politicians and bigger boys will not hijack the modular refineries from us the masses and leave us to suffer?”, etc. Another participant in his comment said “the Federal Government should clean-up Ogoni land and water for the communities before they will embark on modular refineries because the community is living in abject poverty”. (A cross section of participants)

This sensitization and consultative meaning would continue in other Niger Delta communities in the days ahead following the presidential directive on January 10, 2020 in fulfillment of the government 2017 promised on modular refineries for youths in the Niger Delta. This modular refinery initiative of the Federal Government is in response to our campaigns and would among others address issues around artisanal refining in the Niger Delta to reduce pipeline vandalism, oil theft, environmental pollution, loss of revenue and create jobs for the youths which are in line with our aims and objectives at ADVOCACY CENTRE. 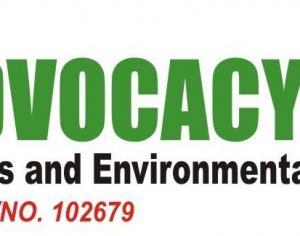 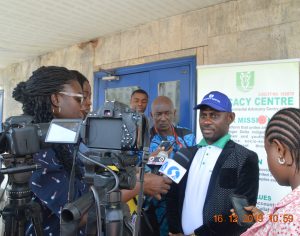 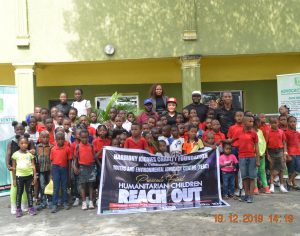 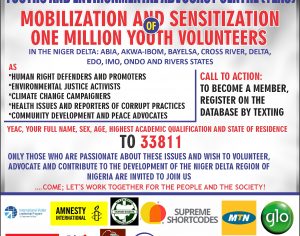 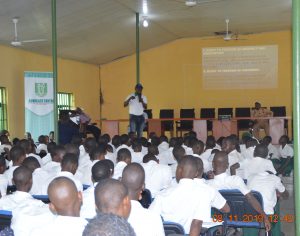 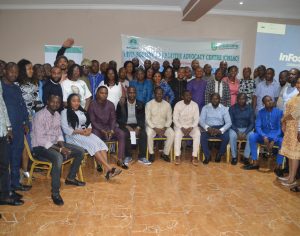