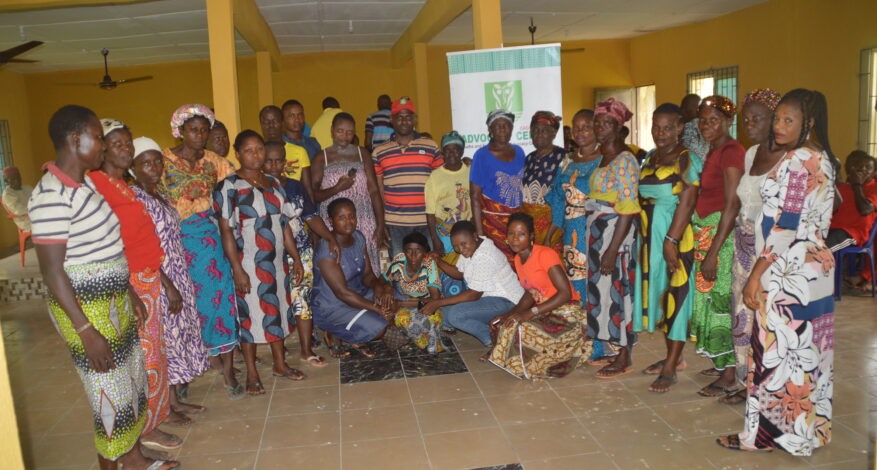 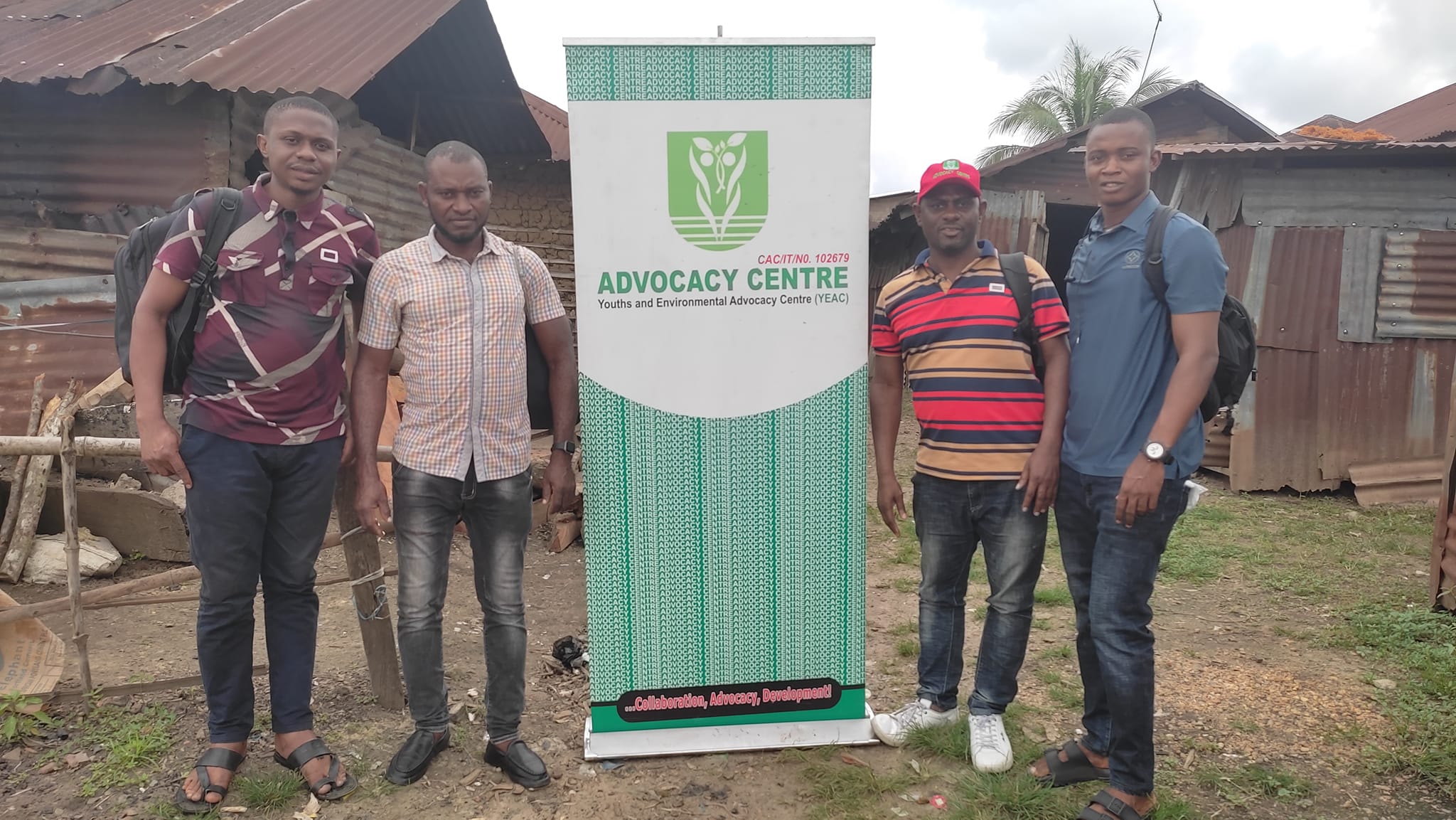 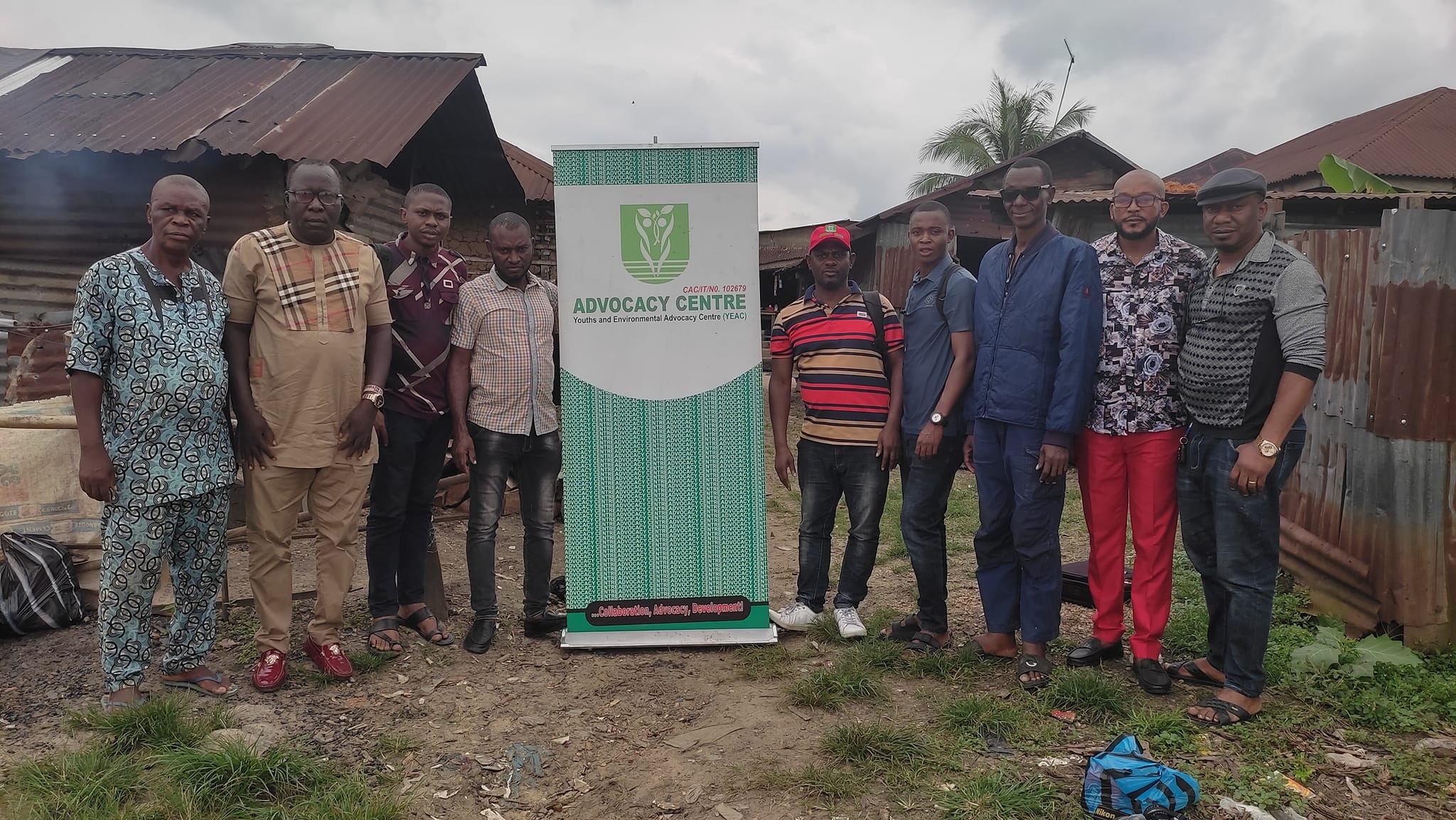 The President General (PG) of Umuolu Community, Engr. Tabowei Isicheli had earlier received a formal letter from Advocacy Centre, signed by its Executive Director, Fyneface Dumnamene Fyneface informing him,  community’s leadership and members about the selection of Umuolu as the first community to benefit from the Solar Mini Off-Grid Electricity Project if it is accepted after the community engagement and sensitization town hall meeting that “…will enable us explain all the details of this project through a Free, Prior and Informed Consent (FPIC) process; present all the documents about it and answer all the questions you and the people may have to enable the community decide to either accept or reject the installation of the Solar Mini Off-Grid Electricity Facility”. 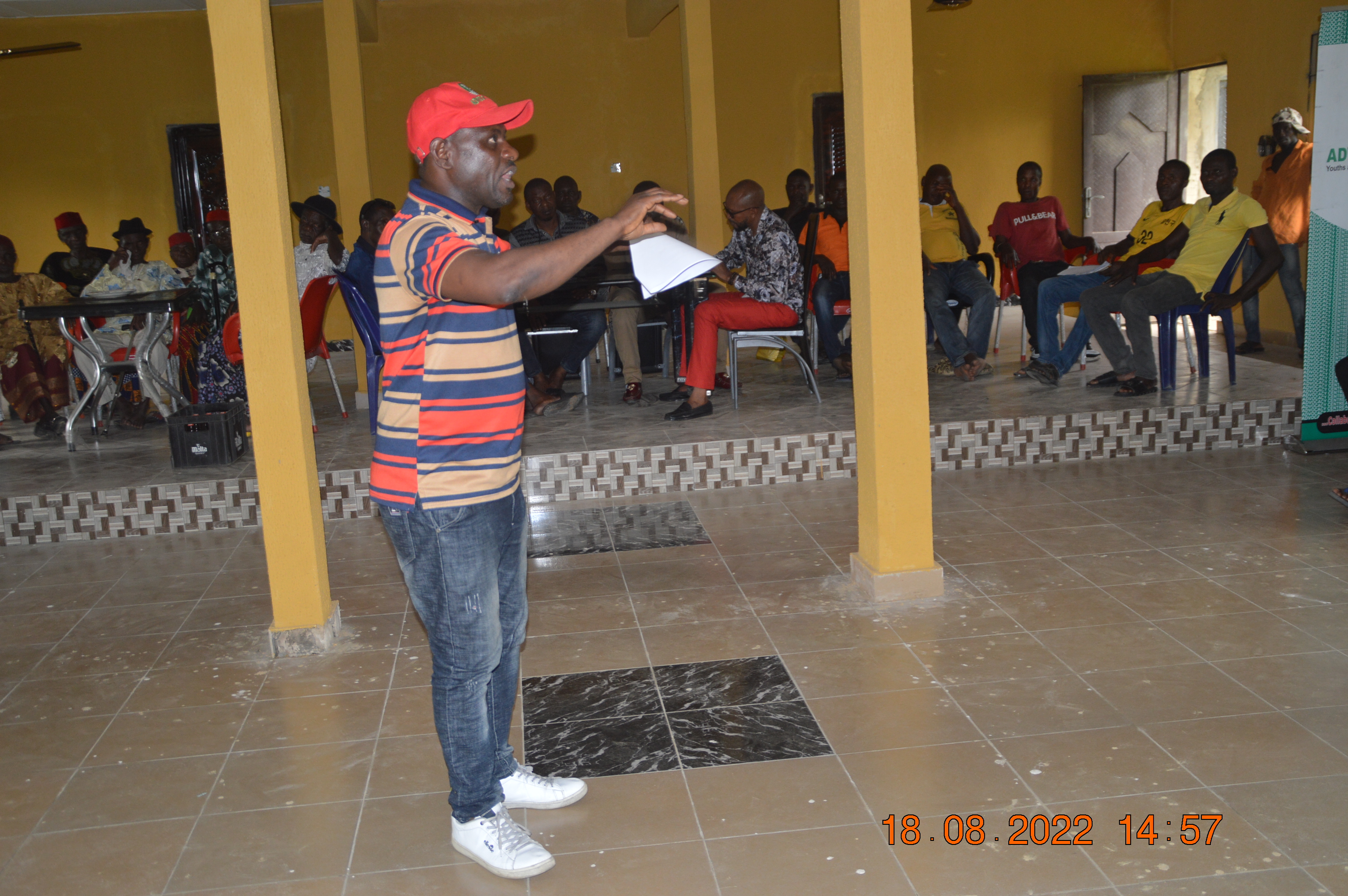 The Executive Director of YEAC-Nigera, Fyneface Dumnamene sensitising and speaking at the town hall meeting

Speaking at the community sensitization town hall meeting, the Executive Director of YEAC-Nigeria, Fyneface Dumnamene Fyneface thanked the community on behalf of his team and partners for their hospitality. He explained to the community, “Who we are; what we are proposing; how it will work; what it will cost and what it will mean”. Speaking further Mr. Fyneface said the partners’ analysis of satellite data through submitted coordinates showed that the community has 262 structures that can be connected to the mini-grid if accepted for installation with the hope of powering-on by December 2022, all things being equal. 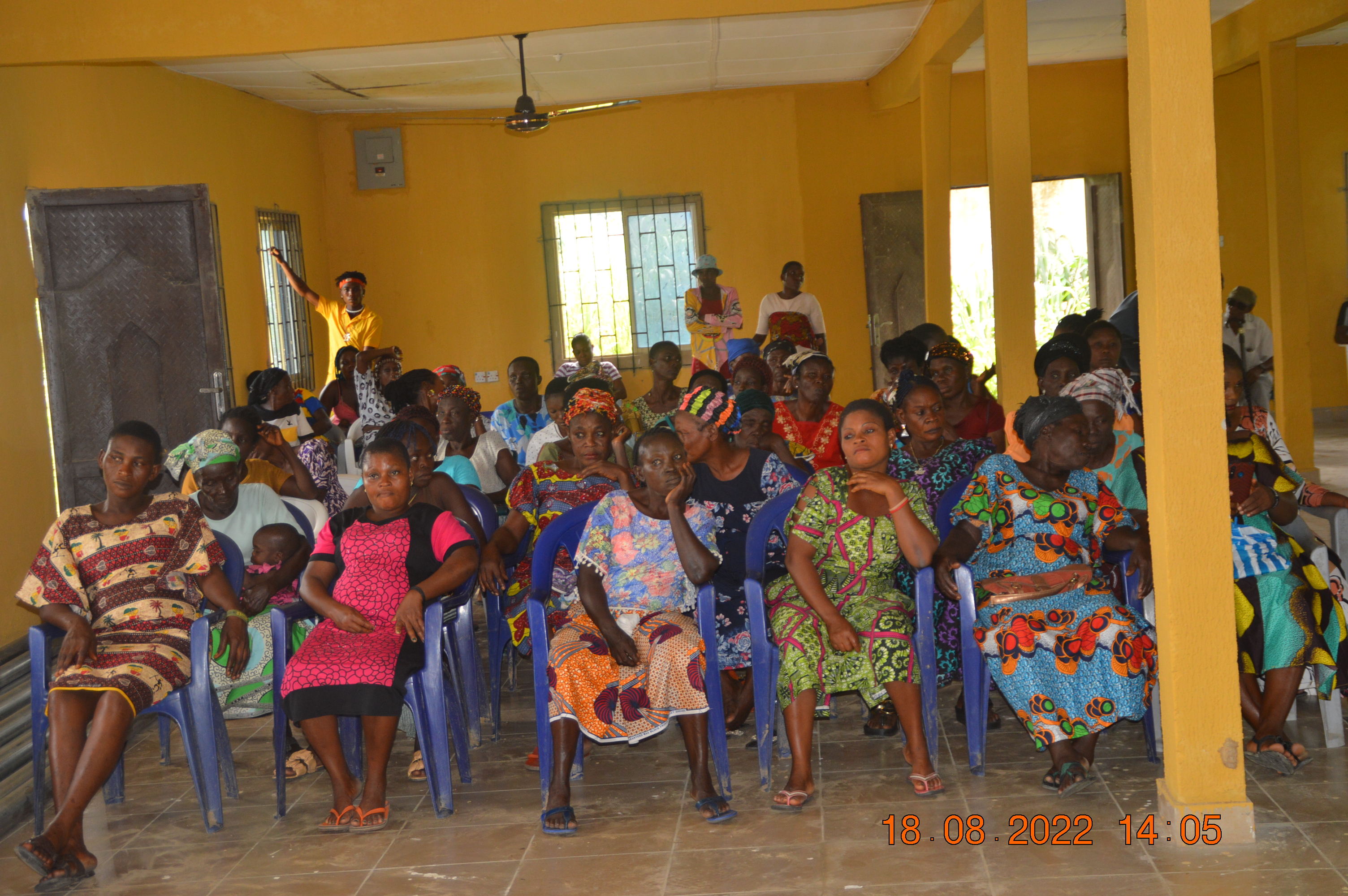 Cross sections of men and women at the event 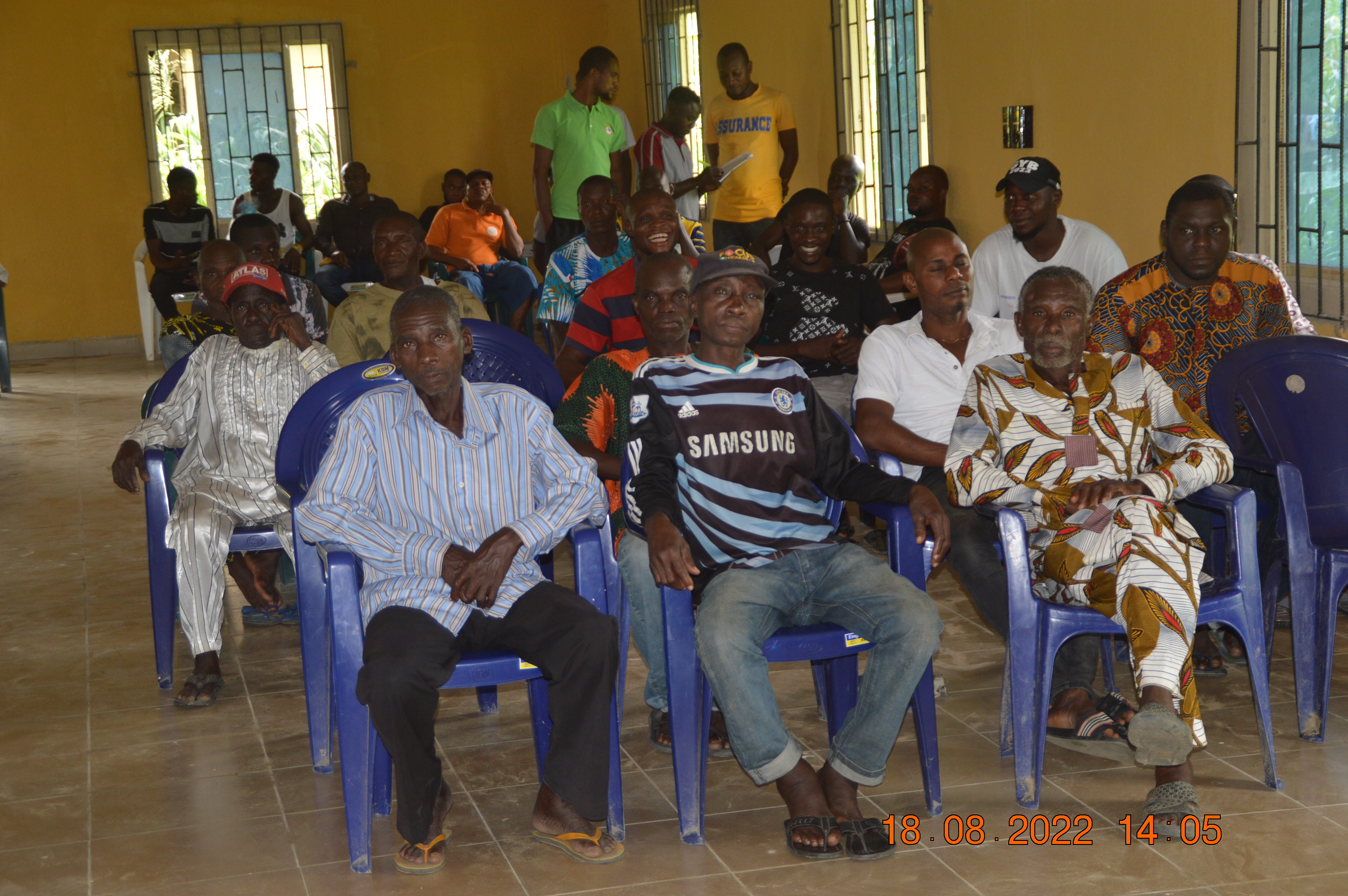 During the town hall meeting, Fyneface also informed the community members that community support would be needed to ensuring a smooth process of the project installation if it is accepted. Adding that such support would be needed through a five member “Energy Committee-EC” set up to interface and serve a bridge between Umuolu and Advocacy Centre. Mr. Fyneface told the community leadership that they should ensure that there is at least one woman among the 5-member energy committee for gender mainstreaming and social inclusion. He highlighted the roles of the EC to include communication with developer (YEAC), finding local agents/techs, LED changeover, education of energy customers, dispute resolutions and contacting diaspora (YEAC) for issues beyond their control that may arise in the community around the facility. Mr. Fyneface further listed the functions of the EC to include providing local agent & technical referrals.

Responding, Mr. Sunny Okoro asked the Executive Director of YEAC how the land acquisition cost would be paid to the community. Responding, Mr. Fyneface said to the best of his knowledge, the community’s offer of the landed property as a mini-grid site would be paid for through the calculation of the said amount and plunging same back into energy purchase for all connected households to have free electricity on the day that the facility lights-on till the units are exhausted before they start buying units into their meters. 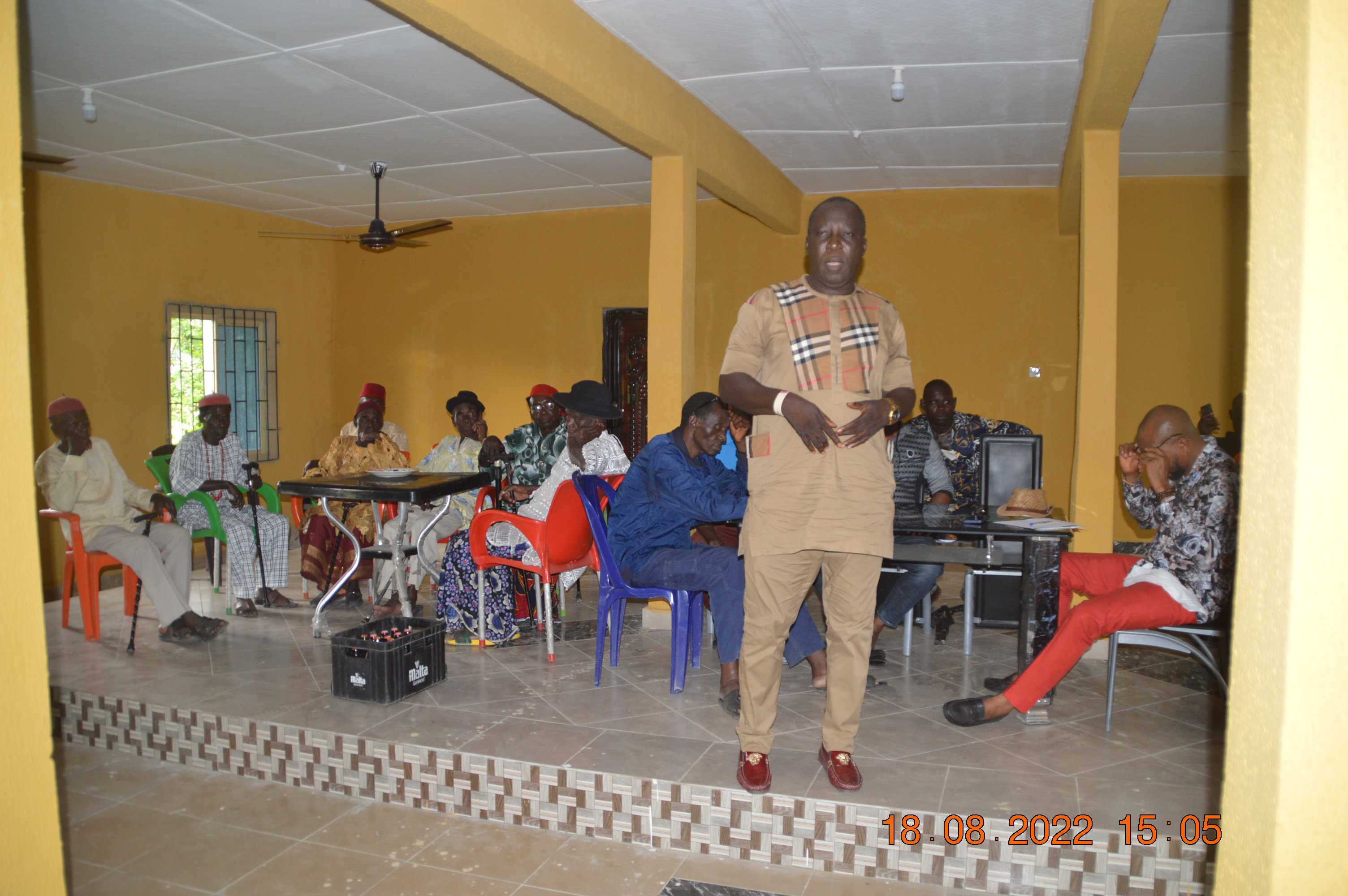 Responding on behalf of the community, Chief Mike Opute said from the body language and expressions of community members here present and those who could not travel down has it that the community accepts the project to be sited in the community. Also speaking, the youth president stood up and asked crowd in the hall whether do they accept the project as the community has spoken through one of their chief and they all chorused “YES”. 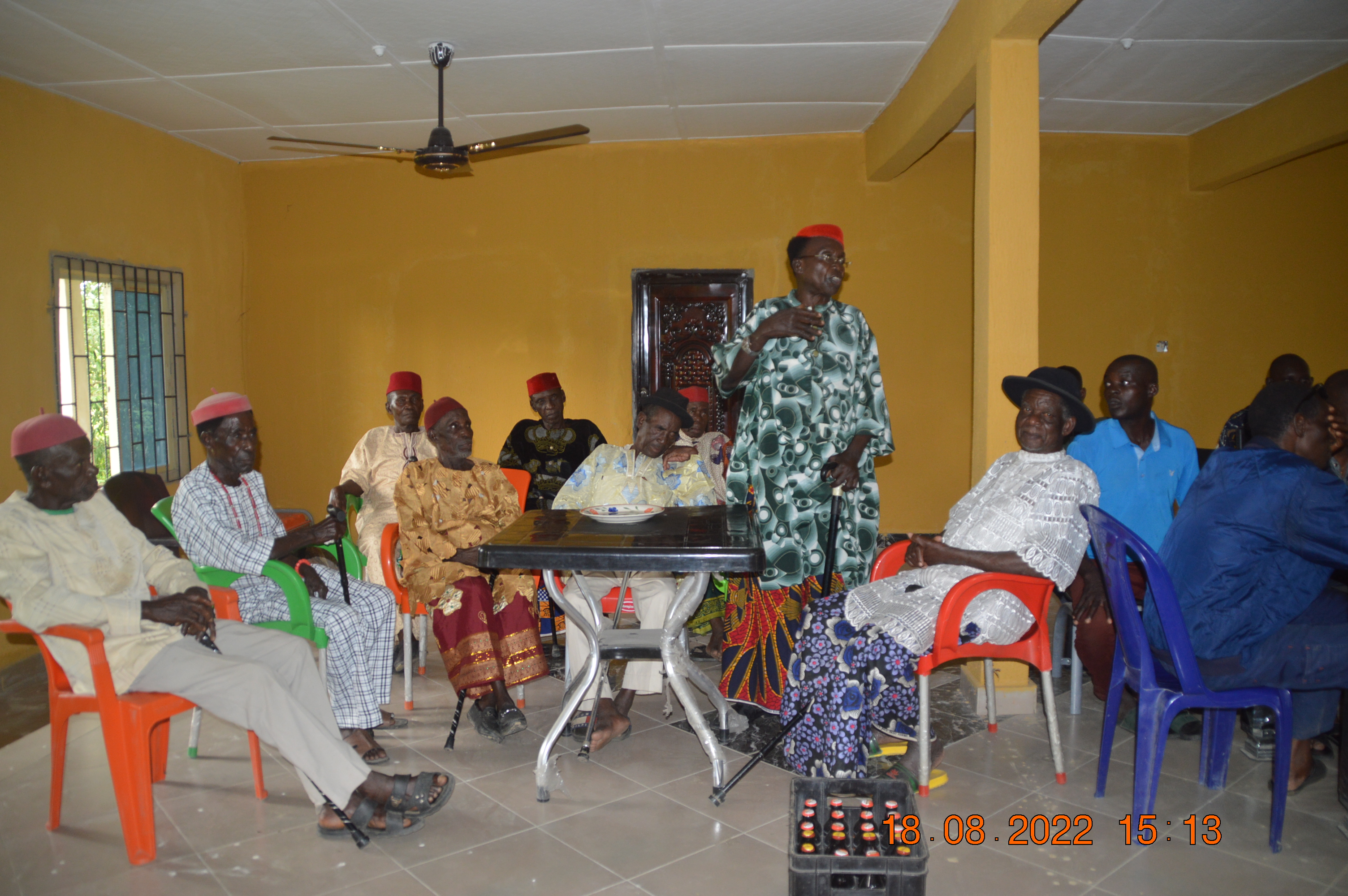 A cross section of Chiefs and Elders at the event with Chief Mike Okoro speaking on the decision of the community, accepting the project.

The President General, Engr. Tabowei Isicheli received the legal documents from the Executive Director of YEAC, Fyneface Dumnamene on behalf of the community for further review and signing in line with their verbal acceptance for the project to be sited in the community. 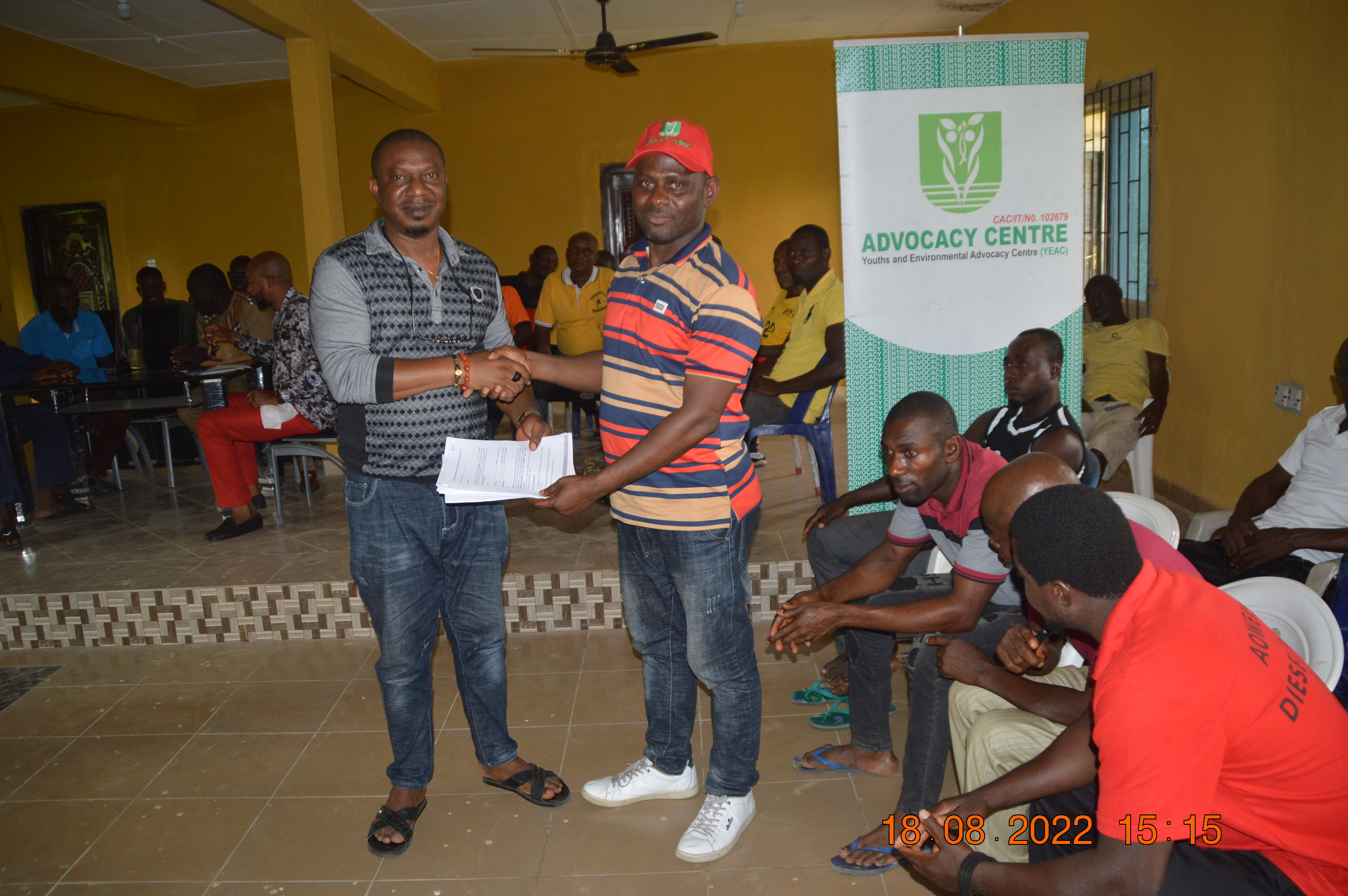 The Advocacy Centre’s team led by the Executive Director later paid a courtesy visit on the eldest man and paramount ruler of the community, High Chief Godwin Orgu to intimate him about the project and he accepted for it to be sited in the community while praising YEAC-Nigeria and the United Kingdom for considering the community for the project. 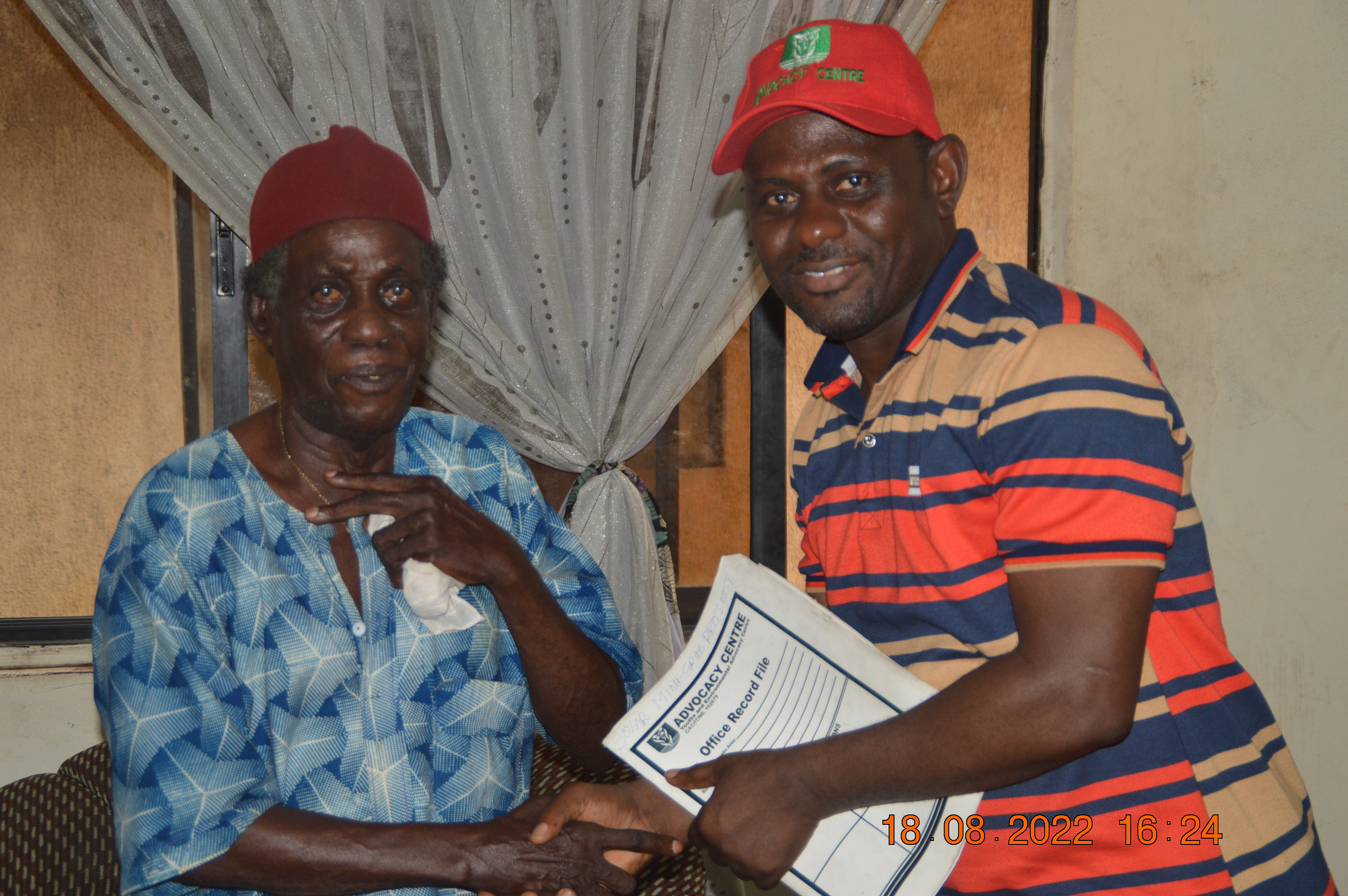 The paramount ruler assured the team of the community’s support and protection of the facility to be sited which he said will boost the community’s economic activities and empowers the youth including women. High Chief Godwin said the community has not had electricity before as all efforts by both the State Government under former Governor James Ibori and the Niger Delta Development Commission (NDDC) to connect the community to the national grid did not materialized. 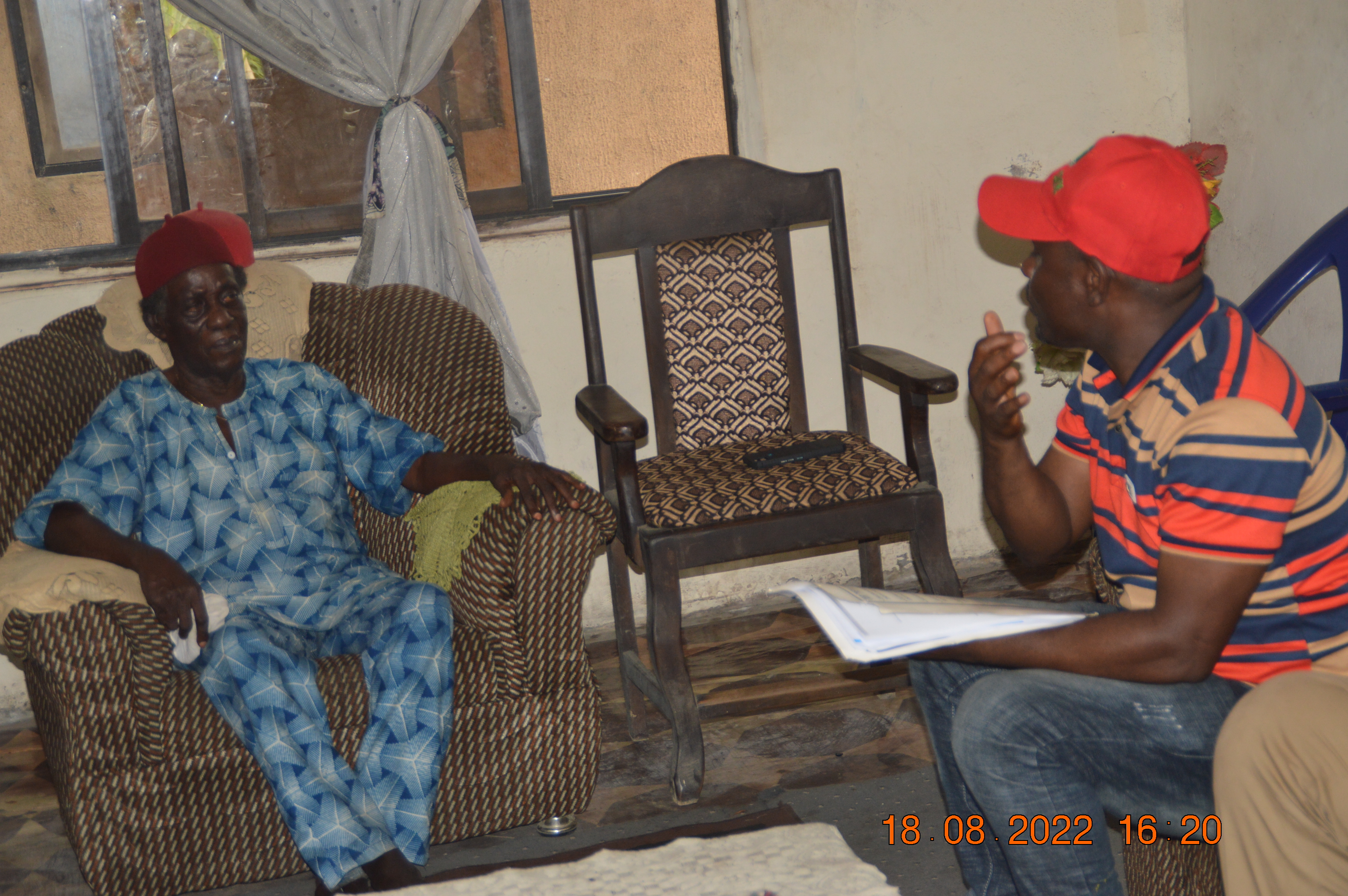 The Executive Director of YEAC-Nigeria briefing and explaining details of the Solar Mini Off-Grid Electricity Project to the Paramount Ruler, High Chief Godwin Orgu in his Palace. High Chief Godwin was represented at the town hall meeting as he is not strong enough to walk to the community town hall, venue of the event and sit for participation

From the attendance register, 248 members of Umuoru community including the leadership, youths, men, women groups, the physically challenged and persons with disabilities (PWDs) participated in the town hall meeting. 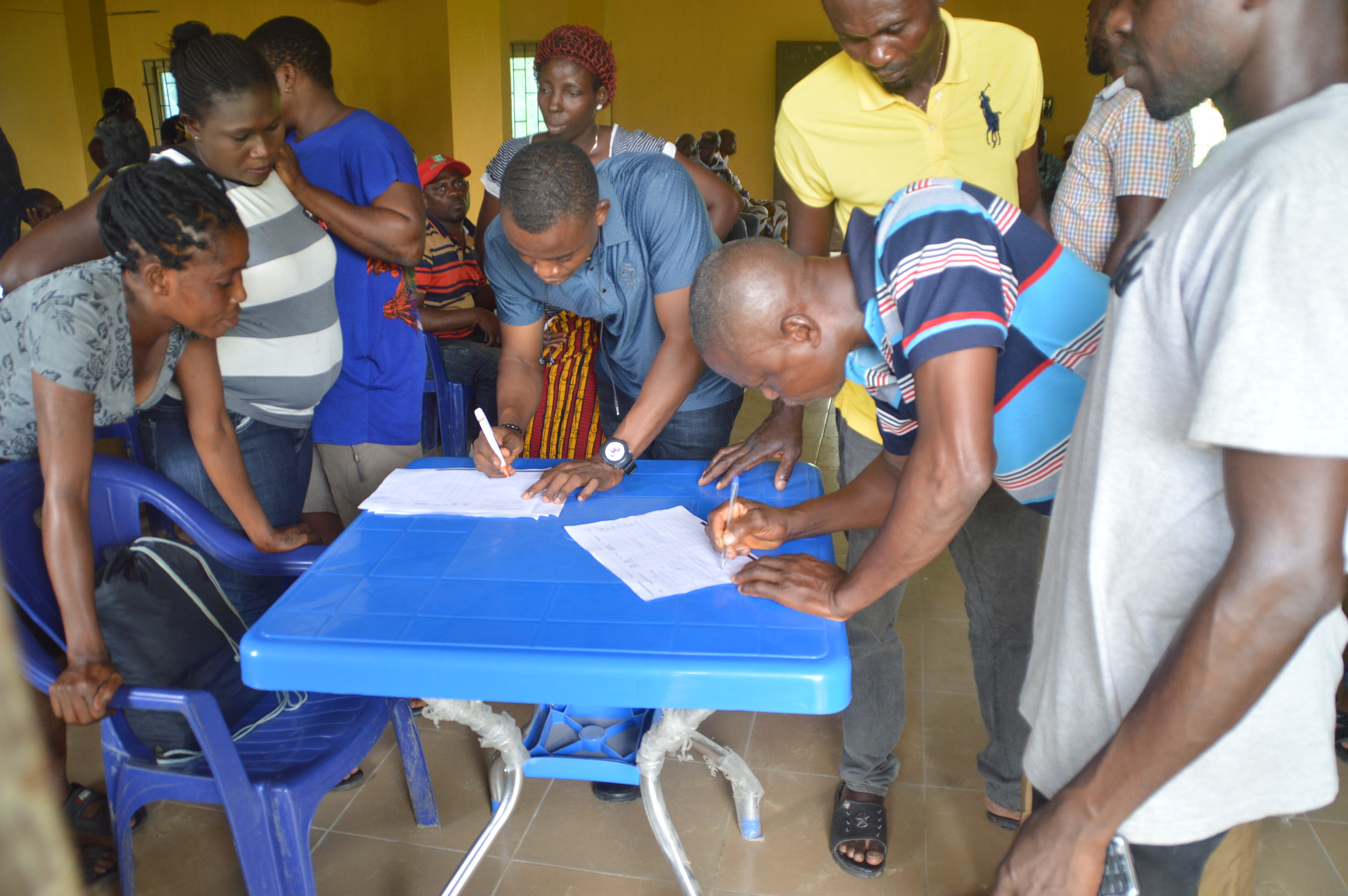 It was organized by YEAC-Nigeria to sensitize the community on Just Energy Transition (JET), Clean and Renewable Energy including Solar Power following YEAC and Partner’s approval for the installation of Solar Mini Off-Grid Electricity Project in the community as part of measures against fossil fuel extraction, crude oil theft, artisanal refining, pollution and usage of illegally refined petroleum products in households across the Niger Delta and Advocacy Centre’s contribution to the fight against climate change among others. 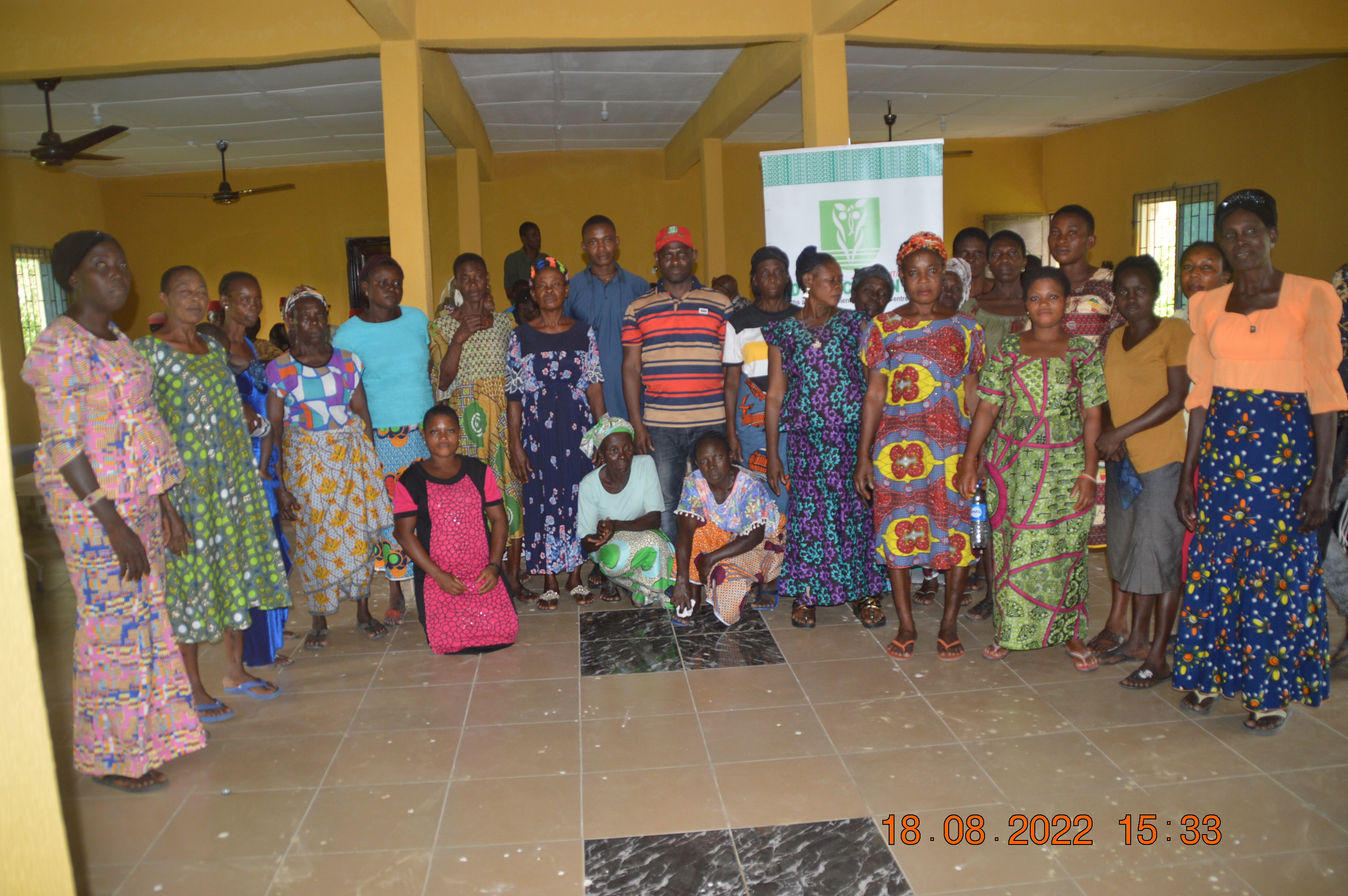 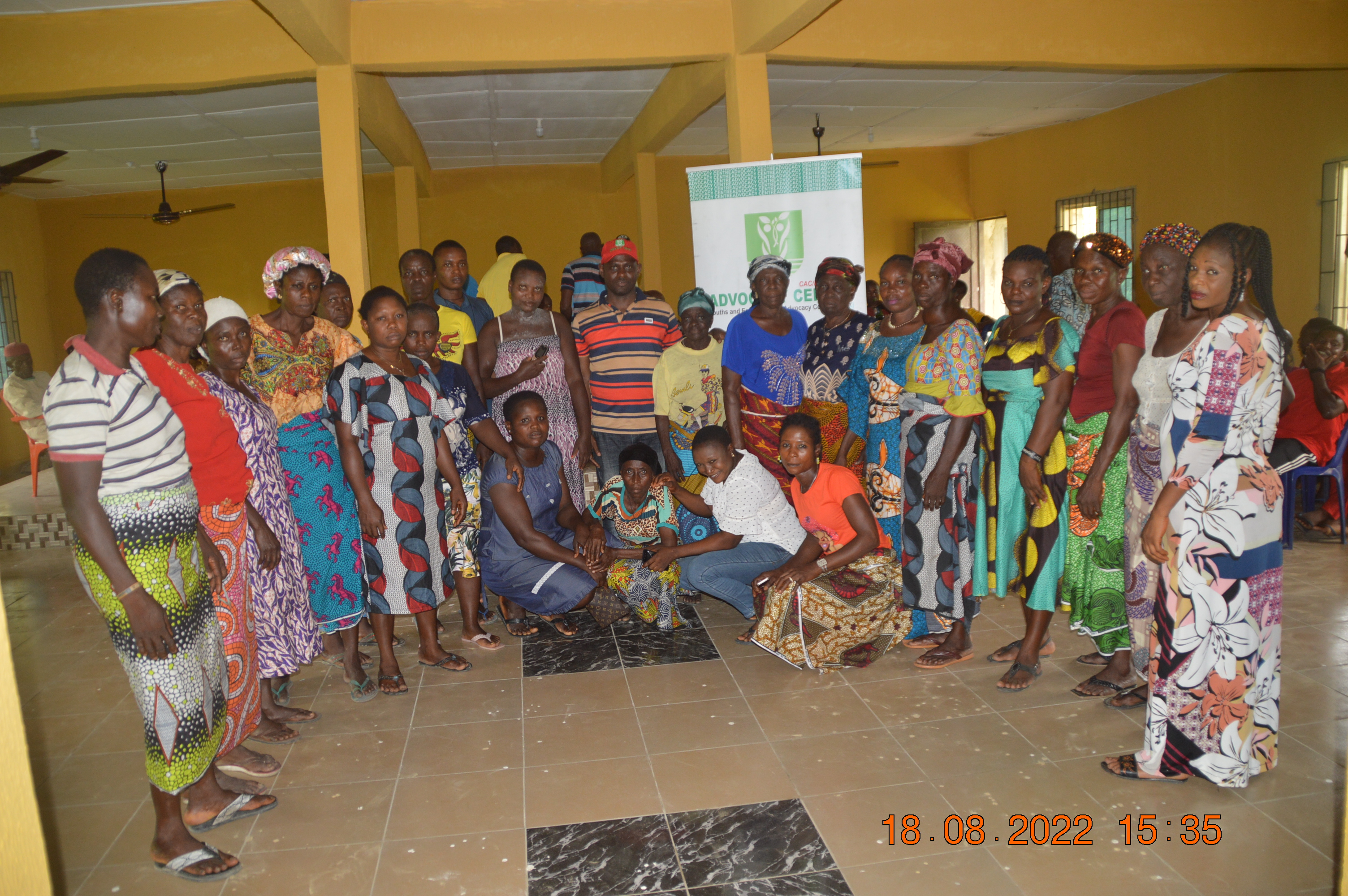 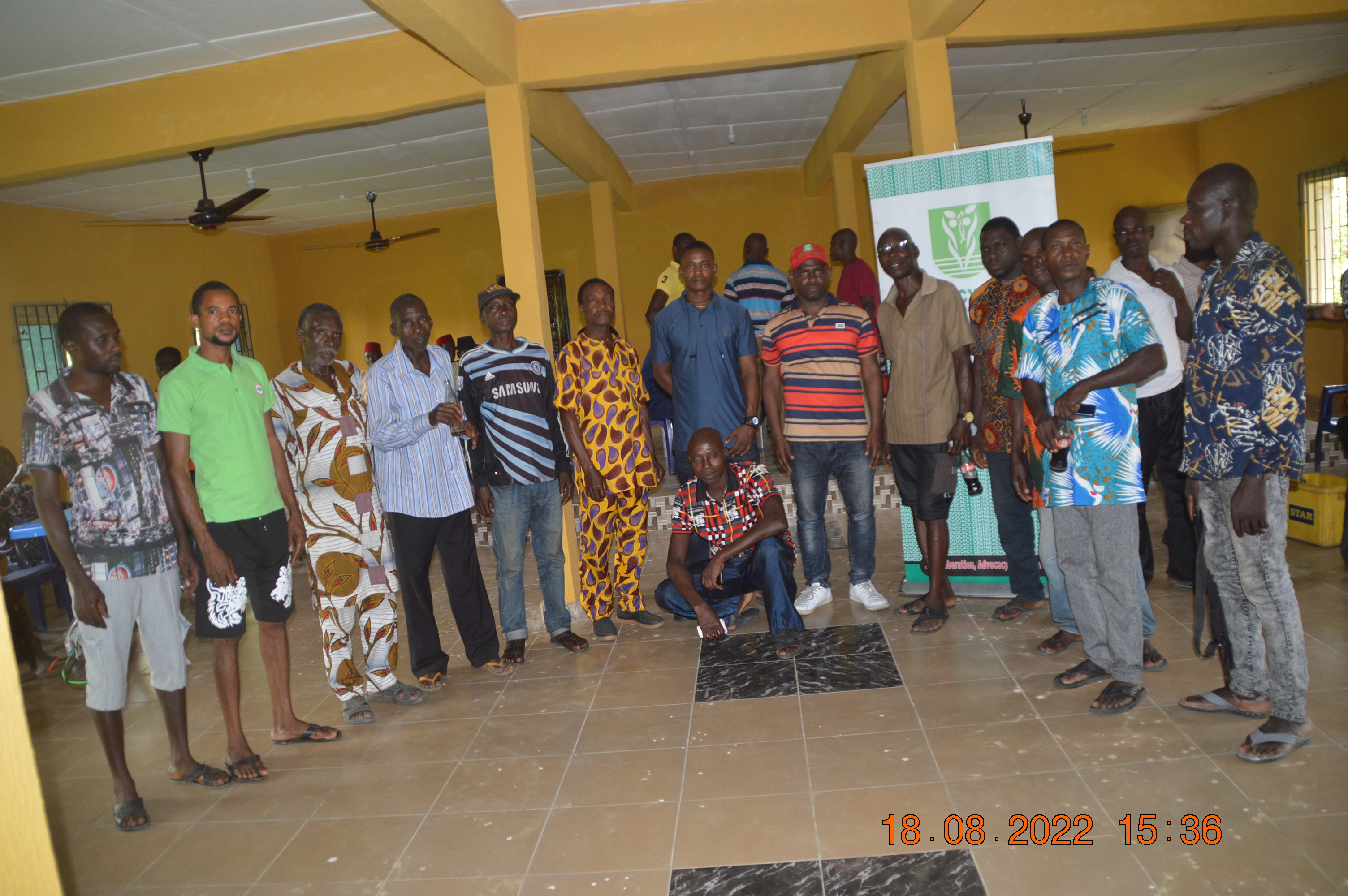 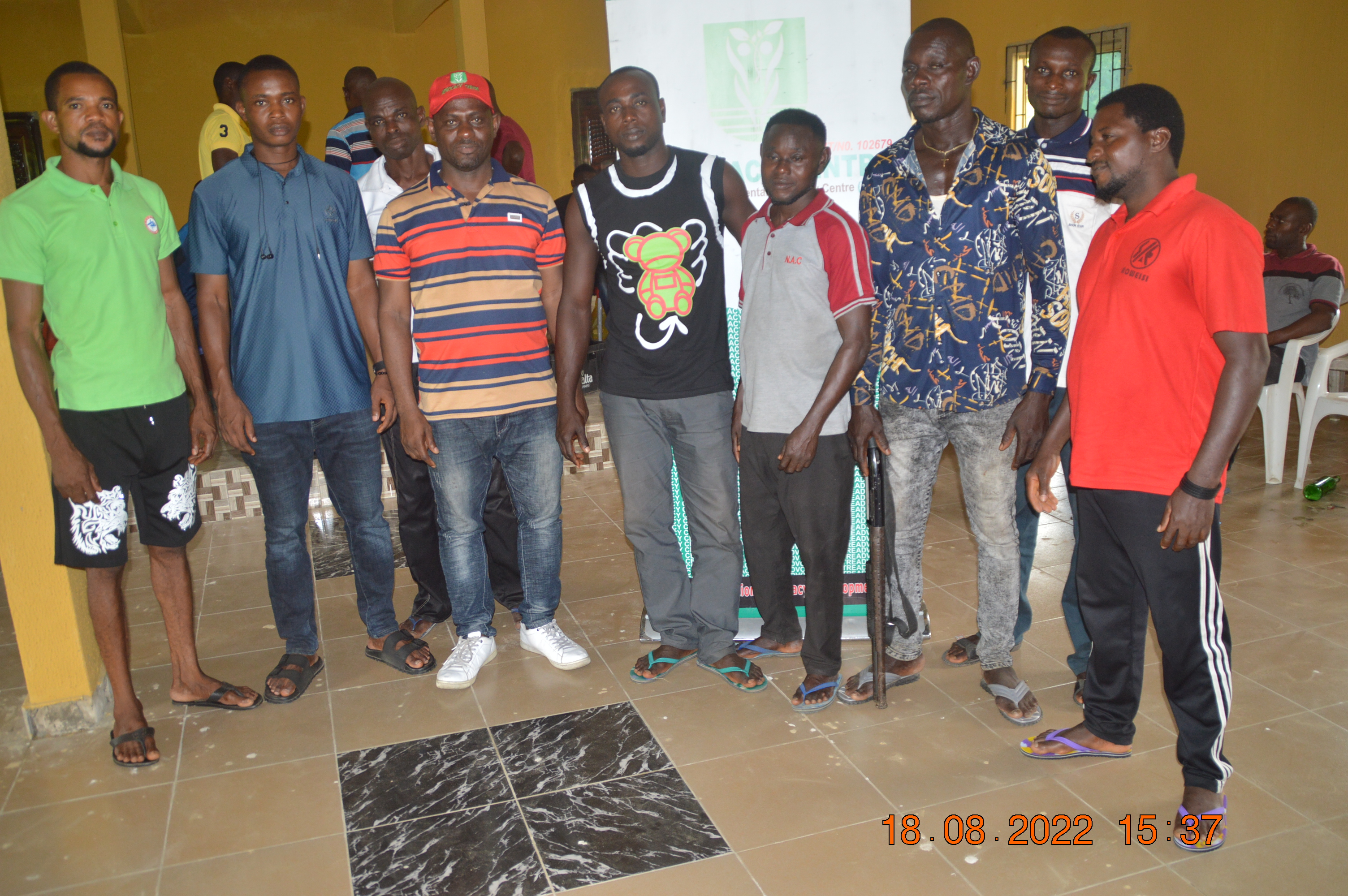 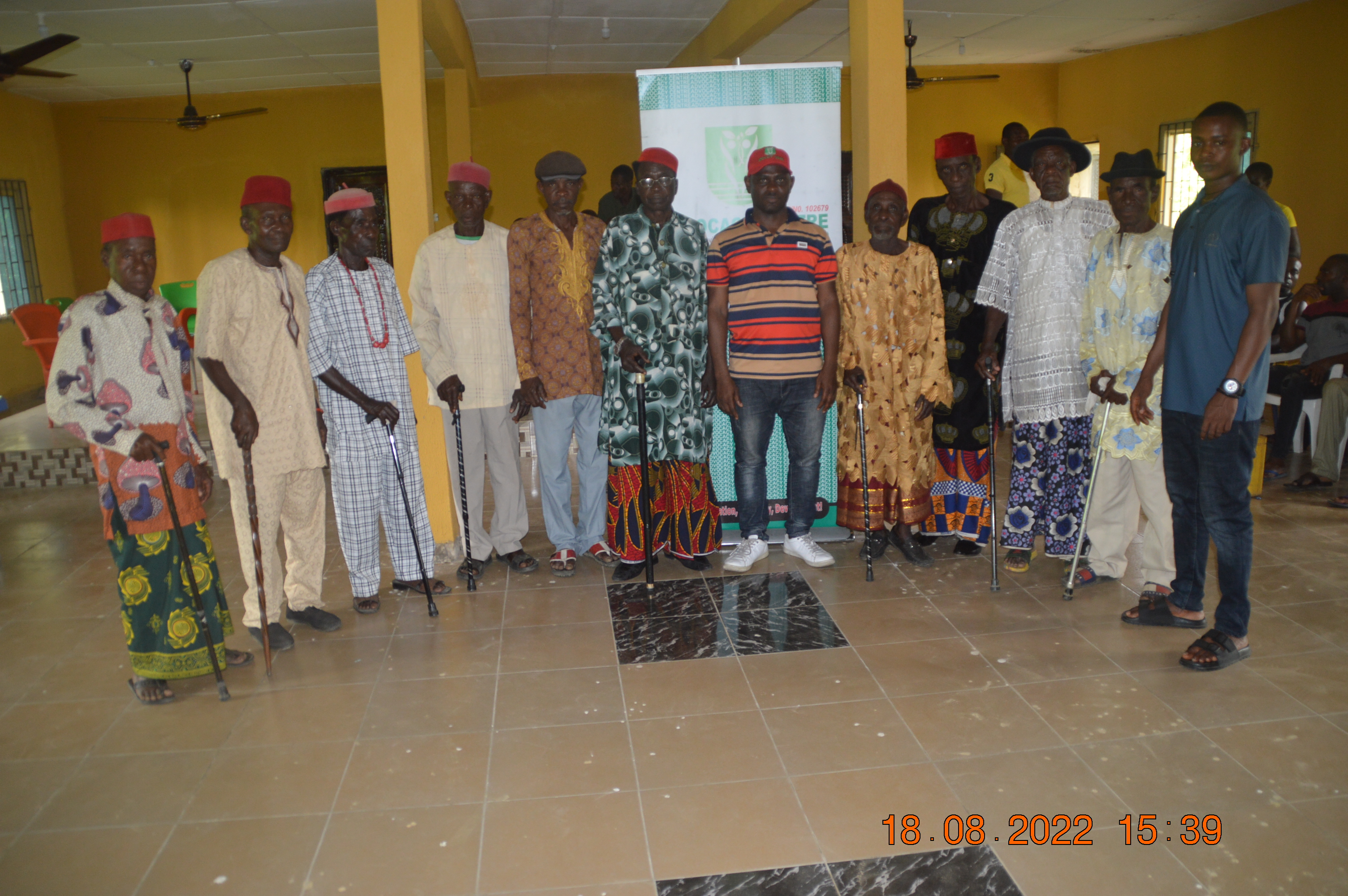 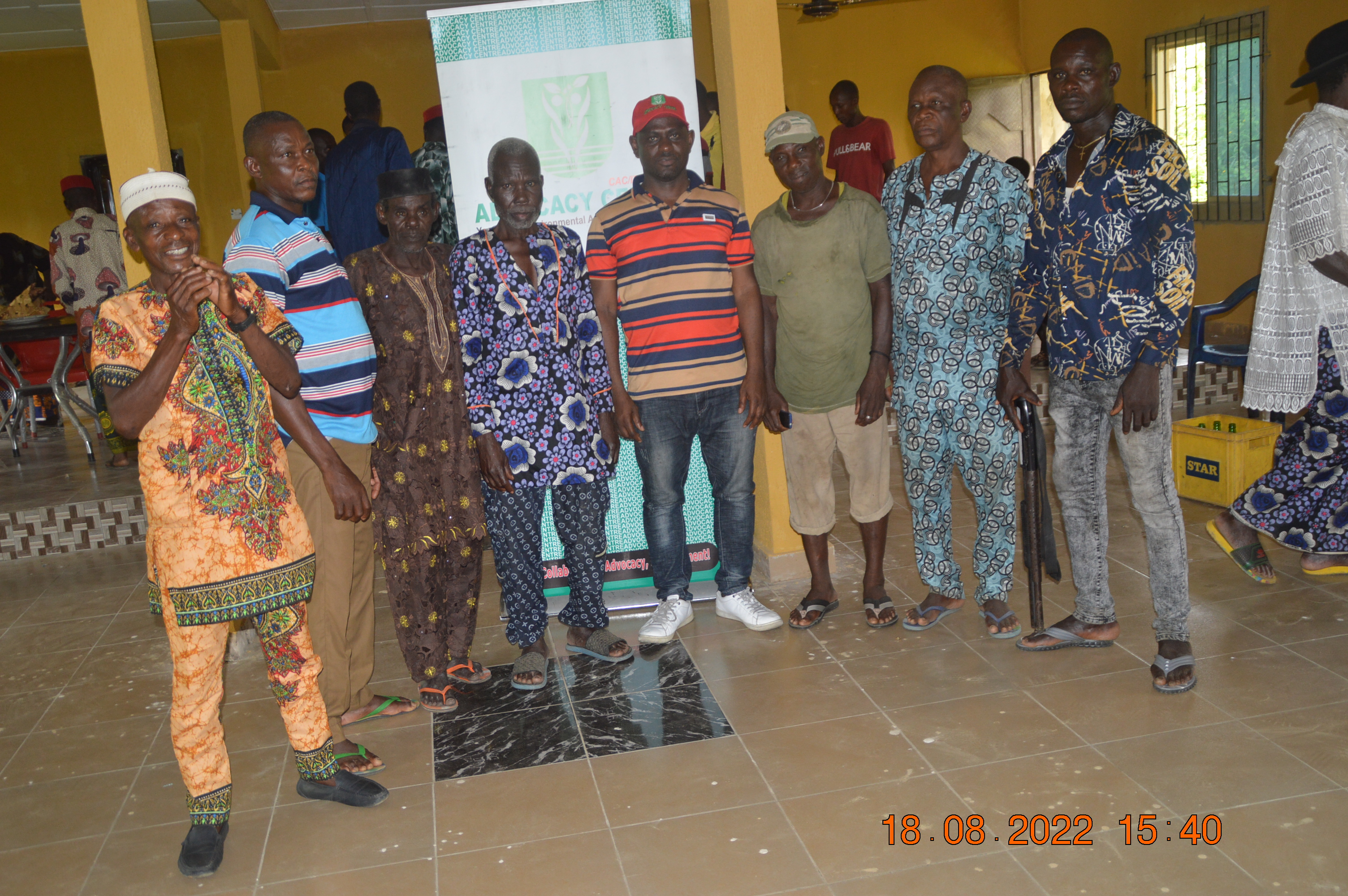 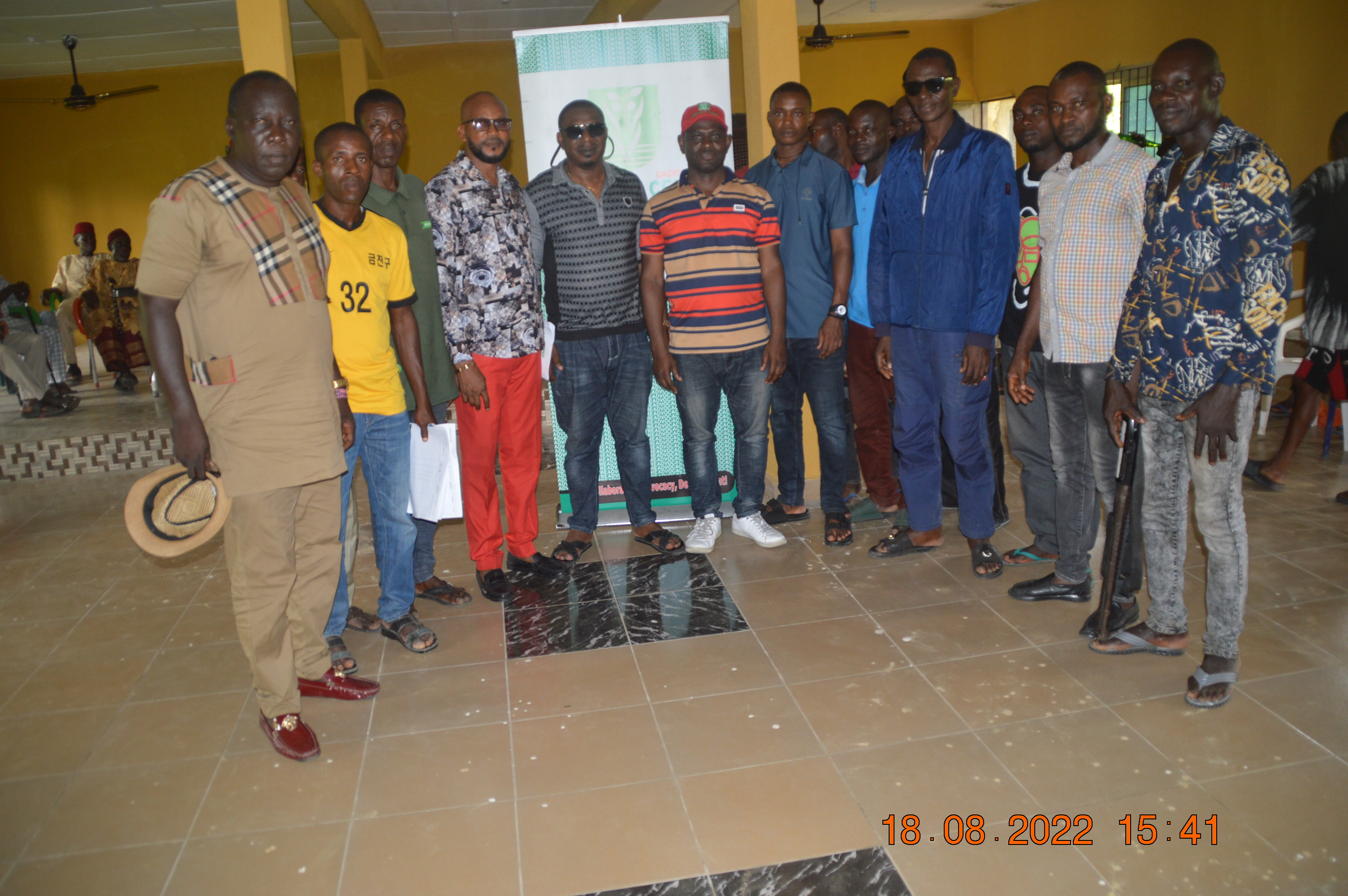 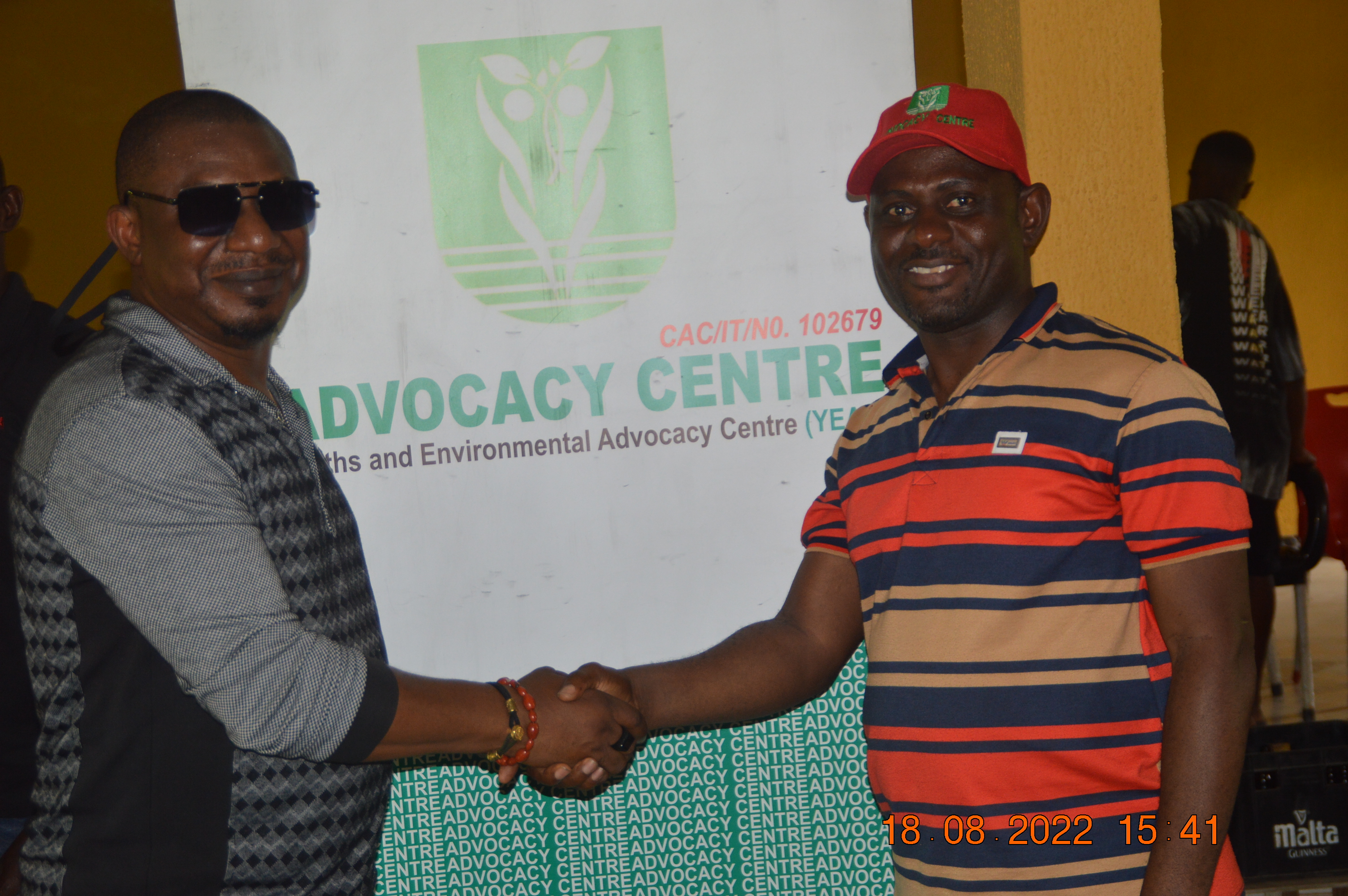 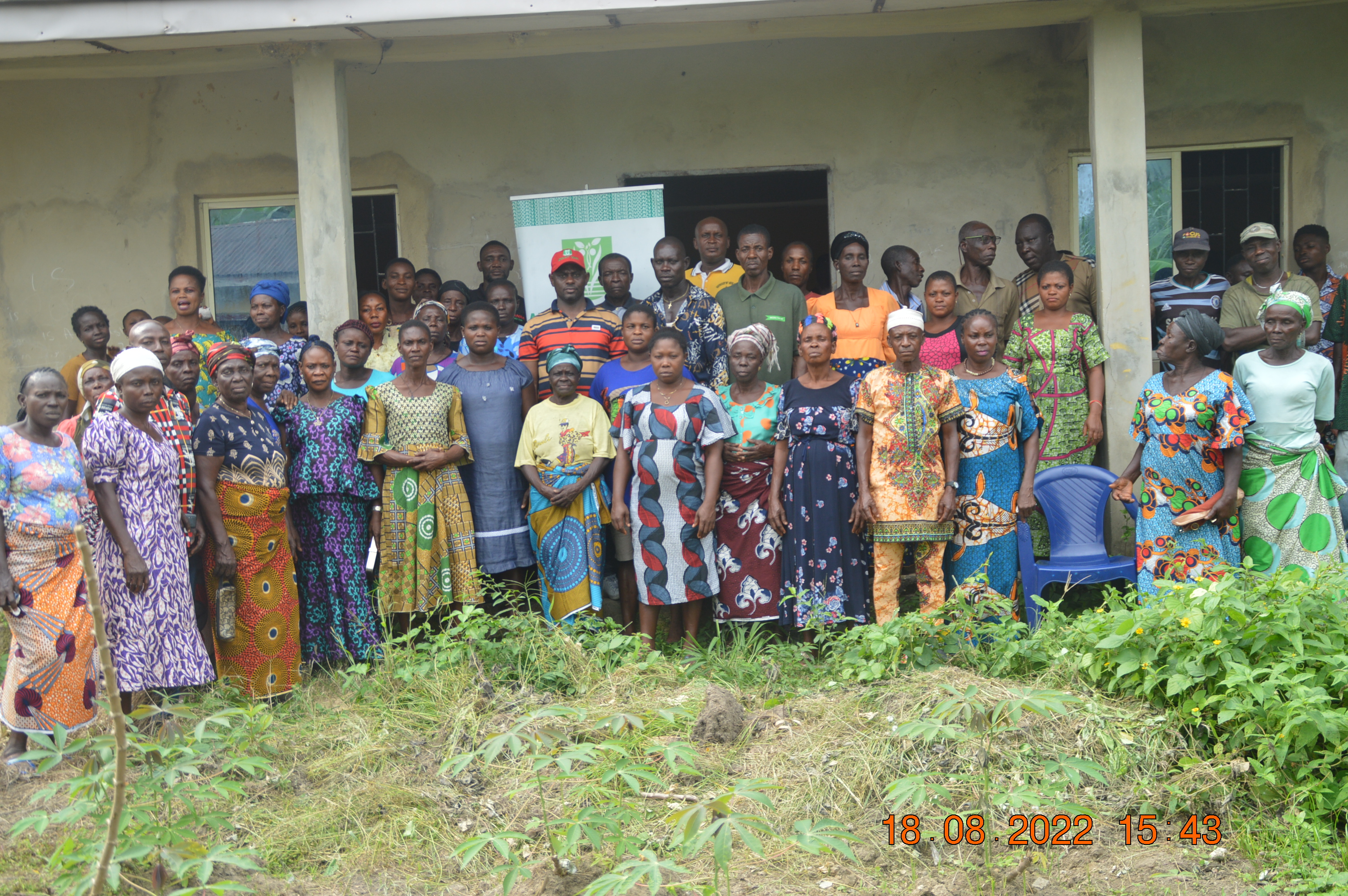 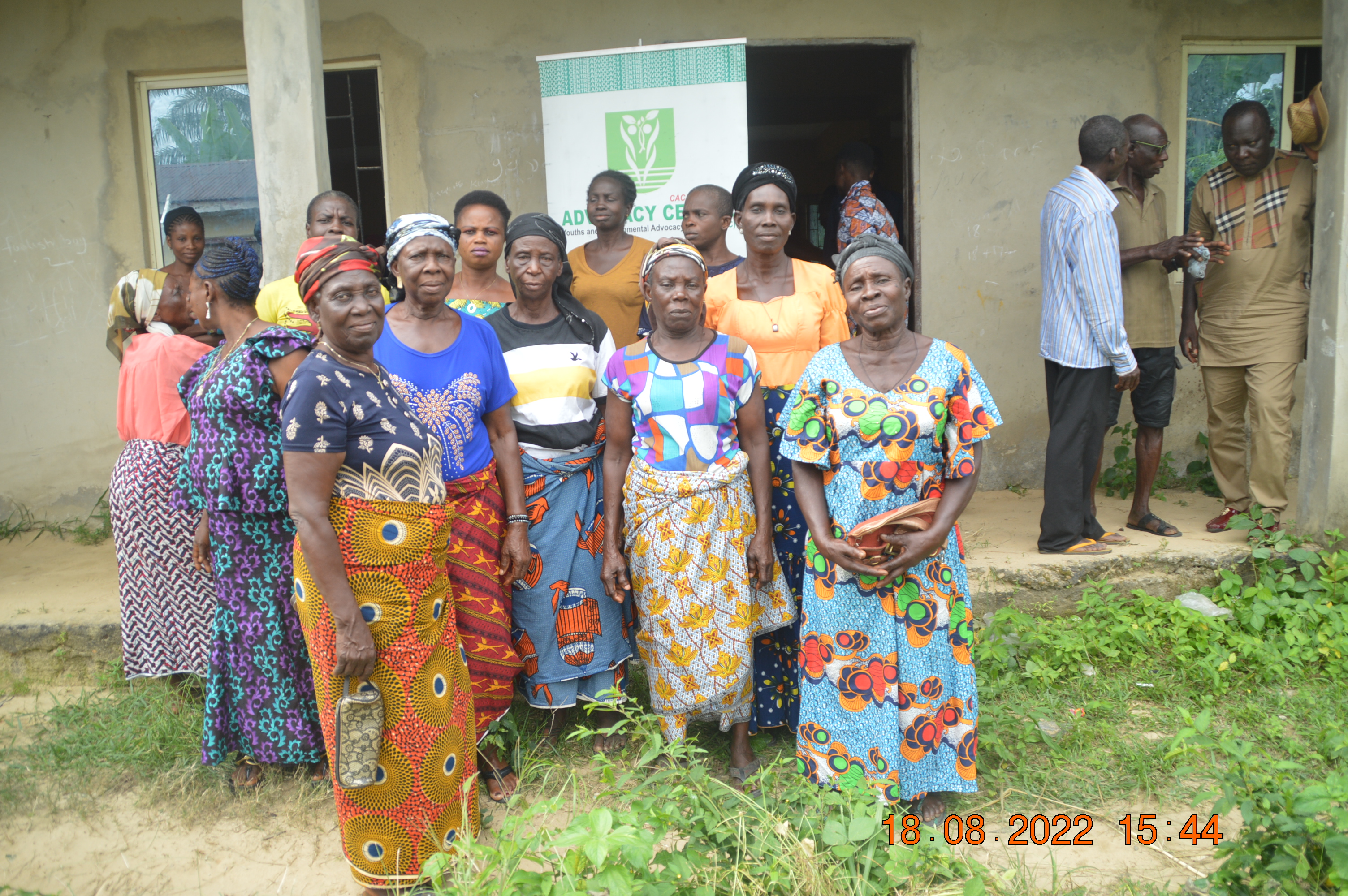 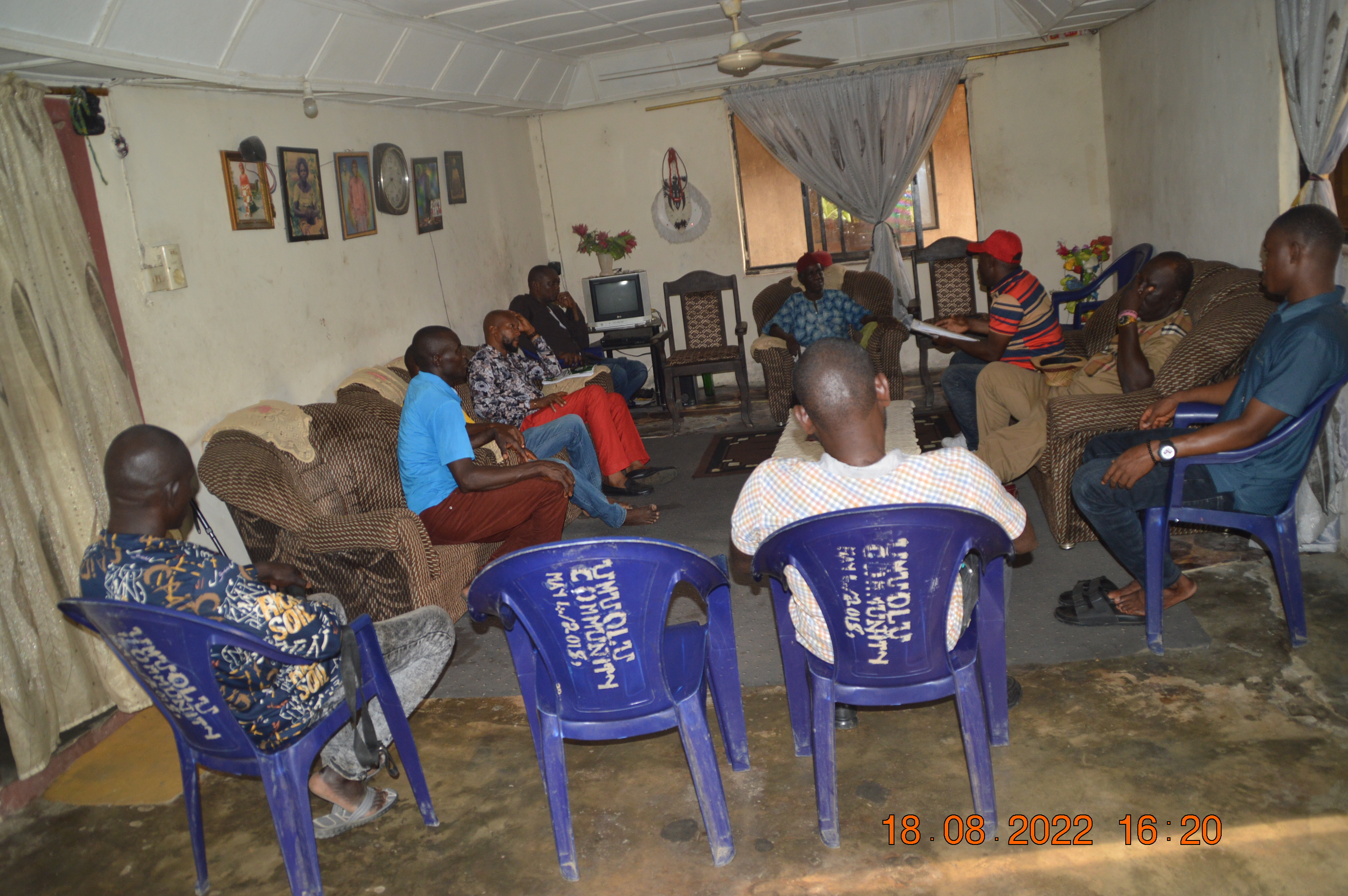 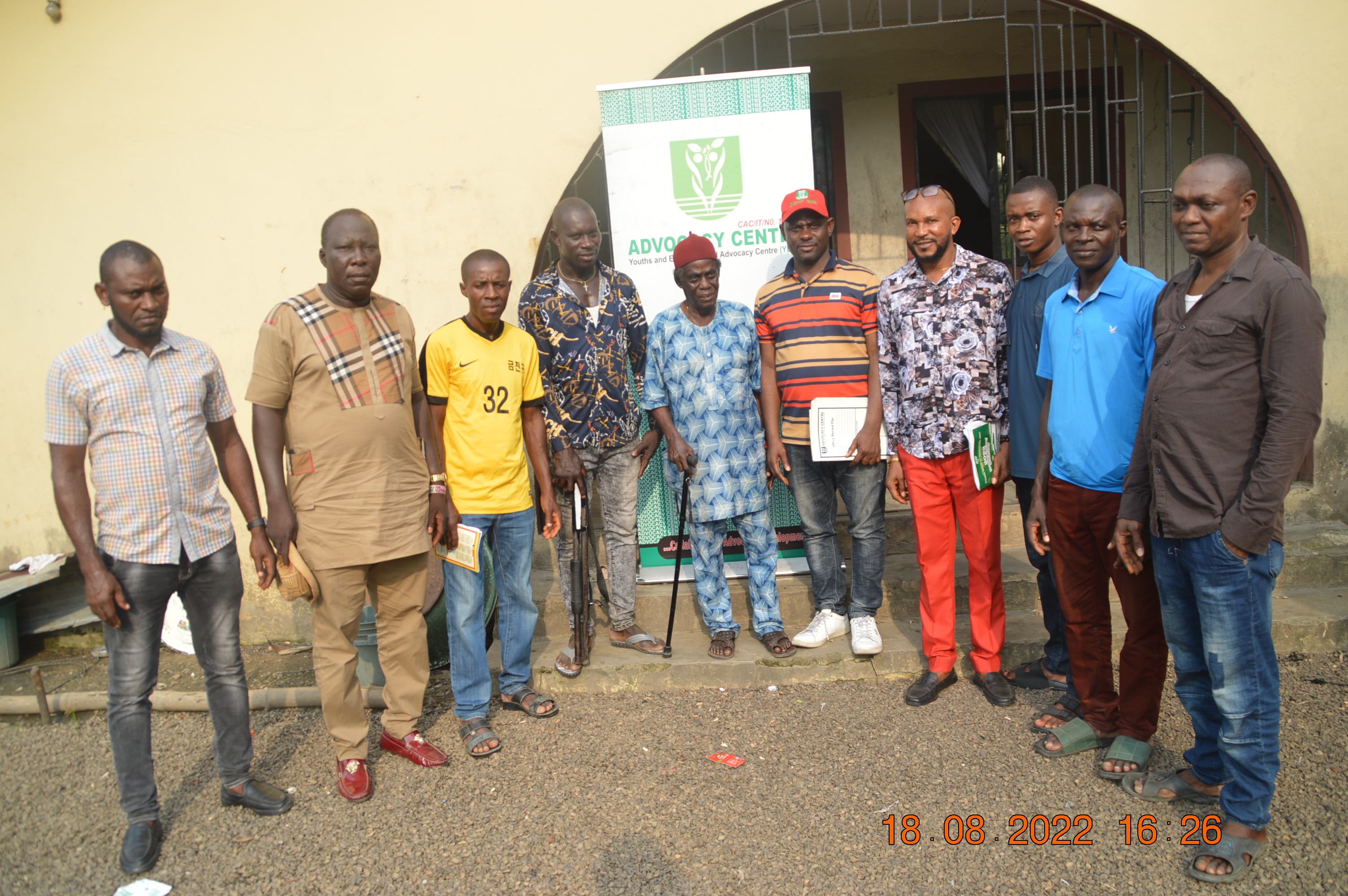