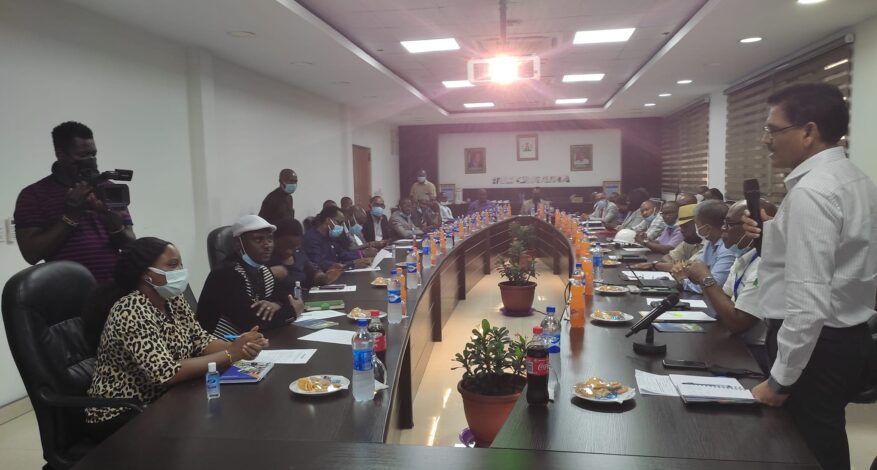 Youths and Environmental Advocacy Centre (YEAC) as one of the leading and frontline environmental, human rights and soot campaigners in the Niger Delta was on Thursday, March 3, 2022 invited by the management of Indorama Eleme Petrochemicals Ltd on a facility tour. Advocacy Centre was represented at the tour by its Executive Director, Fyneface Dumnamene Fyneface. 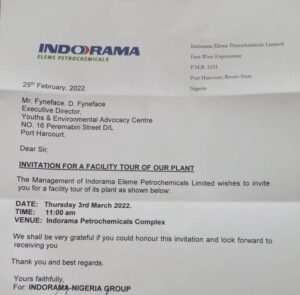 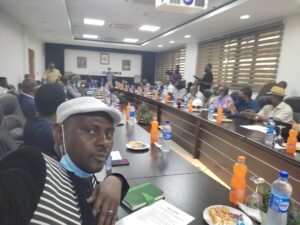 The objective of the facility tour include an assessment and determination of their environmental compliance especially levels of emissions and that they do not contribute to environmental pollution.

The tour commenced with the arrival of the guests by 11AM at the Laboratory Building and reception at the company’s Boardroom. At the Boardroom, opening prayers was taken by a staff of the company’s environmental department. Mrs Toyin Olasinde. This was followed by the introduction of the company’s staff by Dr. Jossy Nkwocha, head of Corporate Communications and then participants introduced themselves, one after the other. The safety briefing was taken by Indorama’s staff from the safety department, Mr. Pradeep Pawar and Bashir Mahammed. The facility tourists were then formally welcomed in a speech by Mr. A.K. Sharma, head of quality assurance and quality control (QAQC) who represented the company’s Managing Director. The high point of the meeting at the Boardroom was a long PowerPoint Presentation of Indorama’s Environmental Management System (EMS) by the Head of Environment, Dr. M.K. Jain. Few comments and interactions were taken by Dr. Jossy Nkwocha with a promise that on return from the facility tour, questions would be entertained and comments made.

FACILITY TOUR: The facilities toured include Olefins, Power Plants, Train 1 Control Room and Product Display Room. The facility tourists were conveyed in two coaster buses to these facilities. From the main gain of the company to the Lab Building where the Boardroom used for the reception is, you could see beautiful, well-greened and properly maintained environment free of wastes. Driving from the Boardroom building, you could see gardens and fine environment, noiseless and smell-less. Moving into the facilities, we were first shown around the Gas Turbines that provide electricity for the company and plants. The Gas Turbines are Six (6) and provide constant electricity for company and all the plants. We asked why so many of them and power is not distributed to the host communities and they said it is not something to discussed exhaustively as it was not the focus of the tour. Argument ensured between the tour guard who was explaining things and the facility tourists on the “white smoke’ that would coming out of some of the plants where they were ‘gas’ or ‘steam’ as the tour guard said. It was settled that the ‘white vapour’ was mere ‘steam’ like those that come out of a kettle when boiling water at home. We drove to the Olefins plant with capacity of producing 360 KT of Ethylene and 120 KT of Propylene per annum and the state-of-the-art facility operates noiselessly with clean and well-kept green field and environment around it. The Urea (fertilizer) facility is massive and said to be the world’s largest single train Urea plant completed in 2016. The environment around the facility is also very neat and free of pollution and effluent expected around such facility operating at low-noise level and without any seen acceptable level of pollution or emission. We tour proceeded to the Control room where you cannot enter with shoes but bear-footed due dust sensitivity and nature of the plant as we were told.

The control room has massive television screens on the walls and on the tables all around the large fully-airconditioned room. The screens are displaying real-time, all the operations going on in the massive facilities we saw outside with some workers pressing some buttons and controlling production process with CCTV cameras displaying other aspects of the plant on different screens. The computer control rooms are manned by Nigerians, one of which is from Bayelsa State and the other Igbo with White men working with them. The two Nigerians explained to use how the Urea is produced through the systems and clicked the computers to display on the large screens, the movement of materials and chemicals from one point of production process to the other till fished and packaged. The place is also without any environment pollution or emission issues that are detrimental to humans or environment from our own observation and our different levels of knowledge. The tour concluded at this point with group photographs and return to the Lab Building where the Product Display Room is located. We saw all the products of the company on display in this room. Opportunity was no longer giving for people to ask question and comment as earlier promised when we return from the tour and many were ready to close and go and it was so. Photographs were not allowed in the facility except by the company’s official camera team which they promised to share with us and we will share with you in this report when we receive them.

ADVOCACY CENTRE’S SUBMISSION AND POSITION ON INODRAMA’S FACILITY AND ENVIRONMENTAL COMPLIANCE AFTER THE TOUR.

1. The company’s environment is generally clean, neat, green and plants operating at low-levels of noise

2. The company has what can be described as one of the best environmental team and theory in place as demonstrated on the presentation by the Head of Environment, Dr. Jain.

3. The company also thrives to ensuring that its environmental practices is the overall best but more needs to be done and they promised improvement.

4. The facility tourists were not taken by the company to where they discharge their effluent. They denied discharging same into water bodies in the area and we cannot confirm their environmental practices in relation to the discharge and disposal of the company wastes. This means that those who may be invited on such tour in the future should demand to be shown how the waste and effluent disposal system of the company.

6. Again, some studies have shown that Gas Flaring which has been outlawed in Nigeria by Law contributes to environmental pollution and even Soot ravaging Port Harcourt and its environs. So, if the Executive Director of YEAC saw and confirmed gas flaring point in the company, the Indorama Eleme Petrochemicals Ltd is contributing to Soot, climate change, air and environmental pollution like other such companies flaring gas in the Niger Delta and Nigeria.

7. Indorama denies that the Ammonia gas and chemical with bad odour that smells around the facility’s host communities and surrounding areas like Life Camp, Akpajo, Aleto, etc. is coming from their facility. Of a truth, rights inside the facility and area toured, the smell was not felt. The smell could be felt from the entrance into the company on the East West road upto a point inside the company and it stopped and you can only smell it again when you return to a distance from the facility. Although Indorama said the smell is not coming from their facility but other companies around (but no such other companies exist around the area) and refuses to name the ‘other companies around’, ADVOCACY CENTRE holds Indorama accountable and responsible for the Ammonia gas smell around the company and urges it to commission a study into it to investigate the air pollution and air quality beyond what they company had already done as presented by Dr. Jain and also to determine the source of the poor and poisonous around the company since they said it is coming from their facility.

8. YEAC also recommends that Indorama does more to trap the gas being emitted and put in place other measures that would improve the company’s environmental practices beyond the good works already being done as presented the the PowerPoint by Dr. Jain