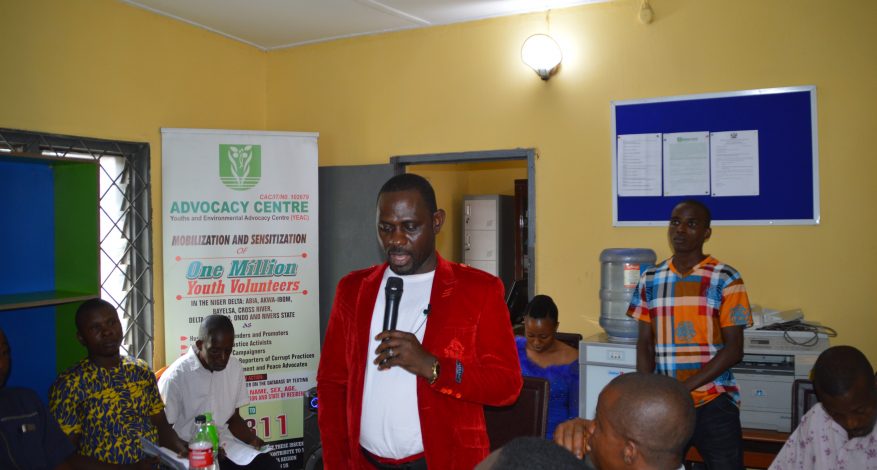 ADVOCACY CENTRE’S DOCTRINE OF PACORDI AND DEMAND FOR ESTABLISHMENT

Below is Youths and Environmental Advocacy Centre’s idea and believe on Presidential Artisanal Crude Oil Refining Development Initiative (PACORDI) as propounded by its Executive Director, Fyneface Dumnamene Fyneface and published first about on his Facebook Page on July 27, 2020. The publicity about PACORDI continued on WISH, 96.5FM Port Harcourt in July same year and had continued on radios, television and newspapers across the country and the world since then. Below is the text of the Doctrine of PACORDI as presented at one of the trainings held in December 2020. At the end of the text below, you can download the PowerPoint Presentation at the said program comprising of both details of Presidential Artisanal Gold Mining Development Initiative (PAGMI) through which PACORDI is tailored.

As gold is found in communities in Kebbi, Kaduna, Zamfara, Niger, Osun States, etc so is crude oil found in Abia, Akwa-Ibom, Bayelsa, Imo, Ondo, Rivers State, etc. Like youths in the ‘Gold States’ got involved in illegal mining of the gold found under their soil, so do youths in the ‘Oil States’ also started illegally mining the oil found in their States.

Both activities (artisanal gold mining and artisanal crude oil mining) are illegal activities with great consequences on environment, health, revenue, etc. and if steps have been taken to legalize the one (illegal gold mining), steps should also be taken to legalize illegal oil mining in the Niger Delta because both activities are the same and hold the same potentials for country’s benefit. Recall that a 2020 report titled “Dirty Fuel” by Stakeholder Democracy Network (SDN) found out that petrol produced by artisanal refiners in the Niger Delta is cleaner than those imported into Nigeria the same way government saw that gold produced by illegal refiners in parts of the North and West could stand the quality standard of the London Bullion Market Association (LBMA).

It is also on record that illegal artisanally-refined petroleum products and crude alike are exported out of this country and billions of dollars lost to the Nigeria state the same way federal government saw that between 2012 and 2018 97 tonnes of gold valued at over $3billion was illegally smuggled out of Nigeria. In the case of crude, oil worth over $100million has been smuggled out of Nigeria over time and there is the need to immediately establish a Presidential Artisanal Crude Oil Refining Development Initiative-PACORDI as a corresponding initiative for those involved in artisanal crude oil refining in the Niger Delta.

WHICH STATES SHOULD BENEFIT FROM PACORDI? All the oil producing states in the Niger Delta and Nigeria in general

Jobs: PACORDI will result in the creation of over 1million new direct crude oil refining and formalized jobs and over 10million indirectly jobs leading to poverty alleviation for more than 20million households.

Wealth Creation: Under PACORDI, artisanal crude oil refining will earn more from higher productivity, better recovery rates, mechanization of operations, and better access to reliable geological information. Formalized artisanal crude oil refining will have significant spillover effects in the local economies as businesses will grow to cater to the increased consumption of their products by industries, motorists and households.

End to importation of refined petroleum products: With our conventional refineries working below 60% of its capacity according to NNPC, the creation of PACORDI to legalize and formalize artisanal crude oil refining in addition to Modular Refineries also being demanded for youths involved in artisanal refining in the Niger Delta, issues of scarcity and importation of petroleum products would be a thing of the past in Nigeria. Billions of dollars would also be saved and corruption in the subsidy payment process eradicated in Nigeria.

Productivity and Capacity-Building: PACORDI will boost productivity and output in the artisanal crude oil refining sector to compliment the output of conventional refineries. Through PACORDI, safer, more efficient and environmental friendly processing equipment and technologies would be developed and deployed across artisanal refining locations across the Niger Delta. Agreements would also be reached with relevant companies and laboratories that would ensure the testing of the refined petroleum products to meet required standards.

Revenues: PACORDI would enable the oil companies make more money from the sale of crude oil to artisanal refiners and the Federal Government would realize Billions of Naira in revenues, taxes, royalties and licensing fees and charges from the integration of artisanal crude oil mining activities that would be implemented by PACORDI.

Products Reserves: PACORDI will allow the Nigerian National Petroleum Corporation (NNPC) and other independent marketers to purchase locally produced PMS, DPK and AGO in Naira, save and boost the nation’s foreign reserves that was hitherto spent on petroleum products importation.

Thus, a more refined artisanal refining activity guided and regulated by PACORDI like the PAGMI of gold mining will safe our environment and health of those involved in it.

Security: It is obvious that the current state of illegal and unregulated artisanal crude oil lifting and refining activities contributes to insecurity in the Niger Delta and by extension, Nigeria.

The illegal artisanal refining activities fuel insecurity and instability in the region with intelligence reports confirming a connection between oil bunkering and proliferation of small arms and light weapons which contribute to security issues in the region. Thus, the establishment of PACORDI that legalizes formalizes and regulates artisanal crude oil refining and bunkering activities would address these challenges.

With PACORDI, government would understand and regulate the flow of resources and be able to track markets for their products and movement of funds across the sector. This will ensure transparency, accountability, discourage acts of criminality and improve security in the region among many other benefits of the initiative.

WHO WILL BENEFIT FROM PACORDI?

Details of the presentation can be downloaded here: Presentation on PAGMI and PACORDI