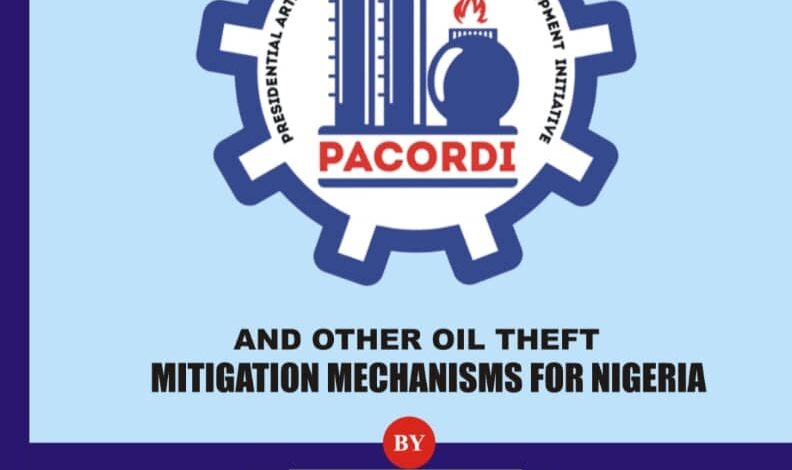 1. My message dated November 14, 2022 titled “FIGHT AGAINST PIPELINE VANDALISM, CRUDE OIL THEFT, ARTISANAL REFINERIES, POLLUTION, MITIGATION MECHANISMS, ALTERNATIVE LIVELIHOOD OPPORTUNITIES IN THE NIGER DELTA AND CONTRIBUTIONS OF FYNEFACE DUMNAMENE FYNEFACE AND YEAC-NIGERIA” in which I said “I may voluntarily tell you something very critical, important, informative, expository, factual and interesting in the days ahead when I have the time to do so between tomorrow, Tuesday, November 15 and Monday next week being November 21, 2022!” refers.

2. I conceived the “Presidential Artisanal Crude Oil Development Initiative (PACORDI)” on July 27, 2020. I used part of the Month of August 2020 to develop PACORDI in detail and titled it “THE DOCTRINE OF PACORDI”.

3. Towards the end of same month of August 2020, PACORDI was presented to the West African Advisory Board of Global Greengrants Fund (GGF), USA chaired by Rev. Dr. Nnimmo Bassey who is also the Director, Health of Mother Earth Foundation (HOMEF) as a new idea developed in an application titled “Training of artisanal refiners on alternative means of livelihood and disabusing their minds from re-pollution during Ogoni clean-up” and should be funded for advocacy for its establishment as part of measures to stop crude oil theft, artisanal refining and pollution for environmental sustainability in the Niger Delta among others.

4. On September 14, 2020 by 04:51PM (Nigeria time), Rev. Dr. Nnimmo Bassey sent an email titled “Re: Approval of Application from YEAC” to me, announcing that the application has been approved and that $3,500 awarded to YEAC for the project implementation and that an application form is attached for completion with the details of the project idea and submission. This Form was completed and submitted the next day being September 15, 2020 and Rev. Nnimmo Bassey forwarded it to Global Greengrants Fund (GGF) USA to fund the idea as approved.

5. On October 15, 2020, Global Greengrants Fund (GGF) USA sent an official email titled “Congratulations on your award!” to me with a letter titled “202-4850_Award_Letter” in Grant Number: 2020-4850 and that the amount has been sent to our bank account provided. The letter read thus in parts “We are happy to inform you that the Global Greengrants Fund, on the recommendation of the West Africa Advisory Board, has decided to give your organization a $3,500.00 equivalent grant.”

6. The amount was meant for the implementation of three activities; live appearance of Rhythm 93.7FM to discuss these issues which happened on October 31, 2020; training of artisanal refiners in Ogoni area including PACORDI which happened on November 16, 2020 and training of artisanal refiners in Rivers State and demand for PACORDI establishment like PAGMI (Presidential Artisanal Gold Mining Development Initiative) which happened on December 8, 2020 respectively and the project report submitted to GGF successfully. All these project activity reports are available on our website with pictures showing PACORDI during the training as prove.

7. However, in March 2021, someone, one Mr. Mao Nangi Obu came up that the idea of PACORDI belonged to him as he conceived it and published on his birthday, on Facebook page on October 20, 2020 and his Twitter handle on October 31, 2020 and that we (Fyneface and YEAC) should give him all the money we have received in funding on PACORDI which stood at $3,500 from GGF used for the project implementation at the time or face legal action after publishing defamatory things about us and calling us unprintable names on social media including that “Plagiarism is a crime in this country” and that we have committed that crime against him, hence our allegedly nicknaming him “Mr. Plagiarism” according to his own words that we borrowed.

8. When the threats and daylight robbery attempt came on Fyneface and YEAC with legal papers served on us by Mr. Mao Nangi Obu through his lawyer, a Senior Advocate of Nigeria (SAN), I quickly reached out to Global Greengrants Fund West Africa Advisory Board and United States of America (USA) through Rev. Dr. Nnimmo Bassey, reported the threats and incident over the idea (PACORDI) that they funded with $3,500, sought permission to produce all supporting documents about the project in court, mention his and GGF’s name in a lawsuit to clear our names of the allegations and the permission was granted in a final physical meeting held same March 2021 with Rev. Dr. Nnimmo Bassey at Polo Court Hotel, Port Harcourt, Rivers State.

9. On April 1, 2021, Fyneface Dumnamene Fyneface and YEAC-Nigeria approached the Court, filled a libelous suit against Mr. Mao Nangi Abu on this issue in Suit No. PHC/1057/CS/2021 and all these documents and evidence that showed that I conceived the idea of PACORDI first, received $3,500 in funding from GGF, etc. before that date he stole it from us all submitted to him and he has copies with him. The matter is ongoing in a Rivers State High Court sitting in Port Harcourt with the next hearing date being November 30, 2022.

10. For the summary of what PACORDI is all about and seeks to achieve, see the banner attached here.

11. In March 2021 and March 2022, the Federal Government organized national summits for the integration of artisanal/modular refineries operations into the national economy which is what PACORDI preaches and the Federal Government through the offices of the Senior Special Assistant to the President on Niger Delta Affairs and Presidential Amnesty Programme invited me to speak about PACORDI and related issues and in the March 2022 event, PACORDI was formally adopted by the Federal Government and mentioned in the communiqué issued to the public. On April 20, the President of Nigeria through his S.A., on Niger Delta Affairs, Sen. Ita Enang wrote an official letter to me on it and other matters for partnership.

13. The new idea to fight crude oil theft, illegal bunkering and artisanal refineries was conceived on June 15, 2022. On July 12, 2022, it was awarded $14,000 in grant for advocacy and launching of the new idea by a funding organization in Vienna, Austria for implementation in August 2022. However, this has been shifted to first quarter 2023. Meanwhile, this idea will be disclosed and made public for the first time during my presentation to the National Council on Hydrocarbon (NCH) at its 7th Edition holding in Minna, Niger State where I am invited by the Federal Government through the Ministry of Petroleum Resources to address them on my project with artisanal refiners, PACORDI, Energy transition, etc.

14. I will disclose this new idea that has already received international support to you shortly after its public unveiling/presentation with others in a publication titled “THE DOCTRINE OF PACORDI AND OTHER OIL THEFT MITIGATION MECHANISMS FOR NIGERIA” at NCH (see the attached cover). 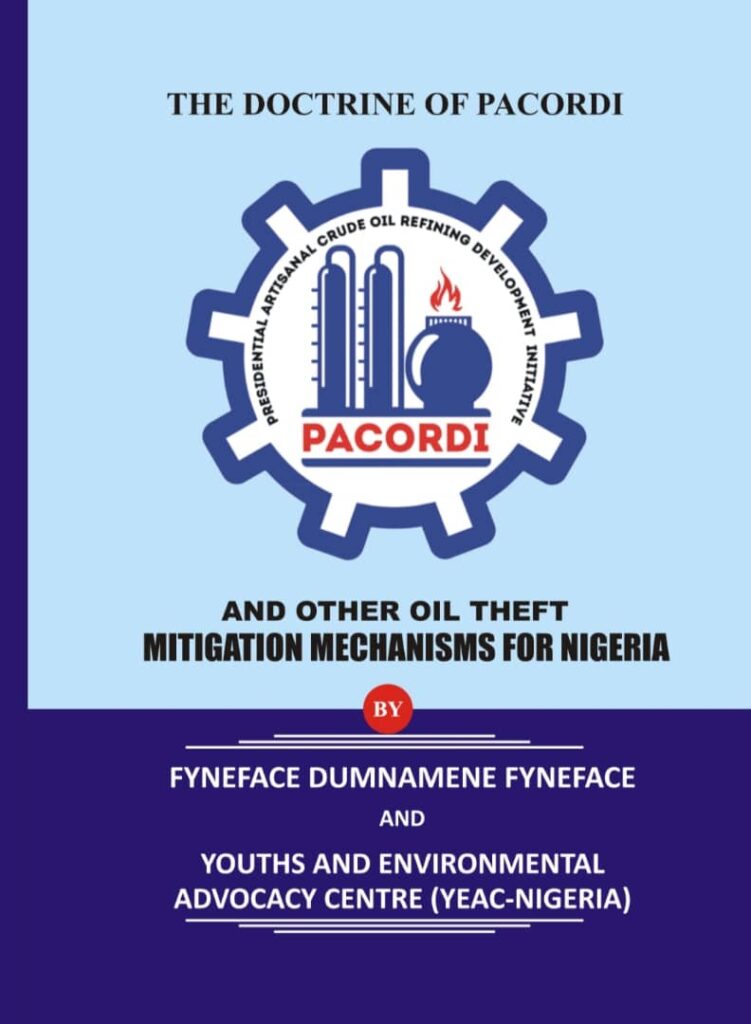 15. THANK YOU FOR YOUR TIME AND MAY THE CREATOR CONTINUE TO BLESS THE WORKS OF YOUR HANDS AS YOU SEE THE LIGHT, THE TRUTH AND STAND BY IT IN YOUR DAILY ENDEAVOURS! ALL OF US AT YEAC-NIGERIA AND UNITED KINGDOM APPRECIATE YOU ALL! THANK YOU.