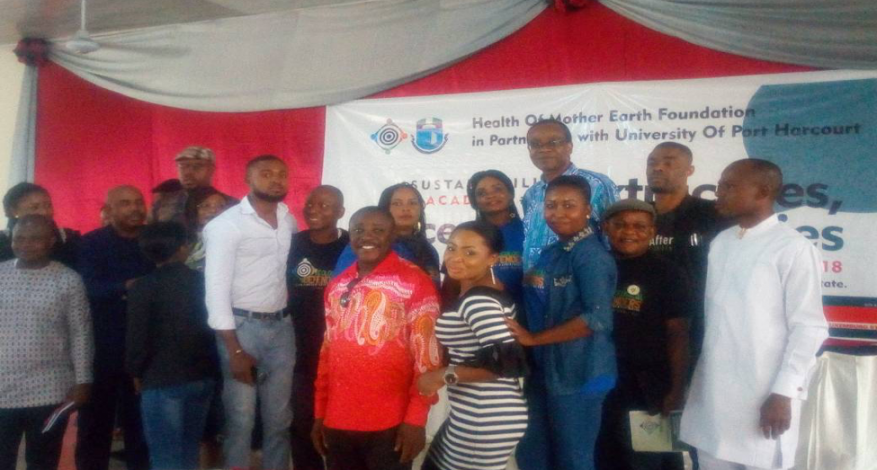 The Youths and Environmental Advocacy Centre (YEAC) on Friday, August 31, 2018, mobilized some volunteers under the auspices of Ogoni Ecological Defenders for participation in Health of Mother Earth Foundation (HOMEF) Sustainability Academy organized in partnership with the University of Port Harcourt, Choba.

The Sustainability Academy which has “Extractives, Fisheries and Oceans” as its theme was is the 11th in the series and was hosted by Centre for Conflict and Gender Studies, University of Port Harcourt under the Acting Directorship of Associate Professor Fidelis Allen who also spoke at the event. Also speaking at the event were eminent environmentalists, human rights activists, academics including Rev. Nnimmo Bassey, Director, Health of Mother Earth Foundation (HOMEF), Jacqueline Moundeina, a Chadian Human Rights Activist, Dr. Babatude Benard Bolji, among many others.

The Eco-defenders and environmental monitors who had been previously trained by Health of Mother Earth Foundation but invited to the event to update their knowledge include Damian Gbobara from Bodo Community, Fyneface Dumnamene Fyneface from Kabangha Community Confidence Yeye Chujor from Eleme, Esther Ndeesor from Luebe, Ngbiidam Dornubari from Nonwa, Lucy Ntogo-Bakor from Gokana among others. The Eco-defenders expressed joy over the opportunity to received such impactful lecture in the University of Port Harcourt, a conducive environment that enhanced their understanding “I am grateful to HOMEF for this training that has further improved my knowledge about environmental issues, extractives fisheries and oceans and the roles that they place to support our lives” Mr. Damian said.

(CROSS SECTION OF ECO-DEFENDERS WITH HOMEF DIRECTOR, REV. NNIMMO BASSEY)
The highpoint of the event that Health of Mother Earth Foundation supported Advocacy Centre to mobilize its Eco-defenders to attend was the presentation of Awards of Fellow of the Sustainability Academy to the Chadian Rights Activist, Jacqueline Moundeine, Dr. Bolaji Babatunde and presentation of Certificates of Participation to participants by the Director of HOMEF, Rev. Nnimmo Bassey.

(ACTIVIST JACQUELINE MOUNDEINA RECEIVING HER AWARD FROM HOMEF DIRECTOR, NNIMMO BASSEY)
Youths and Environmental Advocacy specially appreciates the support of Health of Mother Earth Foundation and for trusting us with funding support to carry out this mobilization. We look forward to further partnership and collaboration in the days ahead.