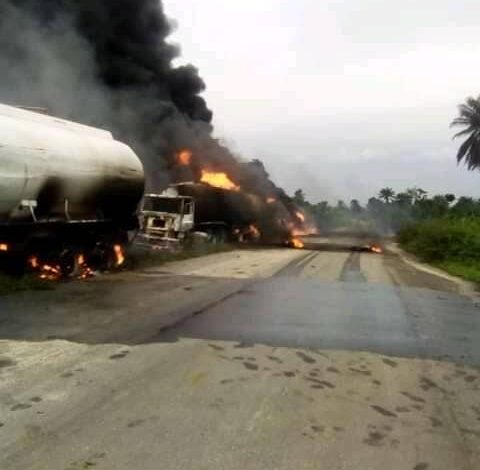 August 15, 2022By admin0 comment
Report reaching the Executive Director of YEAC, Fyneface Dumnamene Fyneface, Executive Director, YEAC-NIGERIA from the scene of the incident of setting ablaze tankers by security Operatives that I earlier reported yesterday, August 13 at ETE-O area, close to Ebubu Community, shortly after Trailer Park junction by the on the East West road in Eleme Local Government Area has it that some persons, about six of them including “Uniform Men” are allegedly feared killed and others hospitalized by today. Two bodies are said to have been sighted at the scene today.
The new breaking news has it that incomplete combustion of the tankers occurred yesterday with the tanker still standing and partially burnt. As such, many community people who have been having a filled day scooping products since the incident occurred were at the scene today for more scooping of products. As a result of the increase product scooping activities with some of them climbing the tankers, the tanker that was still standing with some product in it is said to have exploded in the precess, leading to the alleged deaths, burns and injuries to those caught in the fire including a dead body said to be in “security uniform”
More details to come as Youths and Environmental Advocacy Centre’s (YEAC) Advocacy Centre members of its “One Million Youth Volunteers Network of Human Rights Defenders and Promoters in the Niger Delta” in the area who are further reporting have been drafted to gather more details with photographs of the incident.
ADVOCACY CENTRE calls on the Police and other relevant authority to visit the site of this incident immediately, stop communities and residents in the area from further going to the site for the scooping of petroleum products. Fire 🚒 Service should also be drafted to the scene to ensuring that all remnants of fire is put out and the debris of the tankers safely evacuated and the area cleaned up to restore the environment that has been damaged by the security Operatives that carried out this environmental crime against the people in the process of stopping another organized crime in the wrong way, as it is their usual practice in the Niger Delta.
FYNEFACE DUMNAMENE FYNEFACE,
Executive Director, YEAC.
14-08-2022