The paramount ruler of Kporghor community in Tai Local Government area of Rivers State, Chief Emmanuel Gbarabulah has called on the Federal Government to hasten the implementation of its policy on modular refineries for youths involved in artisanal crude oil refining in the Niger Delta. Chief Gbarabulah made the call on Sunday, February 9, 2020 during a sensitization and consultative town hall meeting organized in his community by Youths and Environmental Advocacy Centre (YEAC) on the registration/creation of database of artisanal in the Niger Delta. The sensitization which was organized as part of ongoing efforts by Advocacy Centre, partnering with traditional rulers who were directed by President Muhammadu Buhari on January 10, 2020 (by the Minister of State for Environment, Mrs. Sharon Ikeazor) during the inauguration of the National Oil Spill Detection and Response Agency’s (NOSDRA) Laboratory in Port Harcourt to create the database had the council of chiefs, community leadership, youths and women groups in attendance. In his words, Chief Gbarabulah said “The Federal Government should hasten the implementation of the Modular Refineries to re-engage the youths involved in oil theft and artisanal crude oil refining so that their acts would be lawful. This is because; stopping them from illegal refining has rendered them jobless and caused a lot of crime in the community. So, if I and my entire community are ready, then why is the government delaying to bring the modular refineries?” 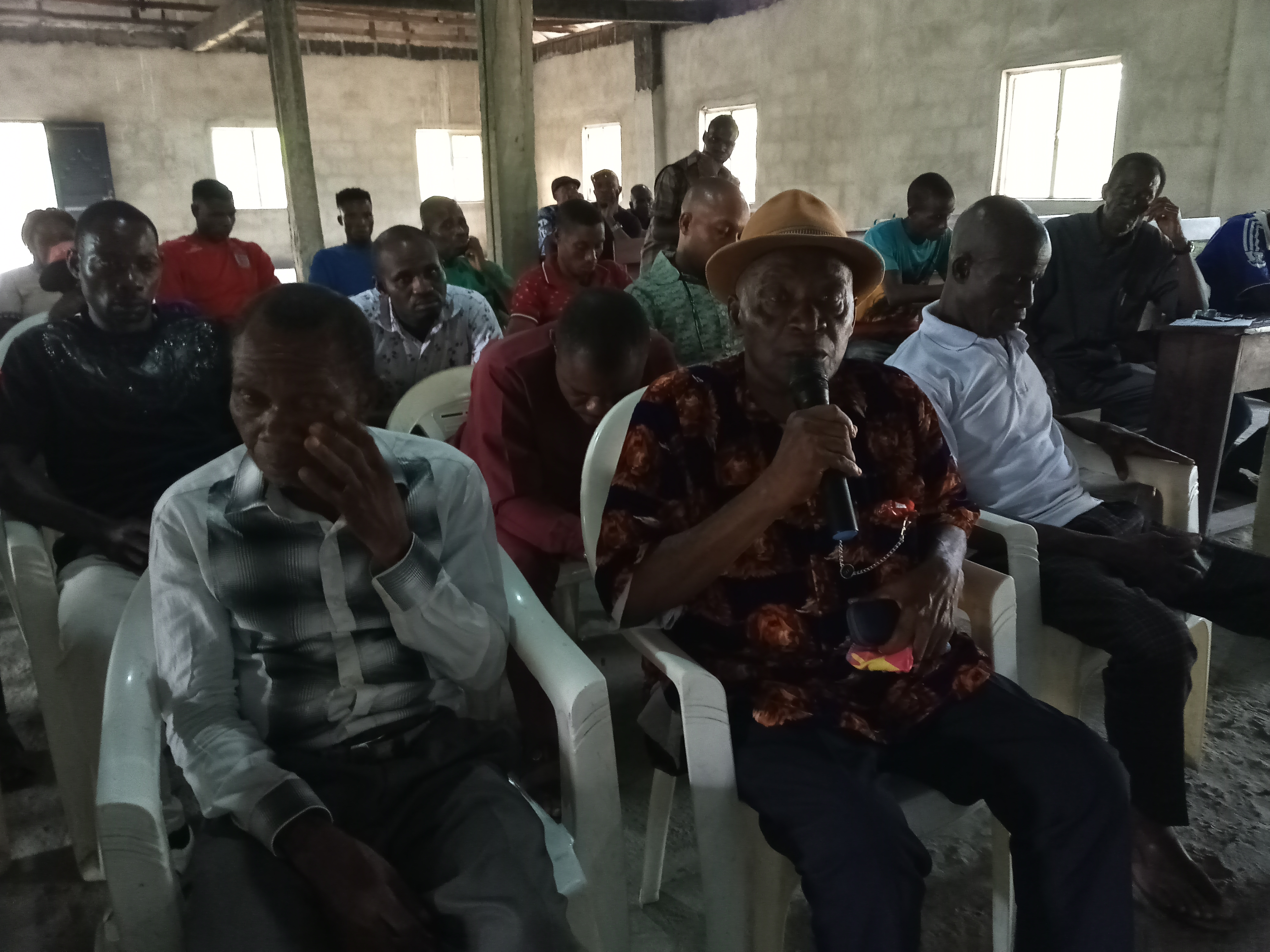 Speaking during the sensitization program, the Executive Director of Advocacy Centre, Fyneface Dumnamene Fyneface summarized past trainings already organized for artisanal crude oil refiners in the Niger Delta including guidelines for the establishment of modular refineries, costs implications, licenses to be issued by the Federal Ministry of Petroleum Resources, etc and introduced them to the registration process which involved filling a free registration form and texting their details to register on the secured online database. Comrade Fyneface enlightened the community leadership that said after collecting and completing the free registration form, the affected youths should text YEAC THEIR FORM SERIAL NUMBER, FULL NAME, SEX, AGE, HIGHEST ACADEMIC QUALIFICATION, NAME OF COMMUNITY AND STATE OF RESIDENCE to 33811. 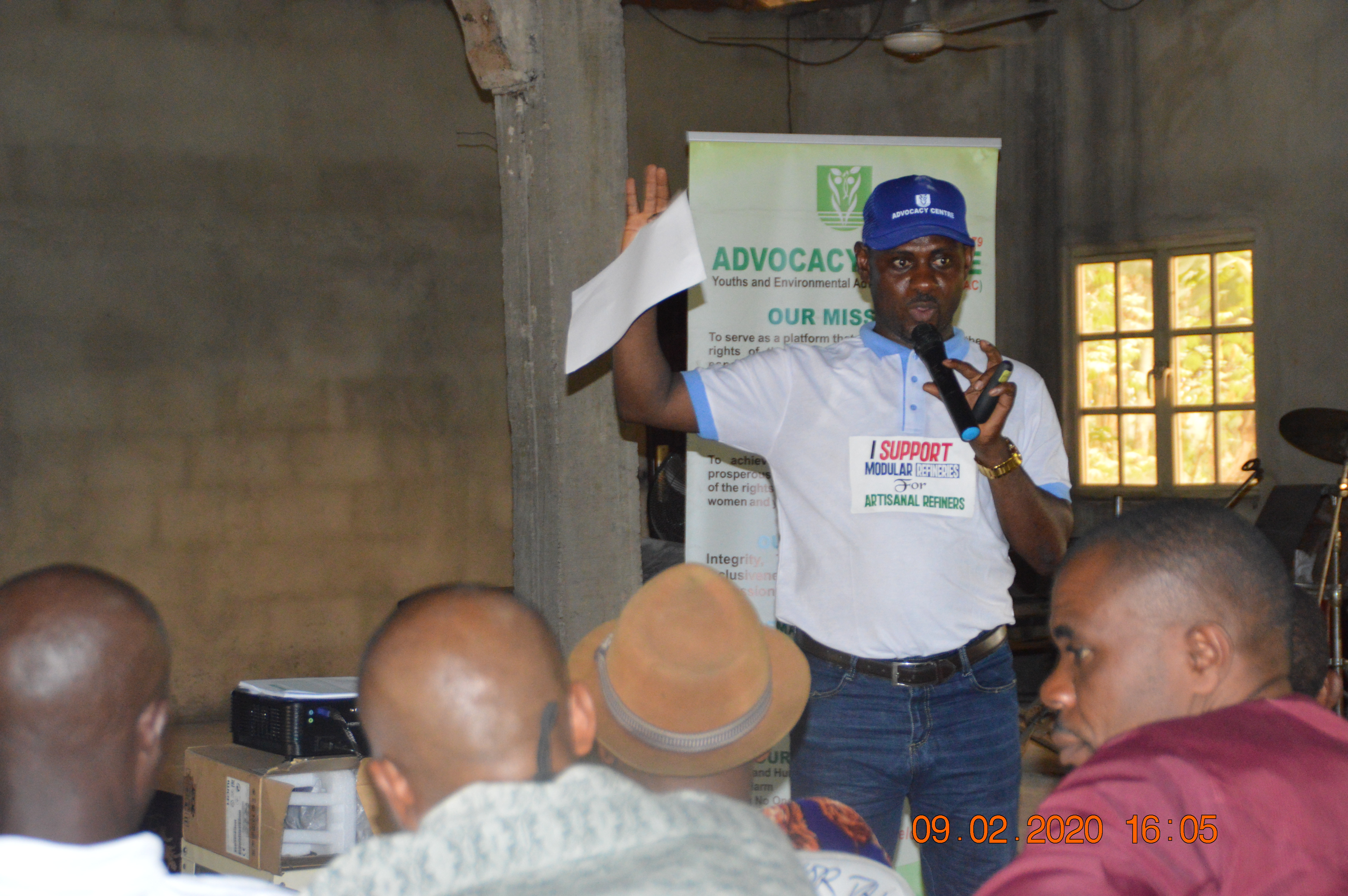 (The Executive Director of Advocacy Centre, Fyneface Dumnamene Fyneface, speaking and showing the community leaders a copy of the free registration form for data collection at the sensitization program)

Reacting to the training program information with series of rhetorical questions, a youth who is also an artisanal refiner expressed doubt that the Federal Government would keep to the promise of given them licenses for the establishment of Modular Refineries or whether government just wants to use it as excuse for stopping them from artisanal refineries which is their source of survival. He said “How are we sure that this modular refinery would come? What have government done since many years ago that the talk about this modular refineries? If government really wants kpofire to stop, then, where is the alternative means of livelihoods? Do government really wants to build modular refineries or they just want to use it as excuse for the destruction of our camps?” 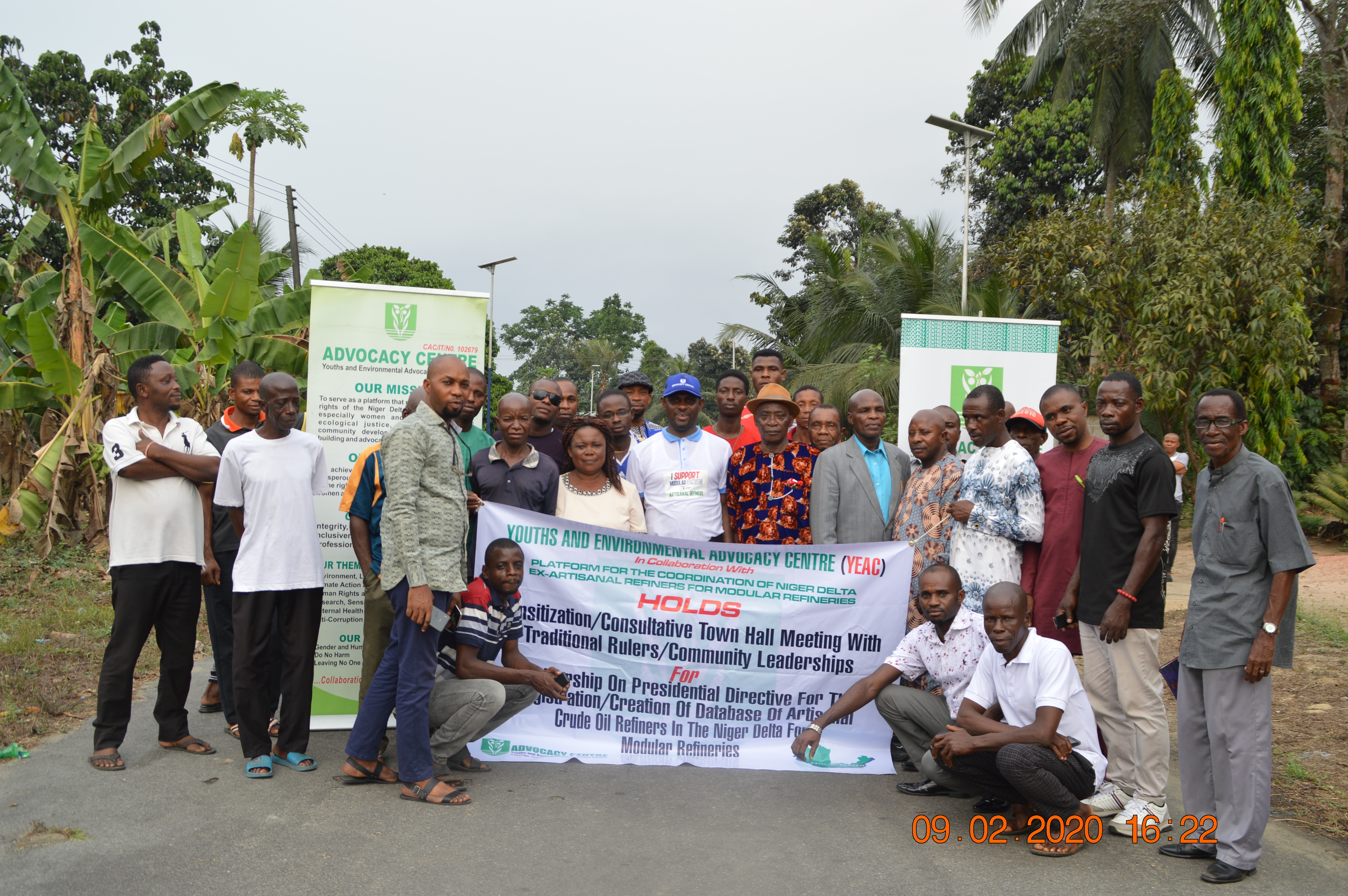 (A cross section of community leadership participants at the sensitization/town hall meeting in Kporgho community on February 9, 2020)

Responding, the Director of Advocacy Centre expressed optimism that with the Presidential Directive for the creation of the database of artisanal crude oil refiners, formation of cooperatives and application for licenses for modular refineries that he believes that the government would keep to its words. Adding that this modular refinery initiative of the Federal Government is in response to our campaigns and would among others address issues around artisanal refining in the Niger Delta to reduce pipeline vandalism, oil theft, environmental pollution, loss of revenue and create jobs for the youths which are in line with our aims and objectives at ADVOCACY CENTRE. 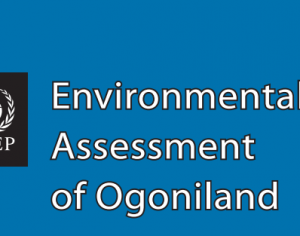