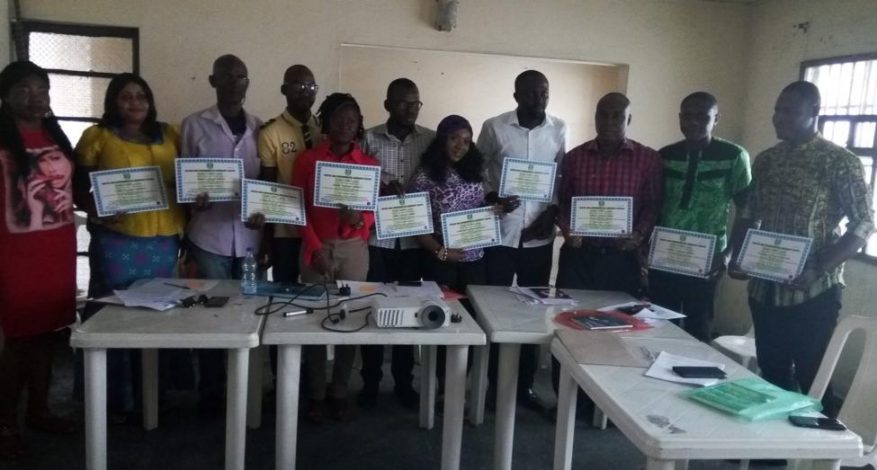 Youths and Environmental Advocacy Centre (YEAC) organizes special training for youths on “Conflict Resolution and Peacebuilding Mechanisms in the Niger Delta”.
The 4-days long programs which held between July 31st and August 3, 2018 in Port Harcourt, the Rivers State capital was supported by Pax Viva Foundation, a Rivers State based nongovernmental organization.
Participants received training based on research, training and experiences gained by the Executive Director of YEAC, Mr. Fyneface Dumnamene Fyneface from different organisations and institutions during his participation in the International Visitor Leadership Program (IVLP) in the United States of America between June and July, 2018. Mr. Fyneface had during the Leadership Program organized by U.S. Department of State and funded by the American Government received trainings and gained experiences in Washington DC, Maryland, South Dakota, North Dakota, Louisiana and Mississippi while he travelled through Georgia, Minnesota and Colorado. The training on conflict resolution and peacebuilding which was part of activities to stepdown the IVLP experience focused on training and experiences from United States Institute of Peace (USIP); Conflict Resolution Center of Montgomery, Maryland; Native American-led Conflict Resolution Strategies as demonstrated at Standing Rock, North Dakota in 2016 during the Dakota Access Pipeline (DAPL) crisis and Community self-help projects/volunteerism as conflict resolution mechanisms at Thunder Valley Community Development Corporation, South Dakota, USA.
On the first day of the training, participants were introduced to Conflict Resolution mechanisms and strategies modelled towards courses offered by Conflict Resolution Center of Montgomery, Maryland. Participants learnt about conflicts, causes of conflict and conflict management strategies and approaches. The conflict management strategies taught include ways of avoiding conflict, accommodating, collaborating, compromising and competing as conflict resolution strategies. Types of conflict resolution tactics like starting a discussion, written communication, mediation and working on a compromise were also explored among many others.

The second day of the training saw participants learnt about Native American-Led conflict resolution strategies as demonstrated at STANDING ROCK India Reservation, North Dakota in 2016 when the Sioux Tribe was faced with the challenge of Dakota Access Pipeline (DAPL) conflict.

(TRAINING SESSION)
On day three, participants received training on peace and peacebuilding based on materials brought from Washington DC, research materials and those downloaded from the website of the United States Institute of Peace (USIP).
The last day of the training saw youths learning about community self-help projects and volunteerism as conflict resolution and peacebuilding mechanisms as evident in the works at Thunder Valley Development Corporation in South Dakota. They also gained knowledge about Feeding South Dakota Store project in Rapid City, South Dakota where donations are made to low income individuals and families in the society and how they can extend some support to low income earners in the Nigerian society. The participants were also taught photographic skills, the role of photography in advocacy, development and reporting in the civil society, etc. using a 254-page book authored by Mr. Fyneface Dumnamene titled “The Principles of Photography” (2008). Participants also learnt about leadership, leadership skills with Kabari Sam, Ph.D of Centre for Environment, Human Rights and Development (CEHRD) facilitating a session on qualitative research methodology and ways of undertaking perception study.

(TRAINING SESSION WITH DR. KABARI SAM)
At the end of the training, participants were presented with Certificates of Participation with an assurance by Mr. Fyneface that the training would be a continuous one and expanded to accommodate more youths as part of activities to stepdown the training and experiences from the IVLP as more funding supports are received. “It is our hope, as funds become available that this training would be expanded to accommodate and benefit more people and the series continued for youths to bring about peace and a conflict-free Niger Delta region for development to thrive” Mr. Fyneface Dumnamene said.

(ALL THE YOUTHS TRAINED DURING THE PROGRAM)