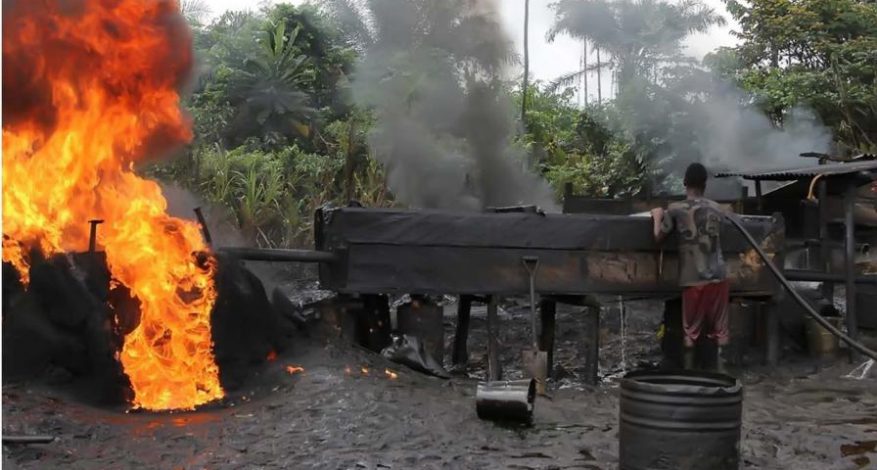 Over the years, modular refineries have dominated discussions among scholars, civil society organizations, the organized private sector and governments as alternative policy option that can address the perennial twin menace of crude oil theft and artisanal refining in the Niger Delta region of Nigeria. Youths in the Niger Delta that engaged in crude oil theft and artisanal refining contribute to the massive oil spills with an estimate 400,000 barrels of crude oil stolen daily with unaccounted volume spilling into the environment in the processes.

Youths that engaged in oil theft and artisanal refining argue that they do so to earn a living due to lack of jobs. Justifying their actions further, those youths said nothing is fundamentally wrong with what they are doing as they do not agree that the oil they tap illegally is stealing. Not minding the negative economic and environmental impacts of their activities, they claim that they are only ‘collecting’ what is found in their soil and rightfully belongs to them. If you press further, insisting that what they are doing is stealing because, it is illegal; they would reply that, it is the government and international oil companies that are actually stealing oil from the region and then go on to accuse the Nigerian political elites as the real thieves who share the stolen proceeds of oil in Abuja through corrupt practices leaving little or nothing for the development of the oil producing region.

Government believes that apart from the negative environmental impact of oil theft and crude oil refining, such activities made huge sums of money available in the wrong hands which are in turn used for the acquisition and proliferation of small arms and light weapons being used by militants and other groups to threaten the peace and increase restiveness in the Niger Delta region. In reaction to these, the federal government took steps to curtail the activities of youths engaged in oil theft and artisanal refineries through the empowerment of the Nigerian Security and Civil Defense Corps (NSCDC) and a joint military task force (JTF) now known as Operation Delta Save to provide security for the pipelines from vandalism and stop those engaged in oil theft and artisanal refining in the Niger Delta.

Although it is difficult to measure the actual achievements of these security formations in the task of curtailing pipeline vandalism and illegal oil theft in the region, observations and research have shown that their mandate have not made any significant difference as oil theft seems to be on the increase with about 400,000 barrels of crude oil stolen per day; 70% of which are said to be successfully exported out of the country and the remaining 30% illegally refined locally through the support of some of the security operatives that aid and abet it for a token amount in return. On the other hand, those involved in the about 30% locally refined crude oil even boast that the security operatives cannot stop them and that their products are competitive with those refined at the main refineries. Some of those interviewed on this said that the illegally refined petroleum products like fuel, kerosene and diesel support local demand and contribute to the sustenance of the Nigerian economy such that if they stop operation over a period of time, there would be energy crisis in Nigeria as some of their products are also bought and distributed nationwide by tanker drivers and registered marketers.

As ridiculous and unbelievable as the above claims may sound, it seems to have some elements of truth. Recent actions of government and their policy directions and options had also shown that current operators of illegal refineries are playing significant role and can do more if given the opportunity. Thus, while the government seems helpless in stopping the about 70% of crude oil stolen and exported successfully from Nigeria daily, its recent policy options are targeted at addressing issues around the 30% of crude oil stolen and refined locally. Partly due to the inability of the security operatives to contain the activities of youths involved in oil theft and artisanal refineries, partly in recognition of the contributions of youths engaged in artisanal refining to the energy needs in Nigeria and partly as a response to calls by some scholars, civil society organizations like Social Action, the federal government had taken steps to formally integrated youths involved in illegal oil theft and artisanal refineries into the downstream sector of the economy through plans to replace the local refineries with Modular Refineries. This policy option, modular refineries, as a way of addressing the twin menace of oil theft and artisanal refineries was among recommendations made by Social Action in 2016 in one of its briefing papers titled “Cleaning in a Vacuum: Policy Options for Addressing Crude Oil Refineries and Pollution in Nigeria”.

For many years running, there have been calls on the Government of Nigeria to support the initiative of modular refineries as an alternative to illicit artisanal refining and its attendant environmental impacts. Thus, in searching for solutions to the problem, Social Action, in 2016 re-echoed the call for the introduction of modular refineries as a policy option especially as an earlier report titled “Crude Business: Oil Theft, Communities and Poverty in Nigeria” published by Social Action in 2014 revealed damning findings about dirty deals in the crude business, culpability of security operatives and poverty in Nigeria.

Building on these backgrounds, Nigeria’s Acting President, Prof. Yemi Osinbajo during his tour of States and communities in the Niger Delta region in February 2017 made pronouncements that the Government would replace illegal refineries in the region with modular refineries for the youths who prefer that line of business as means of livelihoods. This Government statement came at a time that Social Action had fixed March 21st, 2017 as date for a “National Conference on Oil Theft and Artisanal Refineries in Nigeria” to bring together diverse stakeholders and discuss these issues and proffer solutions to the problem through recommendations. Shortly after the national conference, some Niger Delta youths who still engage in oil theft and artisanal refining as well as those who have jettisoned the trade reacted to the Government’s pronouncement on modular refineries by converging in Delta State to synthesize the information in a sensitization workshop and strategize on ways of keying in and benefitting from the policy on modular refinery proposed for the region.

However, the joy of Federal Government’s pronouncement on modular refineries for youths in the Niger Delta was short-lived as artisanal refineries’ operators in the region got information from an alarm raised by the Rivers State House of Assembly Committee Chairman on Environment, Hon. Christian Anyakwo in June, 2017 that the All Progressives Congress (APC) and President Muhammadu Buhari led Federal Government had approve 65 modular refinery licenses to all non-Niger Delta companies and individuals. It would be recalled that, apart from the 3 modular refinery licenses approved under former President Goodluck Jonathan administration, Social Action in its “Cleaning in a Vacuum” briefing paper of October 2016 hinted that 65 modular refineries licenses were approved for interested companies in the early days of this administration.

The agitations among Niger Delta youths today is for the government to reverse the 65 modular refinery licenses that did not favour the Niger Delta people. Operators of artisanal refineries believe that metamorphosing into operators of modular refineries will save them the threats, arrests and destruction of their illegal refineries by security operatives who in the process spill the confiscated product into the environment and contribute to pollution and black sooth emissions as they set the products ablaze.

Talking about black sooth, it has been a regular occurrence in parts of the Niger Delta especially in Delta and Rivers State since 2016. The sooth which are black particles resulting from incomplete combustion of materials that deposit on cars, roofs and any other thing left in open air are blamed on activities of artisanal refineries, asphalt companies and abattoir operators who use condemned vehicle tyres to roast cow and goat skins. While the afore-mentioned sources contribute to black sooth emissions, Social Action believes that the bulk of it comes from the incessant and indiscriminate burning of tankers, vessels, artisanal refining sites and other oil laden containers by men of the Operation Delta Save, Nigerian Navy and Nigerian Security and Civil Defence Corps (NSCDC) in the region. This also contributes to massive environmental pollution and deliberate oil spills in the Niger Delta. For instance, the Nigerian Navy’s Chief of Naval Staff, Vice Admiral Ibok-EteIbastold Channels Television on June 5, 2017 that they have so far destroyed over 500 illegal refineries in the Niger Delta for the past six months of 2017 alone. As good as this may sound, as we also know, crude oil and other products recovered from these illegal refineries are not safely evacuated but deliberately destroyed with the illegal refineries and the contents spilt into the environment.

It is against these backgrounds that Social Action recommends that the 65 modular refineries licenses allegedly awarded to all non-Niger Delta companies are reconsidered for people of the region to participate in the downstream of the petroleum industry, benefit from the policy as oil bearing region and nip possible unnecessary uprising against the policy in the bud. This is because, pulling operators of artisanal refineries out of the creeks into modular refinery operation with operational guidelines will save our environment, create employment, reduce restiveness, give the people of the region a sense of belonging, rekindle the hope of the people of the Niger Delta in the Government and earn government revenue through taxation. The security operatives should ensure that they safely evacuate crude oil and other petroleum products confiscated from illegal refineries before destroying the sites. Besides, the destruction of illegal refineries as currently practiced by security operatives should not imply burning of the metal and other material and products found on site because, apart from its pollution tendencies, such action causes the emission of black sooth into the atmosphere. Such destruction should mean that the products are evacuated to the refineries and other metal materials also safely evacuated without setting them ablaze.