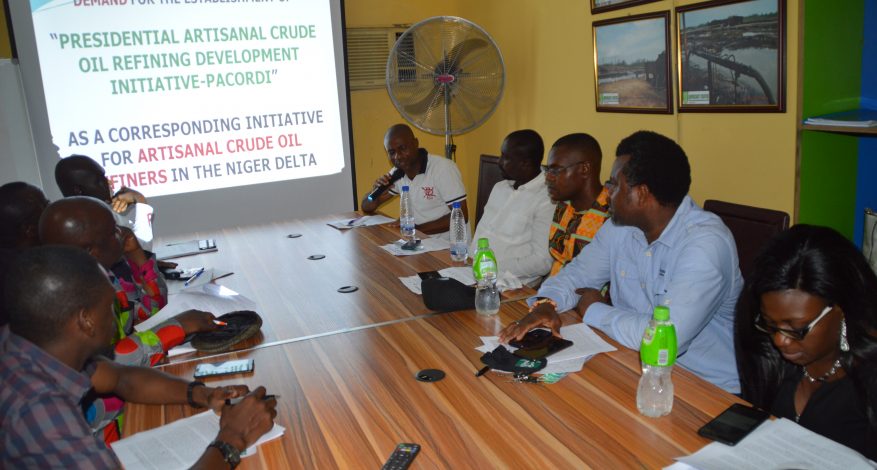 Youths and Environmental Advocacy Centre (YEAC) on Tuesday, December 8, 2020 organised sensitization program for artisanal crude oil refiners in Rivers State on Presidential Artisanal Gold Mining Development Initiative (PAGMI). The program which held at Anyakee Nsirimovu’s Conference Hall, Advocacy Centre, Port Harcourt was organized with support from Global Greengrants Fund also served as a Press Conference which the artisanal refiners used to demand for the establishment of “Presidential Crude Oil Refining Development Initiative (PACORDI)” as a corresponding initiative for artisanal crude oil refiners in the Niger Delta. PAGMI is a comprehensive artisanal and small-scale gold mining development programme, launched on July 16, 2020 by the Federal Government to foster the formalization and integration of artisanal gold mining activities into Nigeria’s legal, economic, and institutional framework. As such, considering similarity between illegal artisanal gold mining in parts of the North/Southwest and artisanal crude oil refining in the Niger Delta, the demand for the establishment of a corresponding initiative for artisanal refiners in the Niger Delta became imperative for environmental sustainability in the region. 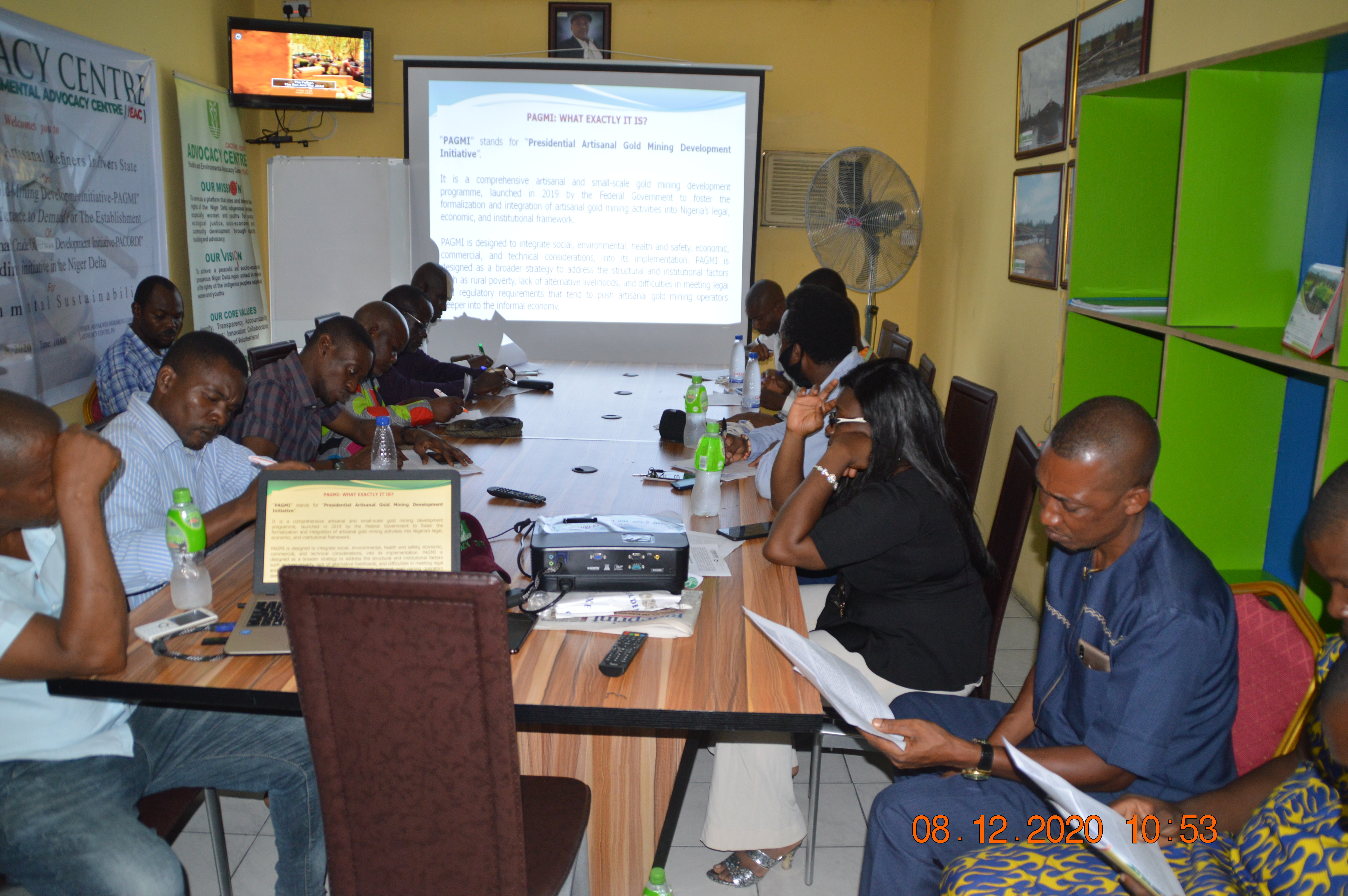 Speaking during the sensitization program and media conference, the Executive Director of Advocacy Centre, Fyneface Dumnamene Fyneface stresses the need to formalize and integrate artisanal crude oil refining activities in the south into the nation’s economy like what is now obtained with illegal gold miners. Fyneface said PACORDI is wanted for youths in the Niger Delta because the environment is polluted by youths involved in artisanal crude oil refining as their activities are contribution to environmental pollution, loss of revenue to government, loss of funds to oil multinationals who spend so much to fix pipes vandalized by artisanal refiners to access crude for their illegal activities and that if we have a Presidential Artisanal Crude Oil Refining Development Initiative established for the youths, the body will formalize what they are doing, regulate their activities, guide them to make sure that whatever they are doing is in line with the regulatory framework of the government and the opportunity will create jobs for the people. 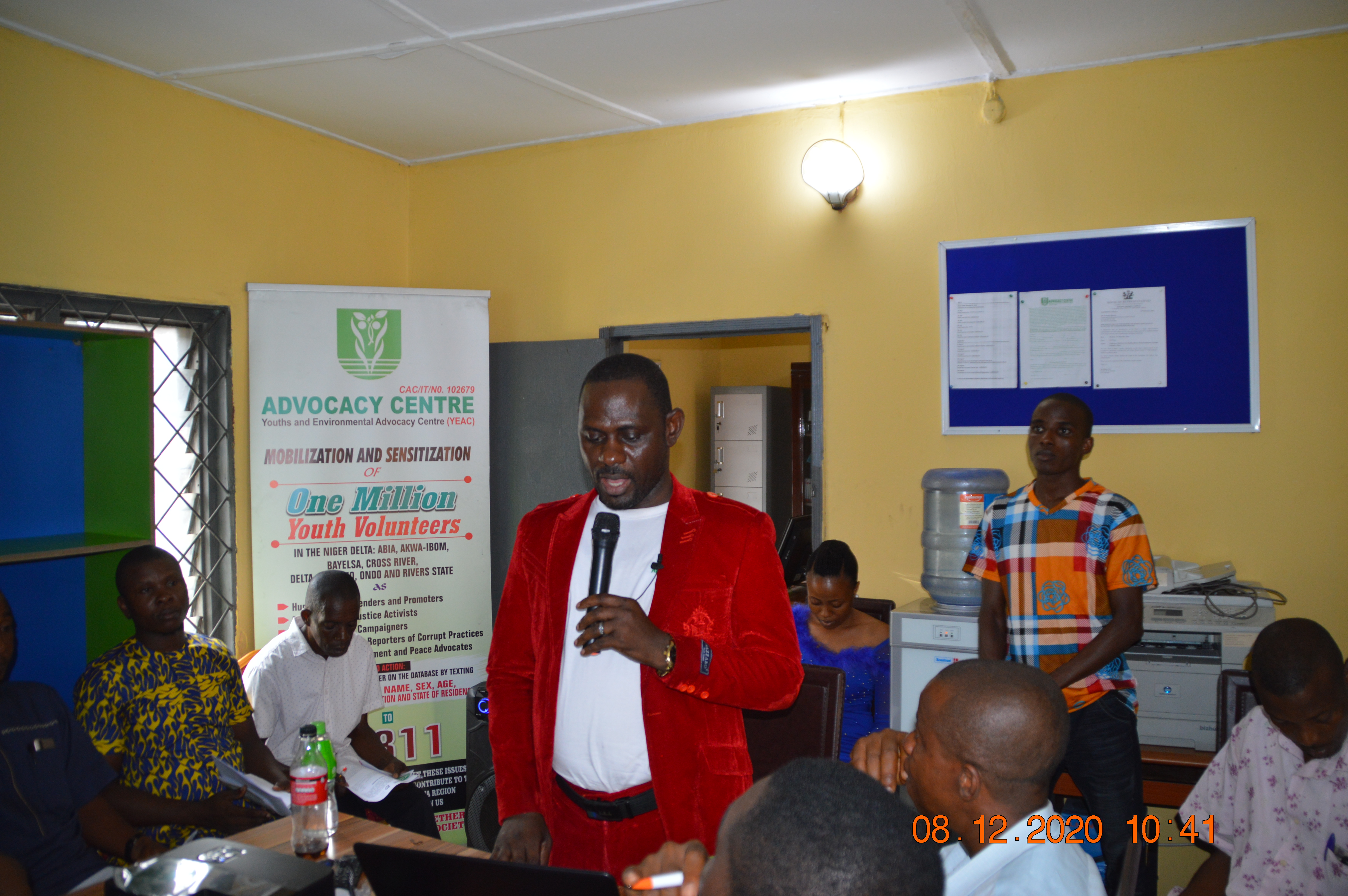 Fyneface further said the establishment of PACORDI will also prevent the activities of artisanal refiners from contributing to environmental pollution the way it is now adding that “If we can have the legalization of illegal miners in the north, I think that it is also important that we have the legalization of illegal crude oil refiners in the Niger Delta region so that the system will work pariparsu to create wealth for the country”. Mr. Fyneface who was also the resource person that sensitised the artisanal refiners argued that PACODRDI will not only benefit the federal government realise revenues in taxes, royalties, payment for licensing but would also benefit the multinational oil companies that would sell crude to the artisanal refiners, the Central Bank of Nigeria that would reserve foreign exchange because both Nigeria National Petroleum Corporation (NNPC) and Major Oil Marketers will no longer run to it for foreign exchange because they would by buying petroleum products hitherto imported from the artisanal crude oil refiners in Naira, same way it is being done with the illegal gold miners under PAGMI. Conclusively, he submitted that illegal refiners under PACORDI will no longer be involved in illegal activities that make security operatives to chase them around nor contribute massively to insecurity through the proliferation of small arms and light weapons they possessed for self-defence in the illegal business but stop environmental pollution which will benefit fishermen and farmers whose sources of livelihoods are currently affected by the ecological challenges from hydrocarbon pollution in the region. More details about the sensitization and materials are available and downloadable HERE

Commenting at the event, a participant, Favour Udoma praises the idea of PACORDI for artisanal refiners. She said she is aware that the Governor of Zamfara and Kebbi States were involved and that Niger Delta Governors should partner and support this proposal by Advocacy Centre to ensuring the timely establishment of Presidential Artisanal Crude Oil Refining Initiative for artisanal refiners in the Niger Delta. 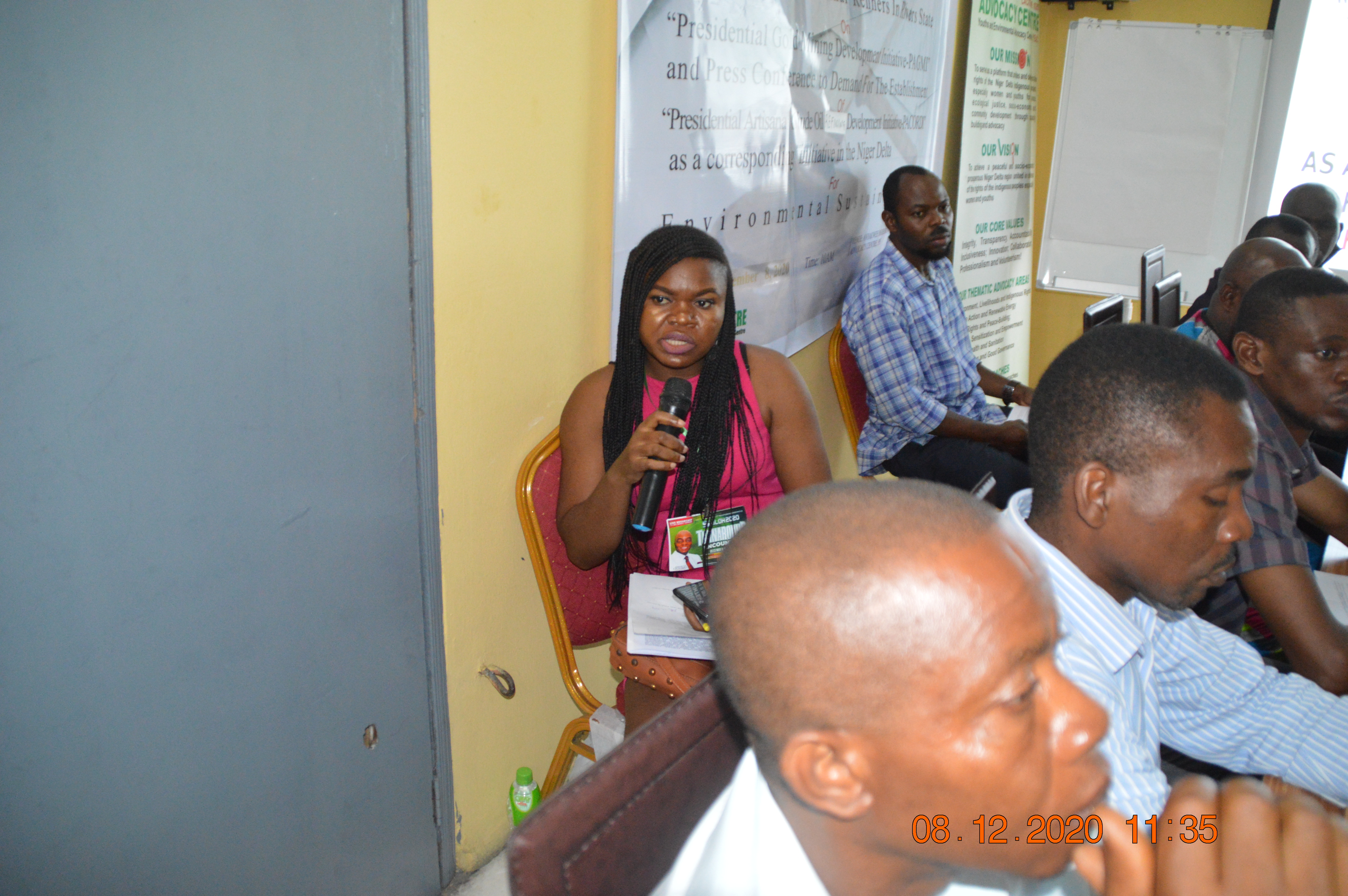 Also reacting to the sensitization, another participant, Mr. Basil Nkpordee from Kaani Community in Khana Local Government Area said “if the federal government can quickly inaugurate PAGMI for illegal miners in other parts of Nigeria, they should also do same for our brothers that are involved in artisanal crude oil refining in the Niger Delta” Adding that “what is good for the goose is also good for the gander. We are in one Nigeria. If actually we are in one Nigeria, So, government should quickly establish PACORDI for the artisanal crude oil refiners”. Mr. Basil further supported his argument with the fact that failure to establish PACORDI for youths in the region would further aggravate acts of insecurity when they realized that their counterparts in illegal gold mining in the North and Southwest have been recognized by the Federal Government through PAGMI and that “for us not to have another round of youth restiveness in the Niger Delta, government should quickly recognize Presidential Artisanal Crude Oil Refining Development Initiative for the Niger Delta” 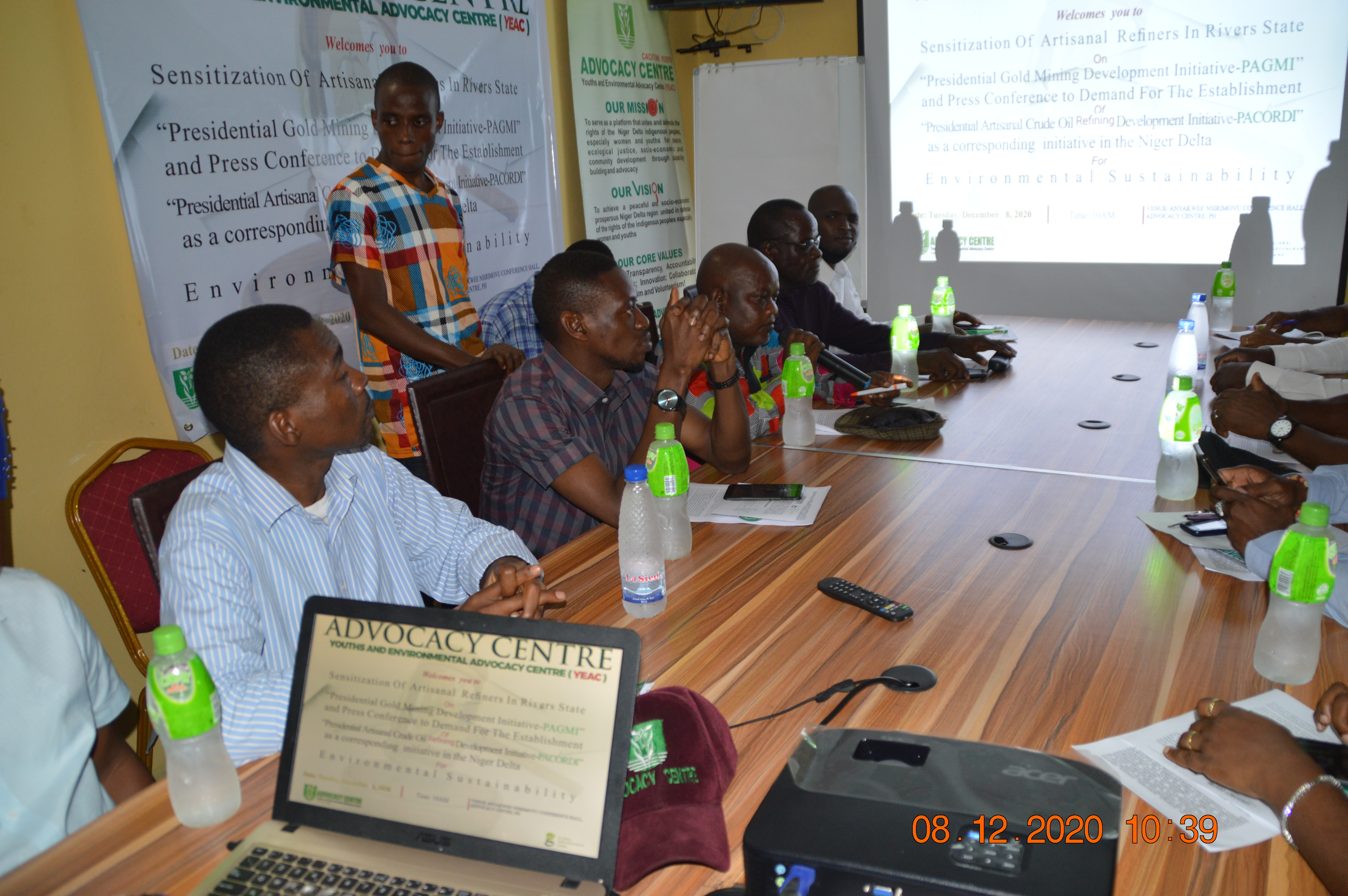 Also speaking, another participant from Bille Kingdom, Isaac Ofori called on other stakeholders like political leaders, relevant government ministries, south-south leaders and the governors of Rivers, Bayelsa and Delta States to partner with Advocacy Centre to demand for PACORDI from the Federal Government with Rivers, Bayelsa and Delta as pilot states. Mr. Isaac called for the involvement of the office of the Senior Special Assistant to the President on Niger Delta and Presidential Amnesty Programme to be involved demanding for PRESIDENTIAL ARTISANAL CRUDE OIL REFINING DEVELOPMENT INITIATIVE for youths involved in artisanal crude oil refining. Isaac also advocated for Advocacy Centre and a committee he suggested to be set up to reach out to community leaders and local government chairmen for partnership and to talk to the Governors and government to embrace this initiative for the artisanal refiners for environmental sustainability. 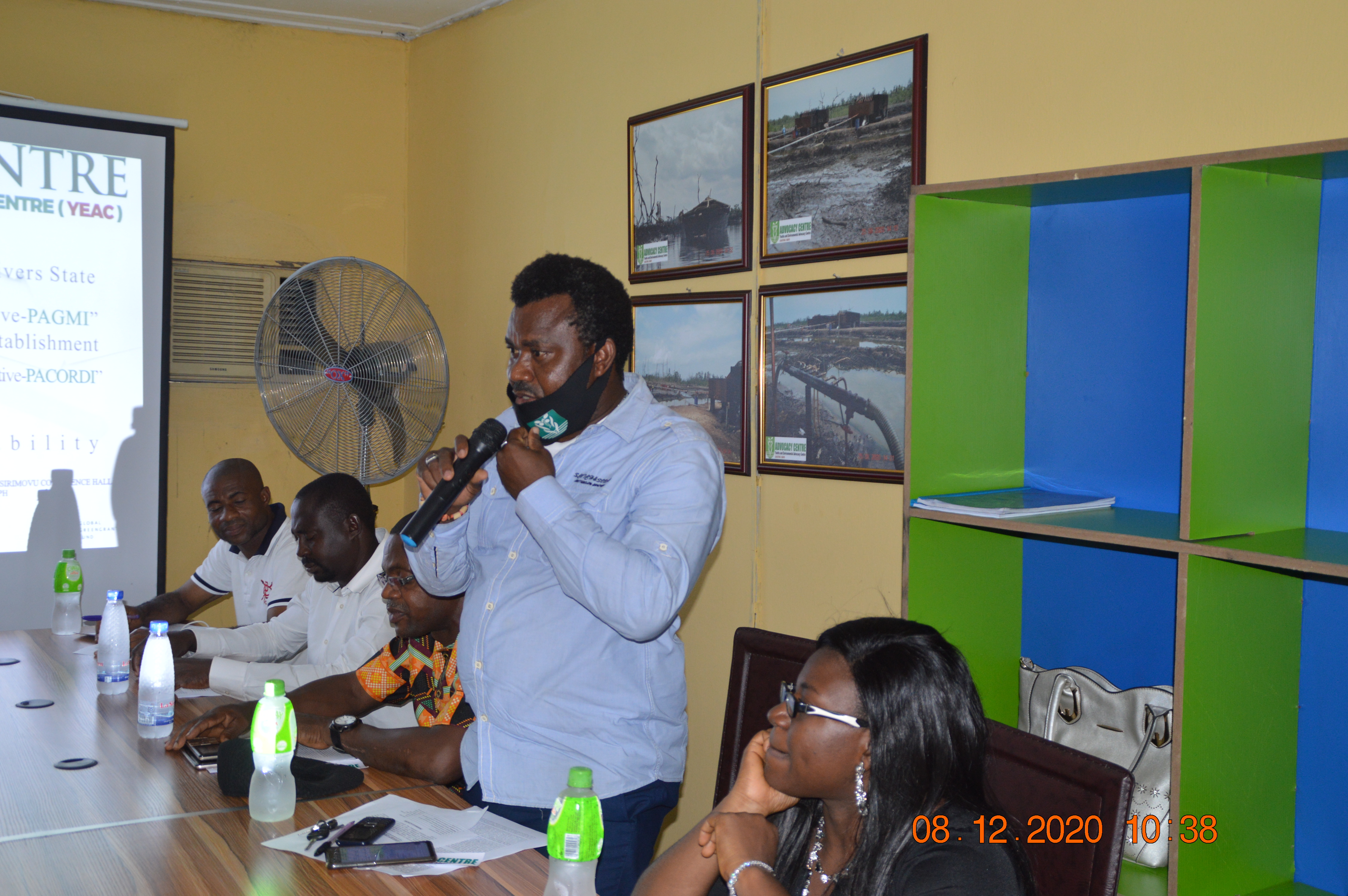 Lucky Nte from Ataba Kingdom in Andoni Local Government Area said PRESIDENTIAL ARTISANAL CRUDE OIL REFINING DEVELOPMENT INITIATIVE is one of the best tools that the Federal Government can use to address issues of environmental pollution in the Niger Delta by managing the artisanal refiners. He called on YEAC to partner with other groups including the Ijaw Youth Council (IYC) and other stakeholders to develop the idea for the youths to safe our environment. 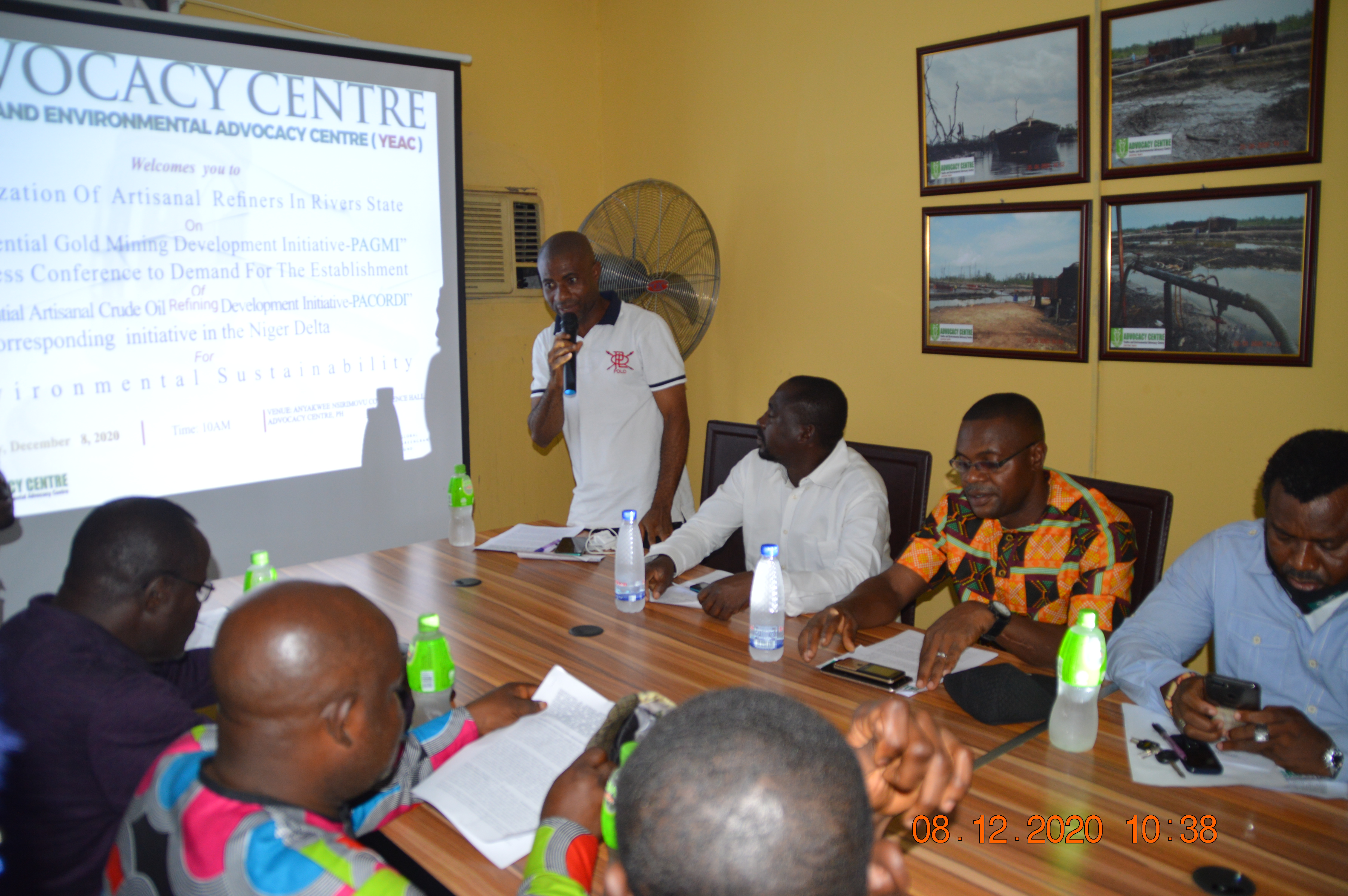 Also contributing, Gad Gideon from Eteo Community in Eleme Local Government Area suggested a more robust stakeholders meeting on PRESIDENTIAL ARTISANAL CRUDE OIL REFINING DEVELOPMENT INITIATIVE and involvement of other organizations that can join YEAC to amplify the call that PACORDI would be achieved within the shortest possible time.

In a call to action, the artisanal crude oil refiners in Rivers State and stakeholders at the sensitization workshop said “It is against these backgrounds that we demand and call on the Federal Government to establish “PRESIDENTIAL ARTISANAL CRUDE OIL REFINING DEVELOPMENT INITIATIVE–PACORDI” like the “PRESIDENTIAL ARTISANAL GOLD MINING DEVELOPMENT INITIATIVE-(PAGMI)” as a corresponding initiative for artisanal crude oil refiners in the Niger Delta for environmental sustainability in the region” 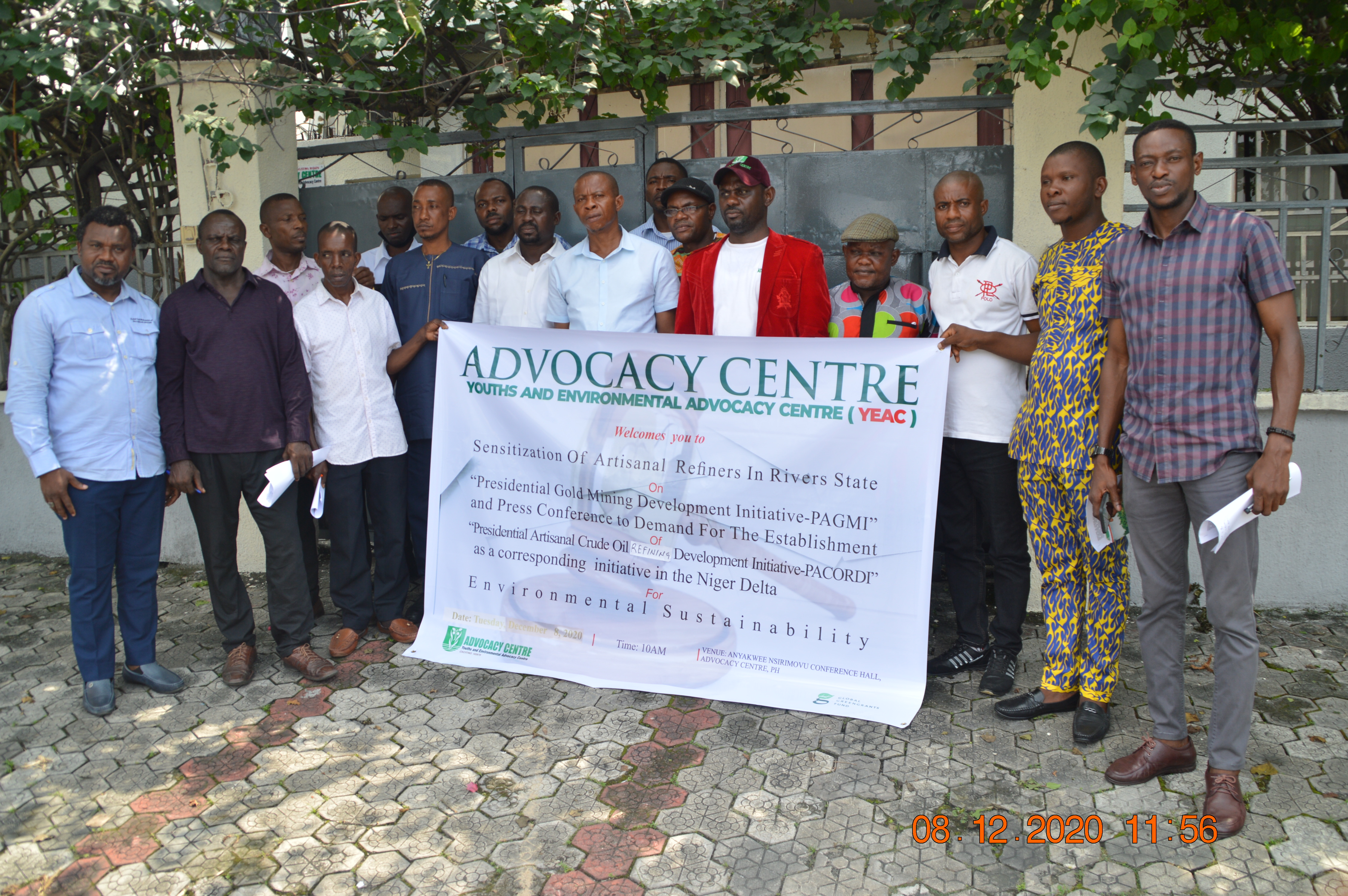 FYNEFACE DUMNAMENE FYNEFACE, who is also an Environmental Justice Activist and Human Rights Defenders and said PRESIDENTIAL ARTISANAL CRUDE OIL REFINING DEVELOPMENT INITIATIVE function alongside Modular Refineries promised by the Federal Government in 2017 for artisanal refiners in the Niger Delta. Adding that as suggested, a Steering Committee on PRESIDENTIAL ARTISANAL CRUDE OIL REFINING DEVELOPMENT INITIATIVE would be considered to collectively work together and reach out to other stakeholders for the achievement of PACORDI for artisanal crude oil refiners for environmental sustainability in the Niger Delta and thanked Global Greengrants Fund for supporting the sensitization and other programs of Advocacy Centre and that other partners and funders are also needed.