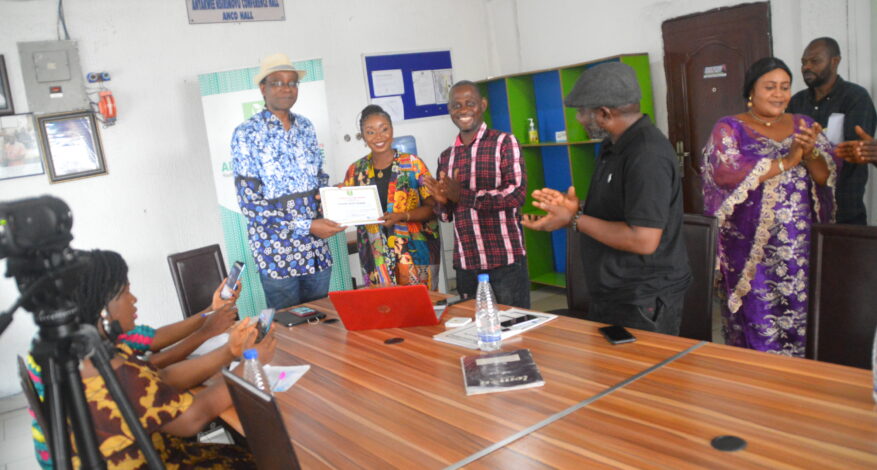 Right Livelihood Award Laureate, Times Magazine Hero of the Environment (2009) and Director of Health of Mother Earth Foundation (HOMEF), Rev. Nnimmo Bassey has presented certificate of appointment to Miss Udoka Ruth Ochor as Youths and Environmental Advocacy Centre’s (YEAC) “Women and Girls’ Rights Advocacy Ambassador” on behalf of the management and staff of the organization. The event which held on March 11 took place at the organization’s head office in Port Harcourt, the Rivers State capital. 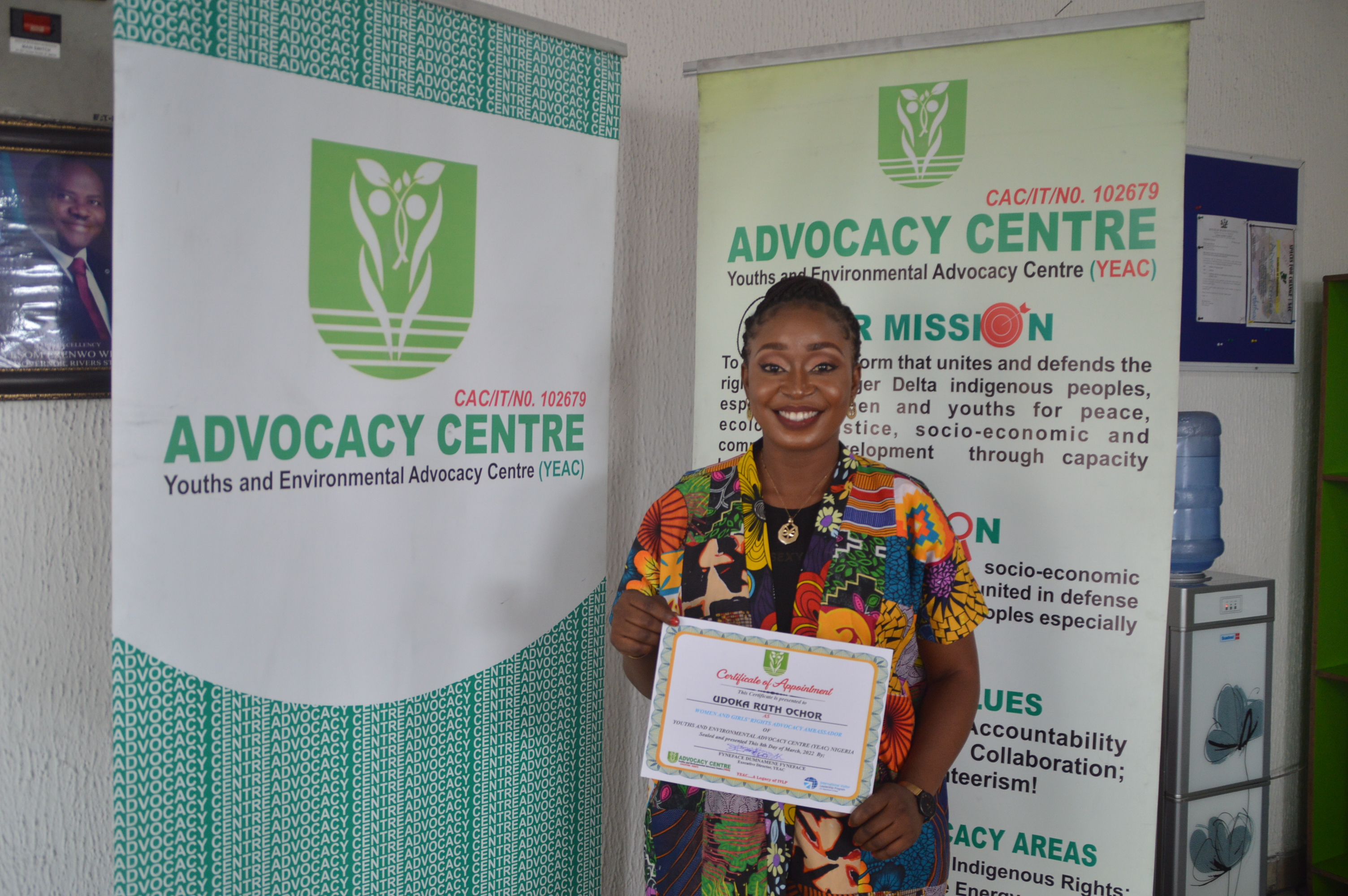 Miss Udoka, a passionate gender, women and girls’ rights advocate was on March 8 appointed by Advocacy Centre as its ambassador of Women and Girls rights as part of activities marking the 2022 International Women’s Day with the theme “BREAK THE BIAS”. Nnimmo who is also an environmentalist, poet and Rafto Prize winner (2019) performed the role as part of activities marking his maiden and historic visit to Advocacy Centre in company of two Norwegians and Kentebe Ebiarido, Project Coordinator, Oil Watch Africa among others. Introducing the ambassador to the Laureate, the Executive Director of Advocacy Centre, Fyneface Dumnamene Fyneface said Udoka had been a member of the organization’s “One Million Youth Volunteers Network of Human Rights Defenders and Promoters in the Niger Delta” and had been vocal and active in gender and girls’ rights advocacy, adding that her appointed is a call to greater service and to encourage her to do more for the women and girls for a better society. He congratulated the ambassador on her new role on behalf of the organization and urged her to see her appointment as a call to greater service especially for women and the girl-child who are facing challenges in society. 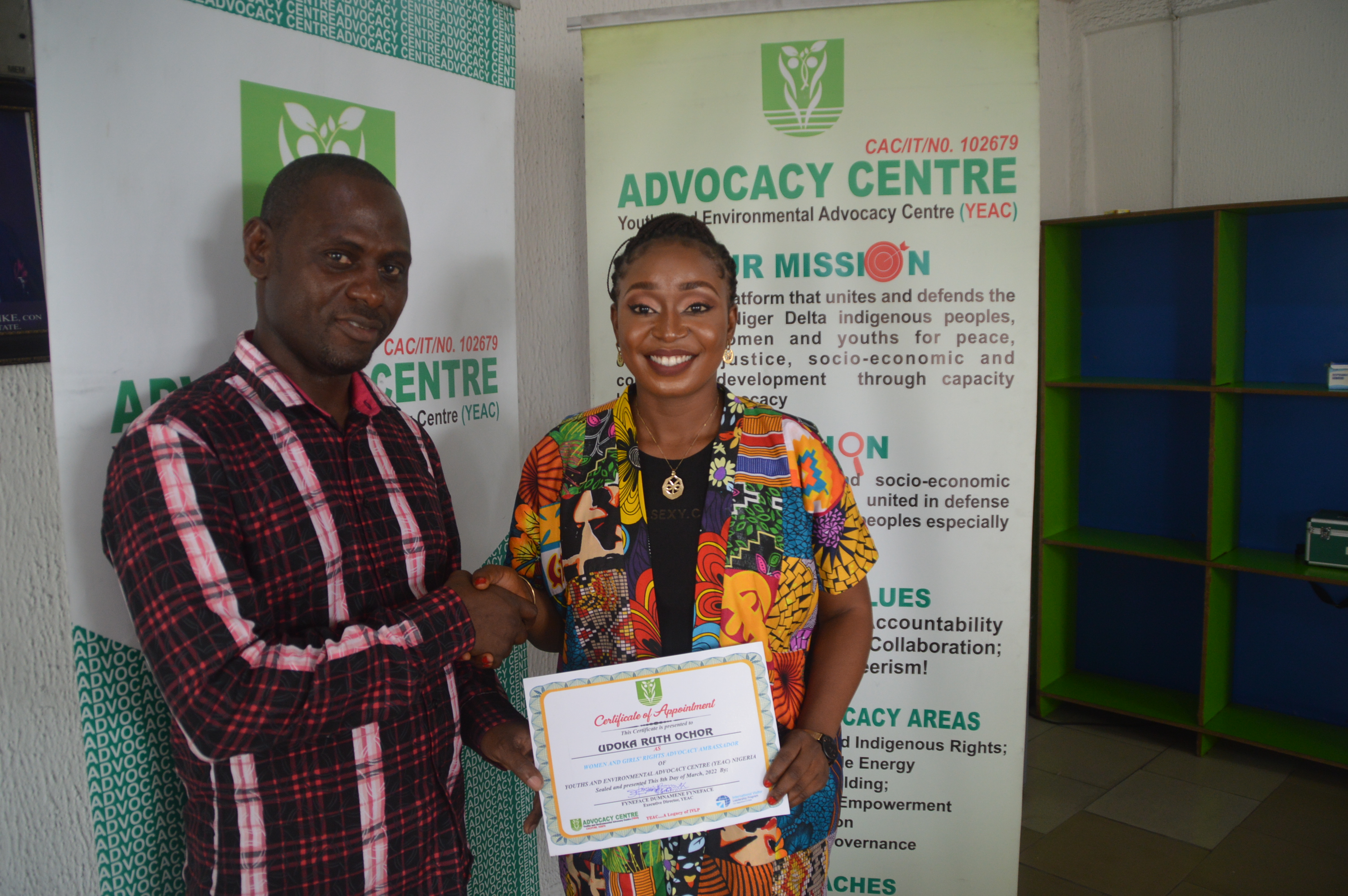 Speaking during the event, Nnimmo congratulated the ambassador on her appointment and reminded her of the responsibility that lies ahead of her as the Women and Girls’ Rights advocacy ambassador. 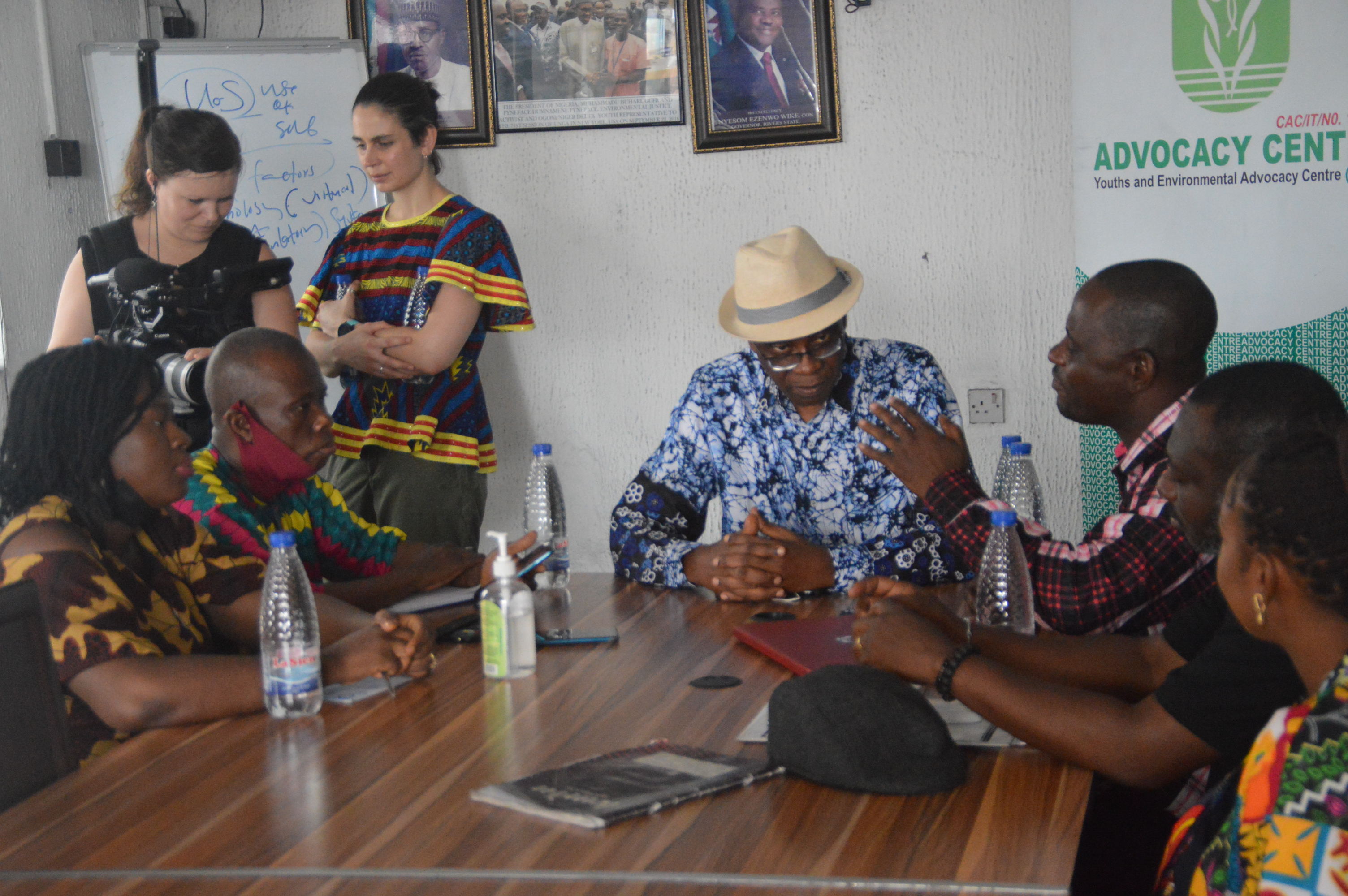 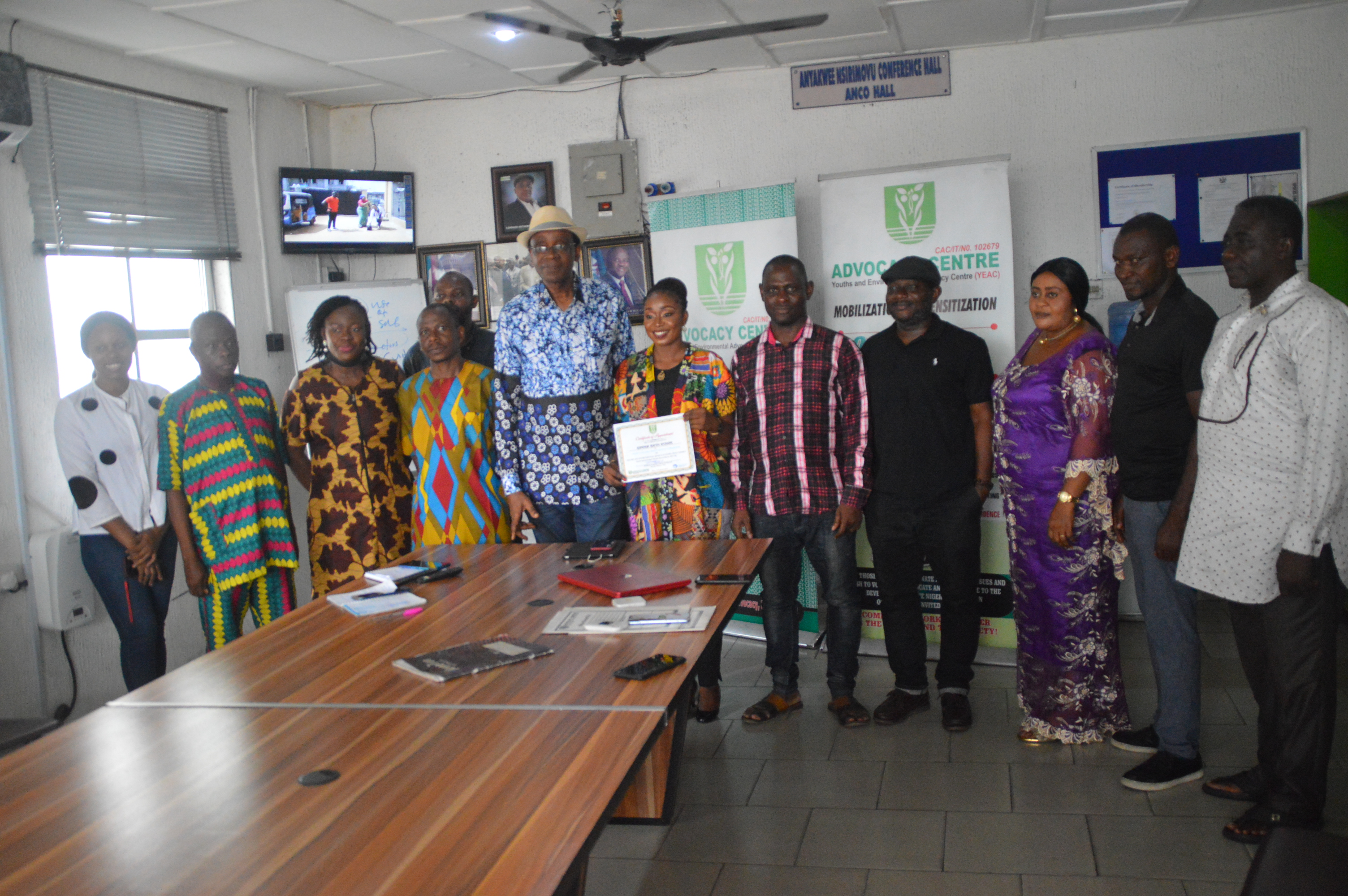 In her acceptance speech, Udoka thanked Advocacy Centre for the opportunity given her to service and said her reign would be used to sensitize and change the mindset of women and the girl-child with a view of liberating them from the shackles of discrimination, domestic and gender-based violence, rape and to support them achieve their potentials in society. 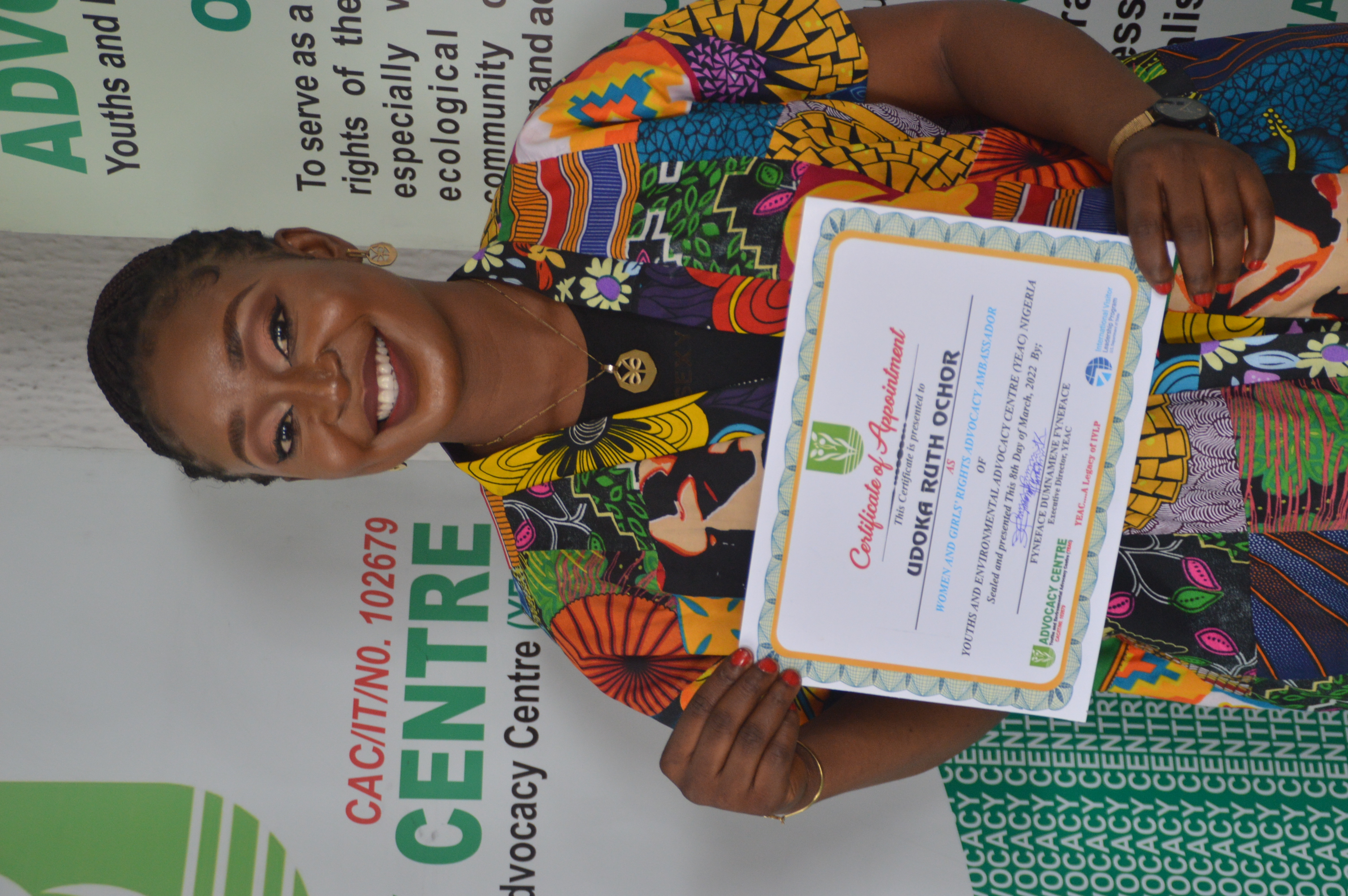 UDOKA RUTH OCHOR is a passionate women and girls’ rights advocate, human rights defender, social crusader and a researcher. She had worked in the private sector as a business development manager with Adriot Global Services Nigeria Ltd, co–authored three different publications on different subject–matters including dangerous illicit drugs, methamphetamine hydrchloride and obscene images on Facebook. She had also gathered working experiences with 042 Xclusive magazine and Solid, 100.9FM, Enugu, Enugu State. Udoka has been a member of Youths and Environmental Advocacy Centre’s (YEAC) “One Million Youth Volunteers Network of Human Right Defenders and Promoters in the Niger Delta” since 2020 and her commitment to women and girls rights issues, human rights and social justice spotted her out for recognition and appointment for further responsibility as Advocacy Centre’s “Women and Girls’ Rights Advocacy Ambassador”.

Her appointment which was effected on March 8, 2022 was part of the Advocacy Centre’s activities marking the International Women’s Day with the theme “BREAK THE BIAS” with a view of having her work to break the bearers against women and girls through a more dedicated and focused advocacy for the liberation of women and the girl-child in the Niger Delta and Nigeria in Nigeria. Academically, Udoka studied Mass communication from the Enugu State University of Science and Technology and graduated in 2012. She then proceeded to the Institute of Customers Relations for Postgraduate Diploma in Customer Relationship Management and graduated in 2014. In 2019, Udoka was awarded a Master’s Degree in Communication Studies by the University of Port Harcourt where she is also currently a PhD student.