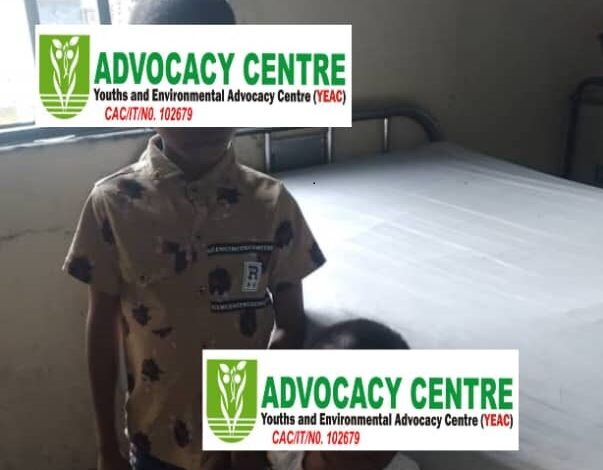 July 13, 2022By admin0 comment
Youths and Environmental Advocacy Centre (YEAC) is working with a divorcee and single mother of two in Rivers State whose children were being raped repeatedly since May till it was discovered on July 7, 2022 to demand justice for the minors. The mother of the children, Princess Pius who reported the matter to Advocacy Centre on July 11 said she got to know about the repeated rape when she noticed fresh blood on the anus of her son who was crying.
She said her six year old son; Dominion told her that the rapist, Promise Mbaedee Sympathy threatened to kill him if he tells the mother or anyone else what he was doing “in his bombom” and that of his little sister, Grace. Princess further told YEAC that her daughter, Grace is less than two years of age as she was delivered of her on 24th September, 2020.
The alleged rapist, Mr. Promise Mbaedee Sympathy according to Princess hails from Bunu Community in Tai Local Government Area, the same community as her. He is said to have been employed as a sales boy by Princess Pius’ younger brother, Confidence Pius. They all live in a single room batcher at Rumuodara in Obio/Akpo Local Government Area of Port Harcourt, Rivers State.
Udoka Ruth Ochor , Advocacy Centre’s Women and Girls’ Rights Advocacy Ambassador who is handling the matter on behalf of the organization reports that the matter has been reported to the Okporo Road, Rumuodara Police Division and the rapist arrested with Inspector Samuel Okwudili as the Investigation Police Officer (IPO).
Speaking to the Executive Director of Youths and Environmental Advocacy Centre (YEAC), Fyneface Dumnamene Fyneface on the matter, Inspector Samuel expressed joy over the involvement of YEAC as a human rights organization and commits that the Police will work with YEAC to get justice for the minors. He further told YEAC’s Executive Director that both he and the Divisional Police Officer of the Station are worried about the matter as the complainants have not returned to the station since the matter was reported and the suspect arrested. He further said the doctor’s report form given has not also been returned to enable the Police charge the suspect, Mr. Promise Mbaedee Sympathy to court. 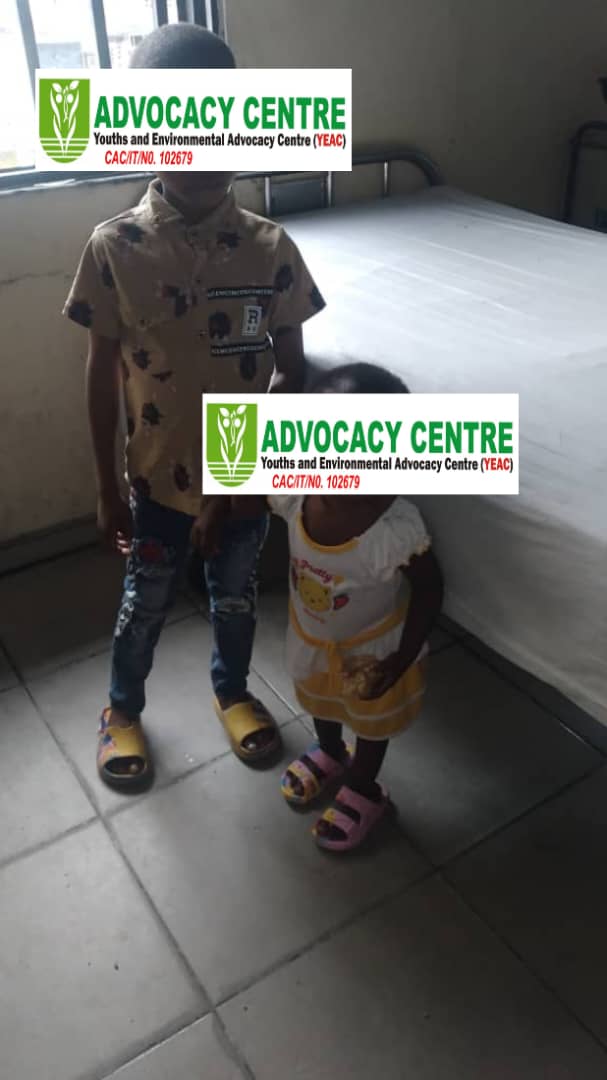 When interrogated by YEAC’s Executive Director, Mr. Fyneface to compare and verify the age of the suspect to avoid the “Ekweremadu-Gate” over alleged organ-harvesting of a ‘minor’ in the United Kingdom, the IPO said the age of the suspect as given to the Police is “15years”. Adding that at 15, the age also places the suspect in the minor’s bracket, making him a “Juvenile Suspect”.
YEAC’s Women and Girls’ Rights Advocacy Ambassador, Udoka with the aid of doctor’s report form from the Police station promptly called “Doctors Without Borders” on Monday evening, reported the rape incidents and was asked to come with the children immediately on Tuesday morning for medical attention and examination.
Although the children’s mother learnt about the rape (which her son said had happened many times between May and July) on Thursday, July 7, it was reported to Advocacy Centre by the evening of Monday, July 11 and despite the holidays, the organization took steps to ensuring that the children were taken to the hospital for medical attention on Tuesday, July 12 and medical report is being awaited as at the time of this report.
Mr. Fyneface, condemns the action of Mr. Promise Mbaedee Sympathy on the minors. Adding that the rapist has neither been ‘sympathetic’ to the young innocent children nor his future ‘promising’ if he does not desist from raping children as a teenager. He further said YEAC will work with the Police and other relevant organizations including FIDA and Rivers State Child Protection Network among others to get justice for the minors to serve as deterrent to others who may be contemplating rape in the society.